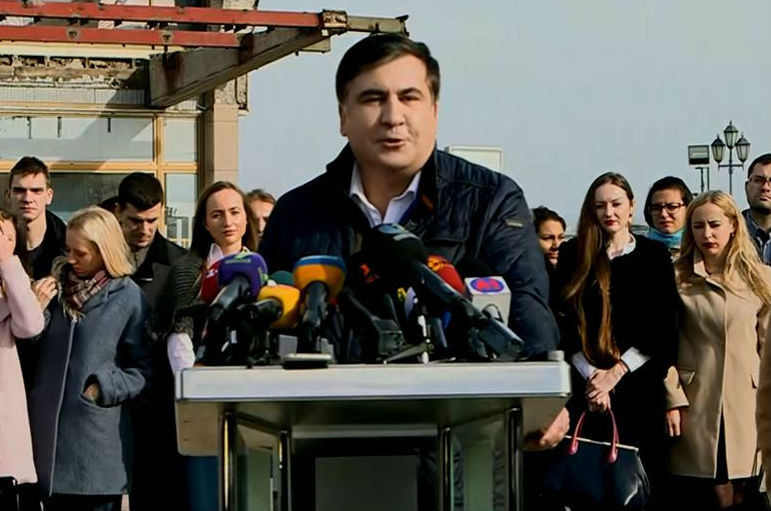 Mikheil Saakashvili’s resignation this week does not mark the failure of reform efforts in Ukraine. It opens a new chapter.

“Odesa can only develop once Kyiv will be freed from these bribe takers, who directly patronize organized crime and lawlessness,” he bluntly told journalists when he announced he was quitting on November 7.

This opinion was hardly “news.” Ukraine is vice-ridden and he was recruited to deal with criminality.

What is new, however, is that he is pivoting into politics. Working inside the system cannot transform the country. Only the ballot box can, along with hefty pressure from both the street and the West. Saakashvili underscored this strategy when he added: “We will definitely unite and finish this fight, bringing victory to Ukraine. The fight continues.”

The “fight” is necessary and must pivot away from divisions among reformers to the creation of a cohesive reform political coalition capable of defeating Ukraine’s ruling elite.

It won’t be easy; only two percent of Ukrainians said they’d vote for the party Saakashvili has been associated with if elections were held now.

But last week’s e-declaration revelations will be enormously useful by quantifying, for the first, the scale of looting in Ukraine.

Disclosures by 50,000 officials were jaw dropping, particularly the fact that 413 members of parliament hold $480 million in cash and deposits not including other assets. Another 50,000 declarations will be published in January.

Worse, this was only the tip of the iceberg because of gaps and loopholes in the disclosure requirements. Now conditions exist to try and take over the government itself, even before the next parliamentary elections in 2.5 years. Populists would like nothing more.

Now is the time to unify reformers of every persuasion and party from Saakashvili to Savchenko, activists, civil society, and the hundreds more in office in common cause.

Arguably the creation of such a coalition is prerequisite to win but also to govern.

Now is not the time to throw in the towel. Ukraine doesn’t need another firebrand or another political party. It needs many firebrands and parties willing to subordinate their egos to overthrow the oligarchy.

They also must join forces to push through better reforms and prevent more slippage or sabotage. Even though the disclosure laws are transformational they are badly flawed and must be improved.

For instance, Ukrainian lawmaker with President Petro Poroshenko’s bloc, Sergii Leshchenko claimed that Poroshenko had entered incomplete data in his declaration by not itemizing the eighty-four valuable paintings he owns as stipulated in the law.

Some of these works of art are masterpieces, according to Leshchenko, such as paintings by Sandro Botticelli or Flemish Baroque painter Peter Paul Rubens. To omit these dramatically reduces the magnitude of his wealth.

The law also lets culprits off the hook. Disclosures are based on the honor system and there are suspiciously few declarations about offshore assets. Even worse, reports are that roughly one thousand judges from the corrupt regime of former President Viktor Yanukovych resigned rather than declare their assets. (Obviously, any disclosure law should stipulate that any public official since the 2014 elections declare their assets even if they quit.)

Ukraine’s war against corruption is ongoing because it also a war of attrition. The regime entertains reforms, then erodes or replaces them with laws that neutralize their benefits. Reformers are appointed, then cast adrift in a sea of lawlessness, or quit in frustration.

Two attacks have been mounted against the newly-minted National Anti-Corruption Bureau and the High Council of Justice which monitors and disciplines the judiciary.

The Prosecutor General is attempting to have his agency overtake the Bureau’s jurisdiction. Then there is another law, passed by parliament and signed by Poroshenko recently, that defangs the Council by exempting Yanukovych-era judges from discipline by guaranteeing them seven-year terms.

“Nobody’s punished,” said parliamentarian Hanna Hopko. “There is still no justice because the judges have not been reformed. We are disappointed with progress, but this is a marathon not a 100-meter foot race.”

Rooting out systemic corruption is a daunting challenge but Ukraine’s regime has pretended it’s in favor of reform and is running out of excuses.

Compare its foot dragging to the fact that Estonia, East Germany, and Georgia dismissed all their judges after the Soviets disappeared. Ukraine may have a bigger system but a good start would be to give the Public Integrity Council the power to ban the appointment of untrustworthy judges.

Besides time is running out, suggested Presidential Advisor Leszek Balcerowicz of Poland. He emphasized, to a Toronto audience this week, that this year is critically important. “You have 2.5 years before the next election so this year is critical,” he said. “The diaspora must play a role.”

Western governments must increase pressure, according to Leshchenko and others, and extend sanctions in Ukraine to include those who were part of Yanukovych’s inner circle and are still pulling the strings.

To be fair, reformers should be proud that more reforms have taken place since the Revolution of Dignity than ever before in Ukraine’s history.

But the next step is all-out political mobilization and a reconstitution of reform efforts by individuals who will put country ahead of their ambitions, party or ideology.

The people of Ukraine deserve no less and the scoundrels in high office deserve to be driven out and prosecuted.