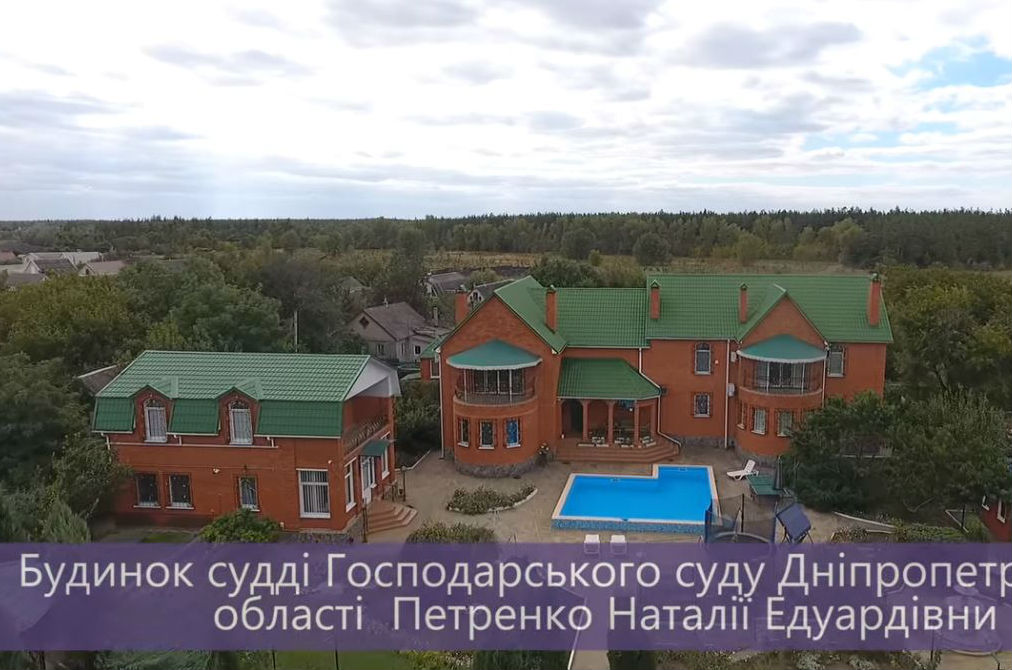 A 2016 PROSUD investigation into Judge Natalia Petrenko, a judge in the commercial court of the Dnipro region, revealed that she owned a large house with a swimming pool and a church that was given to her as a “gift.” Credit: PROSUD screenshot

Exposing corrupt Ukrainian judges and prosecutors might sound dangerous, but for Kate Butko, it’s nothing compared to what she’s previously dealt with. Butko runs PROSUD, an eleven-person project founded in 2016 by activists from the Automaidan, an anticorruption nongovernmental organization that organized car owners during the Euromaidan. Funded by the National Endowment for Democracy and the United Nations Development Program, PROSUD focuses on exposing corrupt judges and prosecutors.

But back in March 2014—days after Russian “little green men” had fanned out across Crimea—judicial corruption was the last thing on Butko’s mind. Butko had journeyed to Crimea to see the situation first-hand but instead found herself kneeling in a ditch suffering beatings from former Berkut officers who had pulled her and a colleague from their car once they recognized Butko as a Maidan activist. Butko ended up in a jail cell in Sevastopol guarded by men with balaclavas and denied all contact with relatives or a lawyer. As the experience of the Kremlin’s Ukrainian hostages like Oleg Sentsov demonstrates, things could have ended far worse; she was allowed to return to mainland Ukraine after three days of interrogations and threats.

Her experience in Crimea and a subsequent experience in Luhansk in May 2014, where she was dragged from a hotel by armed militia and interrogated for several hours, steels Butko against the frequent threats she and her colleagues receive. It helps that Butko believes passionately in PROSUD’s mission.

Judicial reform “was one of the biggest expectations after the Euromaidan. This didn’t happen, though… So, we decided to focus our attention on the judges,” says Butko. “Since the promised reformation of the prosecution system was also not carried out, we decided to shine a light on prosecutors, too,” she adds.

PROSUD has followed a four-step process in its fight against prosecutorial and judicial corruption. To start, PROSUD’s team scours and analyzes open source databases—particularly judges’ and prosecutors’ e-declarations—and then compares this information with data from property registers, looking for discrepancies.

If they believe a judge or prosecutor has acquired property improperly, they actually visit officials’ houses and use quadcopter drones to film the real estate to support their case. Physically visiting the site allows PROSUD’s team to uncover information that isn’t available by just reading public declarations or property registers. Butko points to the case of Volodymyr Torovanin, the first deputy prosecutor of Ivano-Frankivsk region. Butko’s team discovered Torovanin was using a home in the Carpathian Mountains as a hotel but not including this income in his declaration.

“We have passed this information to the National Anticorruption Bureau of Ukraine and they launched a criminal investigation. However, if we limited ourselves to analyzing Torovanin’s declaration, the only thing we could have found out is that he had had a house, and this would not have been enough to push criminal charges against him,” explains Butko

Powerful officials used to acting with impunity aren’t happy when Butko and her crew show up, and some troubling incidents have occurred. “While we were filming the house of an influential prosecutor, an unknown person shot our quadcopter with a firearm. There have also been several cases where we were physically blocked from filming as well. Thankfully, no one’s been hurt yet, and we now have compiled a video database of over 400 properties which we believe corrupt prosecutors and judges may have acquired with stolen money,” explains Butko.

The third step is to take the results of PROSUD’s completed investigations and publish it on a website where it is available to journalists.

Finally, the team focuses on going after suspect prosecutors and judges by pushing law enforcement agencies like the National Anticorruption Bureau of Ukraine (NABU) to begin their own investigations. As a result of PROSUD’s work, NABU and the Prosecutor General’s Office have initiated over twenty criminal proceedings against judges and prosecutors suspected of corruption.

“Our investigations were also very useful for the Public Integrity Council during the competition to fill the vacancies in the Supreme Court. Based on the information we provided, several judges were dismissed from the competition,” notes Butko.

In spite of the endless corruption Butko sees every day, she doesn’t consider the Euromaidan a failure. While disappointed with the pace of change in Ukraine, she and her team are in it for the long haul. “We remember the price that was paid during the Maidan for us to live in a successful, corruption-free country,” she emphasized.

It is critical that Western donors continue to support grassroots citizen-driven projects like PROSUD. While donors should continue to fund the government’s key anti-corruption institutions like NABU, it’s critical they avoid supporting the National Agency for the Prevention of Corruption, which is mired in corruption. Not only does this waste millions of dollars, but it can also provide a veneer of legitimacy for corrupt officials—the last thing the West should want to do.

In the long term, Ukraine can still fulfill the promise of the Euromaidan—and activists like Butko will help it get there.

Editor’s note: The Atlantic Council is publishing a series of articles about women making a difference in Ukraine’s ongoing reform process. This is the second in the series. The first piece is available here.