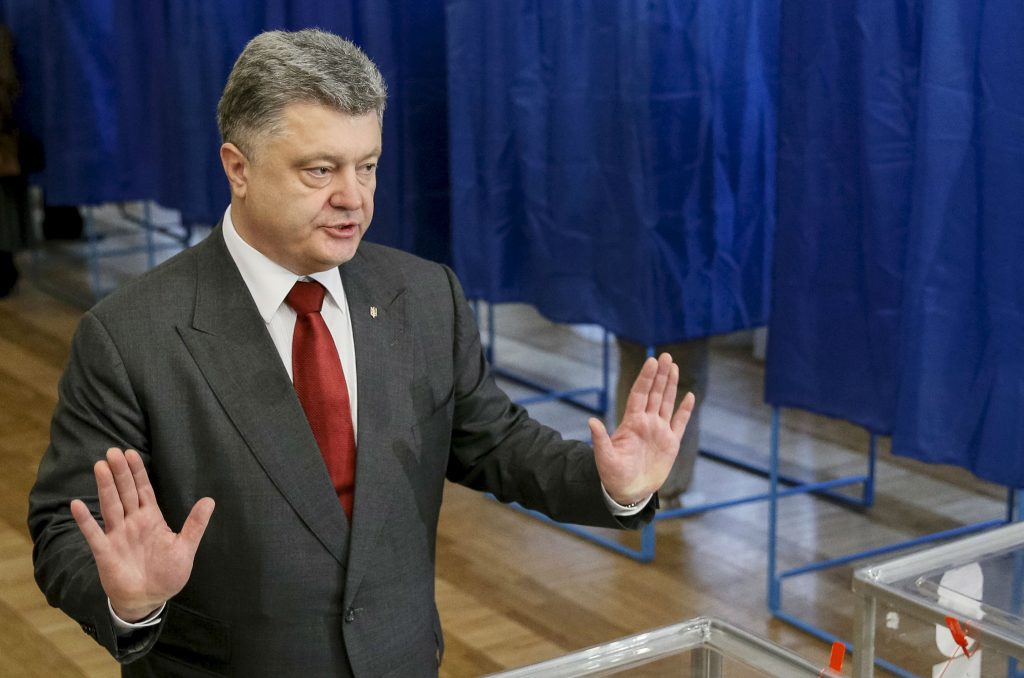 Ukrainian President Petro Poroshenko talks to the media as he visits a polling station during a regional election at a polling station in Kyiv, Ukraine, October 25, 2015. Ukrainians go to the polls on Sunday to appoint mayors and council heads to regional seats. REUTERS/Gleb Garanich

Should Ukraine hold new elections? Despite the failure of Ukraine’s parliament to remove the government of Prime Minister Arseniy Yatsenyuk from office on February 16, the defection of two parties from the governing coalition gives President Petro Poroshenko the ability to declare the absence of a majority coalition and force new elections.

Western donors, including the IMF and the leaders of the United States and the European Union, have bluntly demanded that Kyiv foreswear elections and handle any government reshuffle through an agreement within the existing parliament.

The West argues that Ukraine cannot abide months of a lame duck government, political uncertainty, and potential deadlock post-elections. Western leaders assert Ukraine cannot afford to be plunged into potential political turmoil at a time when Europe and the United States are to make decisions about the extension of sanctions against Russia, a new IMF tranche is due, and Ukraine is expected to make legislative changes to meet its Minsk cease-fire obligations.

Intelligent defenders of Ukraine’s reform, including Anders Åslund, argue that Western leaders are wrong. Elections can spur a new wave of reform, Åslund states. This view is shared by anticorruption fighters and honest reformers in the Rada, who want to strengthen their hand in the bargaining over government appointments.

But the case for new elections is flimsy for four reasons.

First, the evidence from other transition countries shows that new elections often lead to the comeback of forces who oppose reform. Such was the case in Poland’s transition—Central Europe’s showcase for successful change—where the collapse of Solidarity’s forces in 1992 led to the return of members of the corrupt old order. In that period reforms were not driven by the ascendancy of reformers, but by Western pressure and inducement from looming EU accession.

Second, elections will be costly and give Ukraine’s oligarchs even more control. Ukraine’s 2014 presidential election was estimated to cost $215 million and Rada elections are even more expensive. Campaigns paradoxically increase the influence of business and oligarchic interests on cash dependent political parties and increase the importance of their control of Ukraine’s five most popular TV stations.

Third, the idea that reformers would score serious gains is contradicted by recent polling data. Ukraine’s electorate is deeply fragmented and support for populist and nationalist parties is on the rise. A February poll of voter preferences by the Gorshenin Institute showed nine political parties capable of entering the next parliament with none backed by more than 13 percent of the electorate. Ukraine’s single-mandate districts, which represent half of the Rada seats, are also likely to result in additional fragmentation as local business interests are likely to compete or make deals with political parties to gain additional patronage advantages.

Western leaders rightly understand that new elections are no guarantee of a new stable majority, not to speak of a majority committed to reform. In fact, early elections could have the opposite effect intended by well-meaning reformers. While it is likely that a handful of additional pro-reform deputies could be elected, the creation of new coalition would require sharing even more ministries with political appointees or oligarch-beholden proxies, not technocratic and politically independent change agents like Aivaras Abromavicius or Natalie Jaresko. Or, even worse, early elections could result in unresolved long-term political deadlock without a majority government.

And this raises the fourth problem: Ukraine is at war with Russia, and under attack from Russia both economically and militarily. A country under siege needs as much predictability and consensus as it can summon.

There is a way out. It requires Poroshenko to use his still considerable influence to press the current parliament—which has a more promising configuration than the fragmented mess that would ensure from early elections—and its leaders to seek a compromise based on four principles:

There are some signs that such a compact could be negotiated.

And there is a chance that with the country facing economic stagnation and deadlock, even rapacious oligarchs recognize the old system’s days are numbered and have reckoned and that an evolutionary transition is better than economic collapse and turmoil that could threaten their economic interests.

The path to stability in Ukraine is for intelligent compromise between the elites, including the reformist elite, civil society, the business elite (including the oligarchs), small business, and professional politicians.

Such a compromise can be struck. And if it is struck, that would be evidence of a real revolution in Ukraine’s business-as-usual politics.

Adrian Karatnycky is a Nonresident Senior Fellow at the Atlantic Council’s Dinu Patriciu Eurasia Center and co-director of its Ukraine in Europe Initiative. He tweets @MyrmidonGroup.