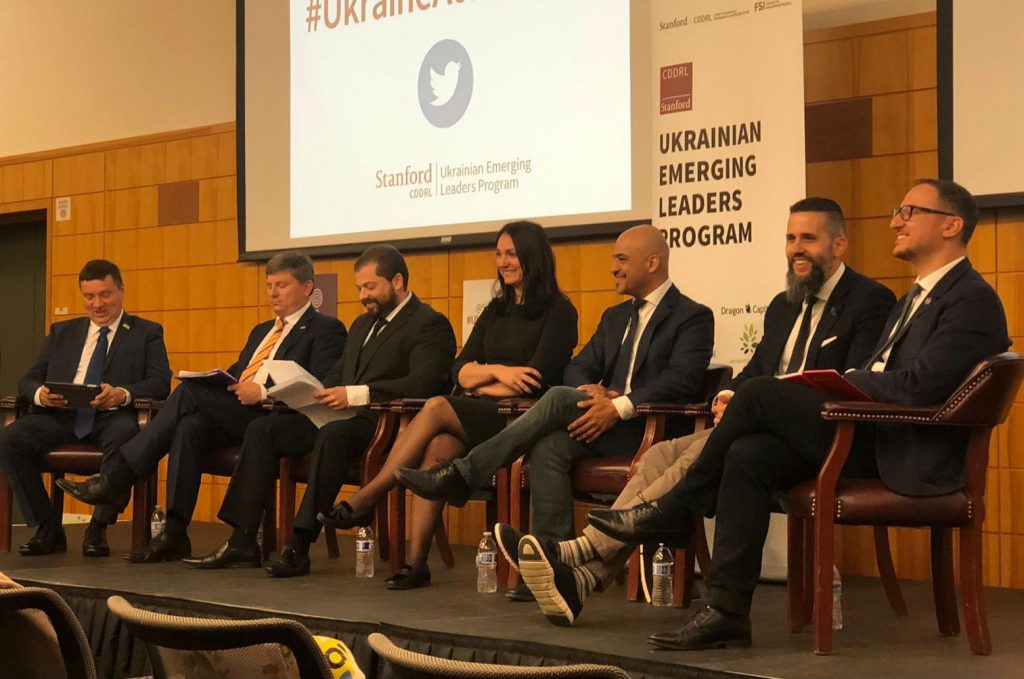 Five years after the Euromaidan street protests, Ukrainians are still waiting for transformative leaders and justice. On May 20, political newcomer Volodymyr Zelenskiy will be sworn in as president. But that won’t necessarily result in a significant change for the country: Ukraine’s next president is inexperienced and his links to oligarchs are troubling. Its parliament, the least trusted body in the country, makes the most important decisions and appoints the government. And there are signs afoot that the forces there will be anything but new.

Ukraine holds its parliamentary elections on October 27. Now that the May holidays have passed, politics is in full swing and every politician is preening and gearing up for the next fight. As of now, however, legislators and candidates pushing for justice can’t work together. And the most popular politicians largely represent the same old corrupt elite.

At Stanford last week, we got a preview of what’s to come. Six politicians from Ukraine’s leading reform-focused political parties and civic movements (plus one from the Bloc of Petro Poroshenko, whose reform credentials are dubious at best) paraded on stage to explain their platforms, relitigate past decisions, and urge the West to give them more time to finally unify.

Nayyem, a fiery investigative journalist turned politician and the man credited with igniting the Euromaidan protests with his call on Facebook to do more than simply “like” posts, told the crowd that his country’s reform parties need two more weeks to unify.

Color me skeptical. Nayyem has been saying the same thing for 52 weeks. What difference will two more make?

Last year Nayyem and others tried to unify Ukraine’s clamorous opposition behind a single presidential candidate and failed, even after multiple attempts.

Everyone kept waiting on rock star Slava Vakarchuk to save the day. Slava waffled and eventually decided that he doesn’t have the stomach for high-level politics. Zelenskiy seized his opportunity and the rest is history.

Fast forward to today. Ukraine’s reformers know what they need to do to make Ukraine a decent, normal, European country, but they can’t even form a single party. Nayyem may be right—he may be able to merge his group Dii z nami with Lyudi Vazhlyvi, another new center-right civic movement that is registering as a political party on May 25. It’s also possible that others, such as Hanna Hopko, acting Health Minister Ulana Suprun, and potentially Vakarchuk, would join this effort.

Even if a miracle happens and Ukraine’s reformers unify, at best they get 8-10 percent of the vote. None have access to the major television networks. None have nationwide name recognition, beyond Nayyem. Even at 10 percent, there won’t be enough of them in the next parliament to make a difference.

The bigger picture isn’t pretty. The latest poll shows Zelenskiy’s party leading with 26 percent, followed by the pro-Russian Opposition Platform-For Life with 14 percent, BPP with 14 percent, Fatherland with 12 percent, Civic Position with 5 percent, Ihor Smeshko with 5 percent, and the Radical Party with 4.8 percent. The next coalition in Ukraine’s parliament will be fragmented, fragile, and not very focused on reform.

There’s still hope, though. Ukraine’s politics are undeniably messy and byzantine, but the West can still have a substantial impact. To do so, however, it must lean in. There are numerous things Western policymakers can do to encourage Ukraine to hold fast to its reforms, or even to push harder and faster in the next five years.

The West should publicly insist that Ukraine’s reformers unify, while privately working behind the scenes. Western donors should offer to hire a professional negotiator who knows the regional languages to ensure that unification among the reformers happens this time.

Even then, the math shows that unification is no panacea. The West needs to engage, encourage, and exhort Zelenskiy’s team to enact the anti-corruption agenda he promised as a candidate, and call him out loudly if he doesn’t. And Western governments should encourage the better angels within less reform-minded but still important parties such as BPP and Fatherland.

It’s also time for a rethink. The Western donor community is too timid. It’s trying the same boring programs that yield miniscule results by spreading its resources too thin. The West needs to focus its resources on a country where the demand for justice is high. Donors should build a long-term strategy to seed liberal, democratic ideas through a high-quality television channel that can actually compete with oligarch TV (the public broadcaster cannot compete), a nationwide radio station with correspondents across the country, and university programs that appeal to students and faculty. It will be expensive, but Ukraine is worth it.

Transforming Ukraine will take years. But the fruits of those efforts will pay off. Ukraine matters more than any other country in the region, and its example matters greatly to Russia.

The West should put every resource behind the fight to free Ukraine, and then some.

Image: At Stanford University on May 10, seven Ukrainian politicians outlined their policies and priorities. From left to right, they include: Oleksandr Danchenko, formerly with Sampomich; Artur Gerasymov with the Bloc of Petro Poroshenko; Mikhail Lev with Civic Position; independent Hanna Hopko, Mustafa Nayyem with Dii z nami; Maksym Nefyodov with Lyudi Vazhlyvi; and Olexiy Ryabchyn with Fatherland.