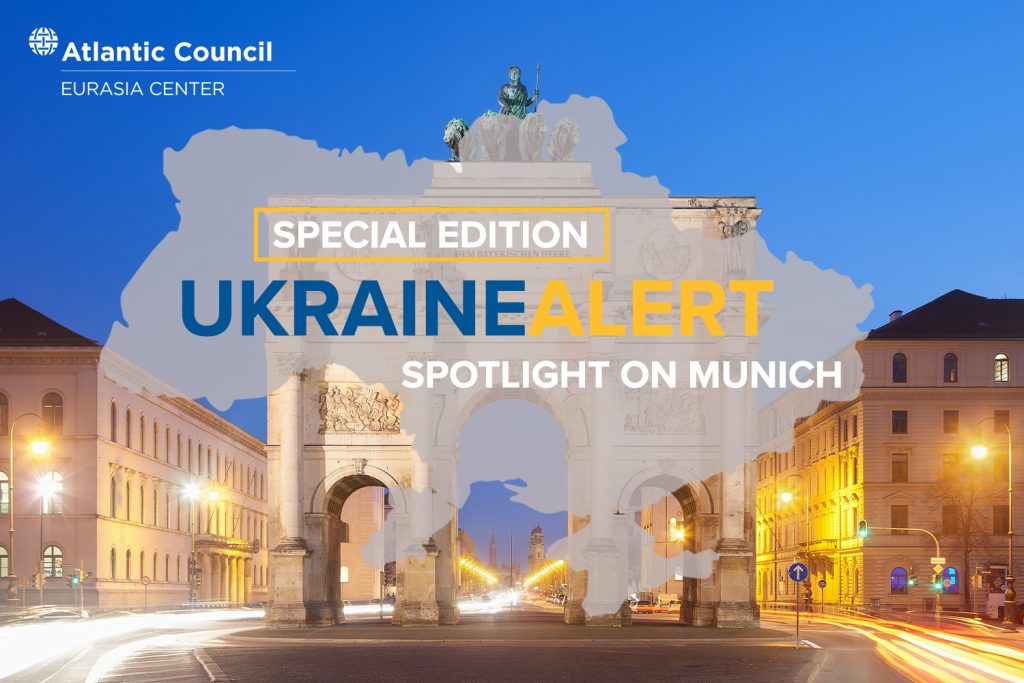 A distinguished group of American, European, and Russian former government officials and think tank experts has taken advantage of the Munich Security Conference to issue a statement recommending twelve steps to bring greater security to Ukraine and the Euro-Atlantic region. For years, the Kremlin has tried to change the conversation on Ukraine, and they are clearly seeking another opening in Munich. In response, twenty-nine former US diplomats, government officials, and experts point out their errors.

Most of the twelve recommendations from the Euro-Atlantic Security Leadership Group—if faithfully implemented by all parties—are constructive and could both serve as confidence-building measures and alleviate the difficulties and suffering endured by the population in or near the occupied Donbas.  Several are problematic; two in particular echo Kremlin negotiating proposals or disinformation themes.  More importantly, the document describes the problem to be resolved in Kremlin-friendly terms, perhaps in order to persuade members of the Russian elite to sign.

The signers identify the problem in their very first sentence: “the conflict in and around Ukraine.” That description obscures the problem’s origins and makes it impossible to find an appropriate solution.

“The conflict in and around Ukraine” began when Russian troops, in Russian uniforms but operating without identifying insignias, seized the Ukrainian peninsula of Crimea, and Moscow “annexed” it.  Moscow then launched its hybrid war in Donbas and used its massive disinformation apparatus to present this as a Ukrainian civil conflict. Without Kremlin leadership, financing, weapons (including heavy arms), ammunition, and—in some cases—regular units of the Russian Army, there would be no “conflict in and around Ukraine.”

In short, the problem to fix is Moscow’s aggression in Ukraine—by restoring Ukraine’s sovereignty and territorial integrity, starting with the Donbas. More broadly, the problem is to persuade Moscow that it does not have the right to dictate the policies of its neighbors.

The authors are right that the Kremlin’s war against Ukraine requires a political solution. However, that solution requires an honest assessment of the battlefield, and the policies and objectives of the actors. Moscow has not hidden its objectives. Senior Russian officials declare that they must have a sphere of influence, and to achieve it they will use all necessary means, including military force.

Since the first post-Soviet days, Moscow exploited internal divisions in its so-called “near abroad” to project influence on governments in Chisinau, Baku, Tbilisi, and Yerevan via “frozen conflicts” in breakaway regions. When relatively discreet means did not work, Moscow used regular army troops, as in Georgia in 2008 and Ukraine in 2014, to prevent those countries from exercising full sovereignty and restoring their territory.

By and large, the West permitted Moscow to pursue this unfriendly-neighbor policy until its 2014 aggression in Ukraine. Then, to Moscow’s unpleasant surprise, the West began to push back: kicking Moscow out of the Group of Eight, imposing serious economic sanctions, and providing training and even arms to Ukraine. All of these steps, which Moscow has claimed raise international tensions, are in fact the preconditions to resolving the actual security problem threatening Ukraine and Europe. They need reinforcement to achieve a suitable solution.

The statement’s imprecise description of the problem leads to a potpourri of recommendations. Most of these are constructive and would serve as confidence-building measures while alleviating some of the misery this Russia-Ukraine conflict has inflicted on the people of the Donbas. That is likely why some signed this document. But other recommendations are troublesome and even echo Kremlin tactical proposals or propaganda themes.  They might create an environment in which it is easier for Western policymakers to weaken the penalties that have thus far helped thwart Kremlin ambitions in Ukraine. By themselves, the recommendations will not lead to a settlement in the Donbas or a secure Europe.

Let’s focus on the problematic recommendations.

Recommendation seven talks about exploring free trade zones among Ukraine, the European Union (EU), and Russia. It is not clear this will work. Ukraine wanted to sign both the Deep and Comprehensive Free Trade Agreement (DCFTA) with the EU and a free trade agreement with the Eurasian Economic Union (EEU). Moscow, however, insisted that Ukraine join the EEU customs union—something it could not do, because the EEU is a customs union precluding Ukraine’s participation in DCFTA. This recommendation could offer a useful step forward provided that Moscow is now prepared to develop a free trade agreement with Ukraine and the EU that would not require Kyiv to abandon its DCFTA with the EU.

Recommendation eight picks up the Kremlin-friendly idea of partial sanctions easing for partial implementation of the Minsk Agreement. It ignores the fact that the most critical element of Minsk is a real ceasefire, which could happen tomorrow if Moscow so instructed its officers and proxies in the Donbas. This recommendation, moreover, would undercut the European Union position that all of Minsk must be implemented in order for the sanctions to be lifted.

This recommendation ignores the fact that the penalties the Kremlin has suffered for its aggression in Ukraine have helped Kyiv fight Moscow to a draw.

Security for Ukraine and Europe as a whole would only be weakened by easing sanctions before the Kremlin’s occupation of the Donbas ends and Ukraine regains control over its border.

Recommendation eleven calls for “selective engagement” between the EU and Russia, “including through the implementation of the Minsk agreements.” There are some questions about where engagement makes sense given current tensions.  However, other steps that move toward restoring business as usual should be conditioned on specific implementation of the Minsk agreements. Such engagement should not seek to prematurely undercut EU sanctions.

Recommendation twelve, which calls for a “new national dialogue about identity,” is a dubious meddle in Ukraine’s internal affairs. This reflects Moscow’s meme about a divided Ukraine that led to the “civil war” in the Donbas.  The reality is that the historic divides in Ukraine have lessened dramatically in the thirty years of independence—especially in the six years since Russia seized Crimea. Russian speakers have been prominent among Ukrainian citizens fighting in the Donbas, and President Putin’s aggression has made him the father of a new national pride in Ukraine.

Recommendation twelve’s invitation to Russia to help define Ukraine is astonishing in its disrespect for the nation Russia has invaded. Poland has been Ukraine’s friend and Hungary has not, but Ukraine should not be asked to negotiate its identity with anyone. It can be asked to meet international and Organization for Security and Cooperation in Europe standards of human rights, to which it has already agreed, but not implicitly treated as an illegitimate country, which recommendation twelve implies. What Western interests does that serve?

That leaves us with recommendation ten, which calls for “a new dialogue among Euro-Atlantic states about building national security.” Of course, we already have major international agreements signed by Moscow and designed to ensure peace, security, and stability in Europe and beyond: the Helsinki Final Act (1975) and the Paris Charter (1990). These agreements, which guaranteed the sovereignty and territorial integrity of its signing states, have been serially violated by Moscow.

Starting such a dialogue could be a small bow toward Russia by the West. But Washington and other Western capitals should not forget that the Kremlin ideal is the Yalta Summit, the 75th anniversary of which just passed, where splendid ideals and vague commitments did not prevent Moscow from imposing its will on its East European neighbors for more than four decades. So long as Western participants in a new dialogue seek concrete commitments and establish clear red lines, backed by economic and military power, such an exercise might be helpful when the Kremlin finally decides to end its unsuccessful aggression in Ukraine. The dialogue should not encourage hawks in Moscow still trying to dominate Ukraine.

Ambassador Nicholas Burns, Former Under Secretary of State for Political Affairs, US Department of State

Ambassador Paula Dobriansky, Former Under Secretary of State, US Department of State

Eric Edelman, Counselor, Center for Strategic and Budgetary Assessments; Former Under Secretary of Defense, US Department of Defense

John C. Kornblum, Former Assistant Secretary of State for European Affairs, Former US Ambassador to Germany, US Department of State

Ambassador William B. Taylor, Former US Ambassador to Ukraine