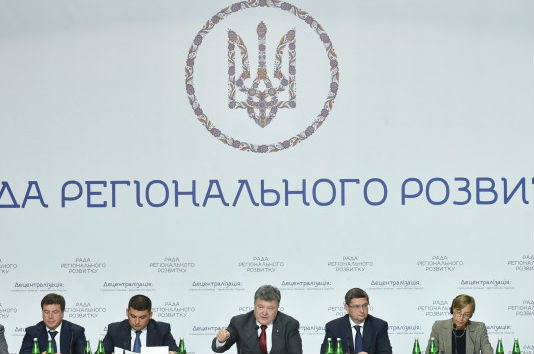 As the August 31 grenade attacks, rioting, and violent protests at Ukraine’s Parliament—the Verkhovna Rada—demonstrated quite literally, the Ukrainian decentralization effort is an explosive issue. Constitutional amendments granting local communities greater governing responsibilities have sparked widespread criticism, both in Ukraine and in the West.

Some warn that the new system will excessively empower the president at the expense of the Council of Ministers and the Rada. Others question how a country can change the distribution of powers without Luhansk and Donetsk, both still occupied by covert Russian forces. Other analysts worry about certain ambiguities in the legislation’s language, arguing that the proposed amendment does not adequately distinguish the roles of the central government, regions, and towns. Still, most Ukrainians support decentralization. They want to adopt European standards of governance, and adopting a Polish-style institutional system is as good a way to get there as any.

If that wish is to come true, Kyiv’s proposed constitutional amendments won’t be enough. As currently written, these amendments don’t provide sufficient institutional support for local communities—especially smaller rural towns and villages—that will bear an increased burden of governance.

In short, the decentralization plan changes Ukraine’s institutional foundation from that of a strong centralized unitary state to one based on the principle of subsidiarity. It places the responsibility of providing and maintaining day-to-day public goods and services on the shoulders of the hromadas—the villages, towns, and cities that make up Ukraine’s basic governing units. Today, the central government in Kyiv carries out most governance, but in a decentralized Ukraine, locally elected councils will direct local governing bodies on issues ranging from land use and utilities to healthcare and law enforcement. The President will be able to terminate the authority of any hromada council or board, and appoint his own commissioner until an election can be called.

The next levels of state power—the raion, or district, and then the oblast, or region—ostensibly carries the same powers and duties as before. However, they will answer to a prefect or “civil servant” (to quote Article 106 of the proposed amended constitution) appointed by the President to oversee government business, enforce federal legislation, and guard against constitutional violations. Between this power and the fact that the prefect answers not to the Cabinet of Ministers but directly to the President, some experts worry the new system unfairly adds an extra card to the President’s political hand.

However, no system is totally immune to abuse, especially one grounded in a political culture that has historically lacked strong formal institutions. Institutional design alone cannot morph a neo-patrimonial regime into one based on the rule of law. Only a precedent set by people willing to play by a new set of rules can do that. The proposed setup creates problems that could hamper the development of an effective state. Fortunately, legislation can fix them.

First, Ukraine’s 15,000-plus hromadas must be consolidated into larger communities of at least 20,000 inhabitants each. Many of these hromadas are villages with fewer than 500 people and lack the capacity to provide the goods and services that Ukraine’s new Constitution demands of them. Reformers should follow the advice of a 2014 report by the US Agency for International Development suggesting hromadas be grouped into 1,200 larger units.

Second, the Rada must enact legislation solidifying the mechanisms that finance hromadas. The current amendments only stipulate that they’ll be funded through a mix of federal allocations and local taxes. But the smallest, most rural hromadas—which have the least political influence in Kyiv— require legal protection to ensure that they’ll receive their fair share of funding, so that they can develop the governing infrastructure needed to carry out their new responsibilities.

Finally, local governing bodies and town councils will need education and training to do the job properly. Community leaders will have little experience in providing healthcare, managing a police force, or making decisions on optimal land use. They’ll have to learn on the fly as they meet the often urgent needs of their constituents. Training programs have the double benefit of helping local governing bodies adapt to the new changes while providing a level of oversight that can prevent corruption. Support from Poland would be especially useful, not only because the proposed decentralized system is based on the Polish one, but because many Ukrainians want their nation’s future to resemble Poland’s present.

As the Council of Europe’s Venice Commission opined in its most recent analysis, the new plan is “well drafted and deserve[s] support.” The Verkhovna Rada, after due discussion and further negotiation, should pass the bill to change the Constitution. However, the Constitution alone cannot save Ukraine. If further legislation fails, small towns and villages won’t be able to provide the goods and services that make institutions strong and popular. If that happens, citizens will be forced to turn to informal institutions, organized crime, and in certain areas Russia to meet their needs for survival. In order to fulfill the dream of a Ukraine based on rule of law as envisaged during the Euromaidan, the reformers must never forget the importance of good, local governance.

Joshua Solomon is an intern in the Atlantic Council’s Dinu Patriciu Eurasia Center.