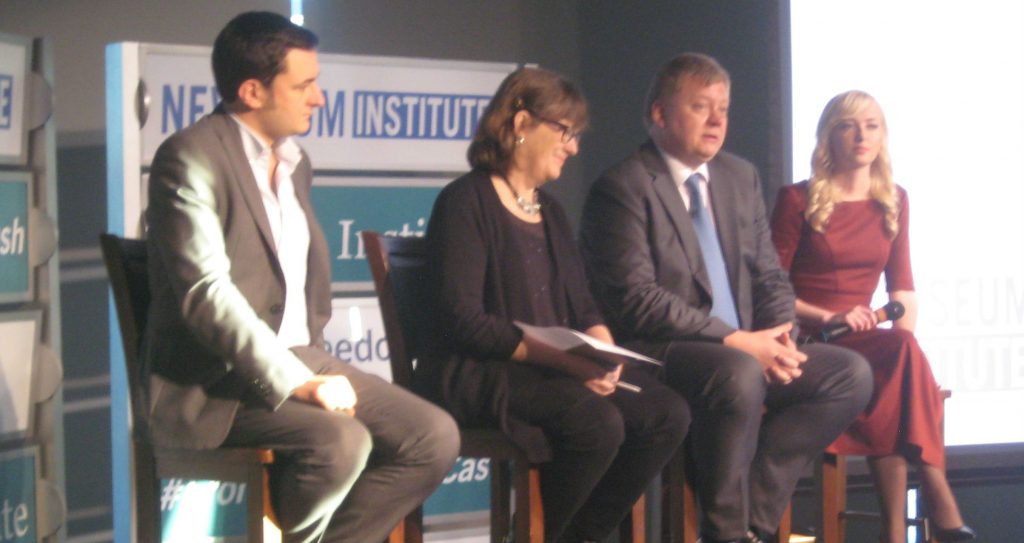 The numbers are staggering. Annually, $1 trillion is stolen by corrupt officials from countries around the globe. That money needs to be spent, or laundered, and much of it goes into big anonymous real estate deals in the United Kingdom, which is seeing £1 billion in unrecorded capital inflows per month. The main source of that money? Russia.

“From Russia with Cash,” a new documentary that aired at the Newseum on December 15, focuses squarely on the phenomenon. It examines up close British real estate agents’ willingness to overlook a deal’s potential illegality in the hopes of a big commission. Wearing hidden cameras, Russian government minister “Boris” and his blond girlfriend “Nastya” tour five palatial apartments in central London, accompanied each time by a different real estate agent.

The movie captures the interactions. We watch Boris buttonhole each realtor to confide that he is a government minister with a “very small salary,” adding, “Needless to say, the money for this flat comes straight out of the Russian budget.” He explains that his name cannot be connected to the property in any way.

Despite having just heard that their client is a crook, the agents invariably continue the deal. Several refer him to a lawyer; one says, “You shouldn’t be telling me anything about any of these things,” but doesn’t cut the conversation short.

In the United States, that behavior is fine: real estate agents in the United States aren’t obligated to report on clients whose legality is in question. But in the United Kingdom, an agent who thinks a potential client might be laundering money illegally is required by law to file a Suspicious Activity Report (SAR) with the country’s National Crime Agency.

In the movie, the agent showing the ritziest apartment— an ornate five-bedroom flat selling for £15.8 million (and potentially fetching a £315,000 commission for the agent)—does seem to have second thoughts after Boris’ speech; there’s a moment where it looks like he might turn the Russian down. But then he says, “No one will find your name on this,” and proceeds to explain how that can work.

None of the deals go far beyond the initial conversation, but the movie is a powerful, if repetitive, illustration of how corruption flourishes. Corrupt officials from around the world need safe places to park their money, and real estate deals are currently the vehicle of choice—as long as the bureaucrats’ and oligarchs’ names can’t be traced to the purchases.

London is the most popular spot for international investors, followed by New York and Miami; one of the real estate agents in the movie mentions that “80 percent or more of my transactions are international [buyers], and 50 or 60 percent of those are in various stages of anonymity.” Often, the owner will cloak his or her identity by using an offshore shell company.

These deals raise the price of homeownership for the cities’ local residents, but perhaps more important, they allow corruption to continue unchecked. Which is what makes British real estate agents, given their SAR requirement, so critical: they can stop illegal money from finding a safe harbor in London.

In a question-and-answer session following the showing, Roman Borisovich, who played Boris in the film and is a Russian anti-corruption campaigner, explained in more detail. “This is about the gatekeepers,” he said. “We can’t stop Russian elites from pillaging their own countries, but we can stop the money from coming in.”

Ben Judah, the movie’s creative consultant, compared today’s situation to that of London during the Victorian era, which was plagued by street crime. When the handling of stolen goods became strongly regulated, crime dropped. The West, he said, should consider luxury residences purchased with stolen funds as “blood mansions,” like the “blood diamonds” that fund wars in Africa—because the money can be equally destructive over the long term.

Natalie Sedletska, a Ukraine-based investigative journalist who played Nastya in the movie, agreed. Referring to money stolen by Ukraine’s former President Viktor Yanukovych, she said, “Not a dollar has been returned to the Ukrainian budget. There have been sanctions on Yanukovych, but our law enforcement agencies didn’t want to cooperate. And so much money that was laundered through the US banking system is not recoverable.” She added, “We see why our countries are still so poor.”

In an effort to change things, Borisovich, Judah, and Sedletska are part of a new anticorruption campaign that includes Transparency International and Global Witness; it aims to push governments outlaw anonymous property deals.

But the team has already made a difference. “From Russia with Cash” created a big splash in the United Kingdom; according to Borisovich, the movie’s conclusions made the front pages of British newspapers.

Amanda Abrams is a freelance writer in Washington, DC.