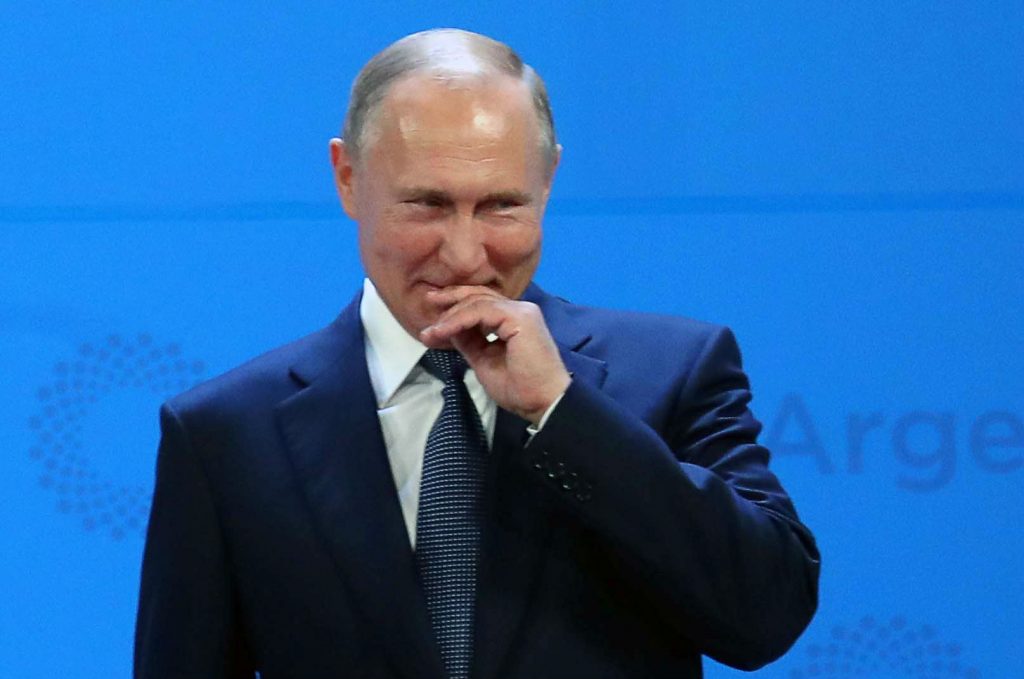 Vladimir Putin had a simple explanation for the wave of international condemnation that engulfed Moscow in the wake of Russia’s November 25 Black Sea attack on the Ukrainian Navy. According to the Kremlin leader, it was all Ukraine’s doing. “Kyiv is actively stirring up anti-Russian sentiment,” he lamented. “That’s all they have—and it works.”

This is far from the first time Moscow officials have sought to explain away serious accusations by attributing them to conveniently vague notions of anti-Russian bias. Indeed, the formerly moribund nineteenth century concept of Russophobia has enjoyed a remarkable renaissance since 2014, becoming the Kremlin’s excuse of choice whenever faced by a new round of allegations. Whether the crime in question is the invasion of Ukraine, an attempted coup in the Balkans, chemical weapons attacks in rural England, or electoral interference across Europe and the United States, the Kremlin has clearly decided the best form of defense is to ignore the charges completely and condemn the international community for surrendering to anti-Russian hysteria.
Moscow’s motivation is not difficult to grasp. The habit of labeling any criticism as Russophobia has become indispensable to the Kremlin in recent years as it clings to the increasingly implausible deniability at the heart of Russia’s hybrid war against the West. Russophobia is the only way to make sense of a world in which Russia continues to protest its innocence while facing virtually daily accusations of fresh offenses. If Moscow were genuinely not guilty of the myriad transgressions attributed to it, then an irrational phobia would indeed be the only rational explanation for these diverse and seemingly unrelated claims.

This makes the Kremlin’s enthusiasm for playing the Russophobia card perfectly understandable. However, it leaves the key question unanswered. Why would the outside world suddenly become so anti-Russian? Moscow would have us believe that incidents of Russophobia have skyrocketed since 2014, but there has been no accompanying attempt to explain what could lie behind this bizarre phenomenon. Kremlin officials appear to regard Western hostility toward Russia as being both preordained and self-evident, thus rendering any further explanation redundant. Such thinking betrays Moscow’s own instinctively adversarial approach to international relations, while also hinting at the obsessive rivalry that continues to dictate the politics of a nation still stewing in its Cold War defeat. In reality, Russia’s obsession with the West is by no means mutual and has not been for some time.

Regardless of Kremlin claims to the contrary, Russophobia was the last thing on anyone’s minds prior to 2014. Most international observers quickly lost interest in Moscow after 1991 and remained only dimly aware of Russia’s lingering resentment toward the collapse of the Soviet Union. By the time Putin began moving toward open revanchism, Kremlinologists had become museum exhibits and a new generation had grown used to thinking of Russia as a troubled but relatively inconsequential country seeking to modernize and rejoin the community of nations. As a result, many still cannot fathom what the Kremlin could possibly hope to gain from disrupting the post-Cold War settlement.

This widespread failure to grasp the sense of historical injustice driving modern Russia has also prevented many from taking Putin’s brand of defiant imperial nostalgia seriously. The return of the Soviet national anthem at the start of his reign barely warranted a mention, while the rehabilitation of Stalin failed to set alarm bells ringing. Western cluelessness was nowhere more apparent than in the unseemly haste to overlook Russia’s attacks on Estonia and Georgia in the late 2000s.

Even after the 2014 invasion of Ukraine, many have remained reluctant to recognize Russia as a hostile power and have only responded to the renewed threat from Moscow with considerable restraint and deep regret. The various countermeasures the Kremlin now denounces as Russophobic are in fact self-inflicted wounds that Russia has brought on itself through a pattern of aggressive conduct that has become impossible to ignore. If the West is collectively guilty of anything in its dealings with Putin’s Russia, it is wishful thinking rather than Russophobia.

While the West was largely indifferent to post-Soviet Russia, Ukraine was its closest natural ally. It is in Ukraine that the Kremlin’s role as architect of anti-Russian sentiment is most apparent. As the conflict in eastern Ukraine grinds on for a fifth year with no end in sight, it is tempting to assume the two countries have always been sworn enemies. However, there was nothing inevitable about the deterioration in bilateral ties that brought Russia and Ukraine to their current state. On the contrary, they emerged from the Soviet wreckage joined at the hip and remained so deeply entwined that independent Ukraine’s second president Leonid Kuchma eventually felt moved to publish a book entitled “Ukraine is not Russia.” Moscow chose not to take the hint. Instead, the Kremlin pushed on with heavy-handed attempts to make sure Ukraine remained an imperial possession in all but name. This led directly to the 2004 Orange Revolution and the 2014 Euromaidan Revolution, both of which focused on a desire to escape the Russian orbit and move Ukraine toward a more recognizably European model of democratic government. Rather than backing off or attempting a charm offensive, Putin sent in the troops.

Kremlin leaders like to blame the subsequent collapse of Russian influence in Ukraine on Russophobia, but this ignores the fact that most Ukrainians grew up regarding Russians more as siblings than neighbors and were duly flabbergasted in 2014 when Moscow attacked. Even now, with Crimea under occupation and Russian tanks in Donetsk and Luhansk, many millions of Ukrainians continue to express broadly positive views of Russia itself while reserving their ire exclusively for the Kremlin. This anger is the bitter fruit of Putin’s war and not the ravings of irrational Russophobes.

Ukraine is only one of many to reach the same negative conclusions. Russia’s hybrid hostilities have earned the country a reputation as one of the greatest threats to global security, while the accompanying claims of Russophobia merely serve to hamper meaningful dialogue and deepen the distrust that is poisoning the international environment. In an ideal world, the Kremlin would acknowledge its role in the current descent toward a new Cold War and seek a fundamental reset in relations. Despite its chronic bad behavior, a repentant Russia would find that the door to a thaw is wide open. As the underwhelming international response to Russia’s recent Black Sea naval attack demonstrates, there is still very little appetite for confrontation on the part of the West. Nevertheless, continued acts of Kremlin aggression will force the international community to take further measures despite the widespread preference for a return to business as usual. If Russia’s leaders insist on defining this as Russophobia, so be it—but they must also realize that the condition has now reached epidemic proportions across the world. It has become Russia’s leading export, and this will remain the case for as long as Putin’s hybrid war continues.