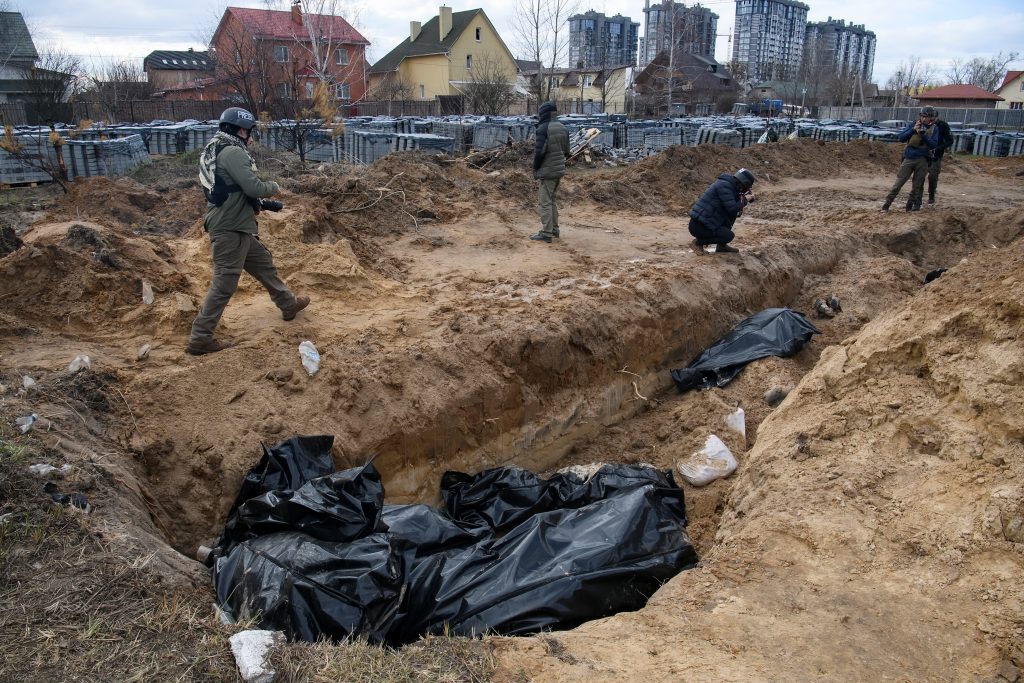 Since Vladimir Putin launched his invasion of Ukraine six weeks ago, many of the illusions at the heart of the post-Cold War world order have come crashing down. The rights we all regarded as inalienable are in fact only available to those with the necessary security guarantees. For everyone else, fear trumps freedom and shared values have virtually no value at all.

Nobody is more acutely aware of this than the people of Ukraine. Despite months of warnings about an imminent full-scale Russian attack, people simply refused to believe such things could still happen in the year 2022. Right up until 5am on the fateful morning of February 24, the idea of a major European war seemed too fanciful to entertain.

Of course, the whole world knows what happened next.

More than one month later, the lack of a decisive international response is proof that Putin was correct in counting on the weakness of the democratic world. While Russian troops butcher civilians in Bucha and dozens of other Ukrainian towns and cities, German politicians continue to debate possible future reductions in Russian gas purchases, while France cautions against provoking Putin. European countries remain deeply reluctant to arm Ukraine but have no such reservations about sending Moscow billions of dollars each week to help finance the war.

Standard-bearers of the international order at institutions like NATO, the European Union, and the UN continue to defend the idea of a rules-based world with solemn speeches and frequent expressions of concern. However, it remains to be seen whether the rules they champion still have any real meaning. Have these lingering notions of a rules-based order really prevented Russia from expanding its attack to Poland, Lithuania and Latvia, or are these countries simply not yet part of Moscow’s tactical plans?

Instead of punishing Putin for his outrageous crimes, the watching world allows him to act with comparative impunity. Western leaders hand him the initiative and wait to see what he will do next. Their threats of future penalties ring more and more hollow with each new atrocity.

Such behavior does not signal strength. This is particularly reckless given that strength is the only language Putin understands. Whenever the West shows weakness to Russia, this is interpreted in Moscow as an open invitation to go further.

It is already increasingly obvious where all this is leading. For years, Putin has stated openly that he does not recognize Ukraine’s right to exist. He has labelled Ukraine an artificial creation of the Bolsheviks and declared all Ukrainians to be Russians. The modern Ukrainian state, he says, is an illegitimate “anti-Russia” run by “neo-Nazis” and their Western curators. This is the language of genocide and it is now being matched by the actions of his military in Ukraine.

Time is running out. We know Russian troops have already begun mass executions of the Ukrainian civilian population. The recent revelations of Russian war crimes in the once sleepy suburbs around Kyiv have sparked a wave of revulsion and outrage around the world, but we are yet to see a suitably strong reaction. Instead, we hear more talk of tougher sanctions and attempts to defend conventional red lines that Putin has long since disregarded. Mass murderers are not afraid of financial penalties.

Putin will not stop his war of annihilation in Ukraine until the world stops him. The atrocities committed during the first month of the war leave little room for doubt over his intentions. At the same time, the continued hesitancy of the Western world creates the impression that he will ultimately be allowed to advance his criminal agenda.

The international community is apparently so afraid of what Putin may do next that they are no longer capable of recognizing the enormity of what he has already done and is doing at this very moment. Their only objective appears to be avoiding anything that might provoke a further escalation. When dealing with a bully like Putin, this is the worst possible approach to adopt.

If Western leaders wish to defend the rules-based order that has served them all so well, they must urgently do so in Ukraine. This means providing the Ukrainian military with the offensive weapons it requires to defeat Russia on the battlefield. Nothing short of a decisive defeat will be sufficient to avert catastrophe. The time for appeals to rules and regulations has now passed. Such niceties belong to a different world that is long gone. Sacrificing Ukraine’s future will not bring it back.

Mykhailo Tkach is a journalist at Ukrainska Pravda.