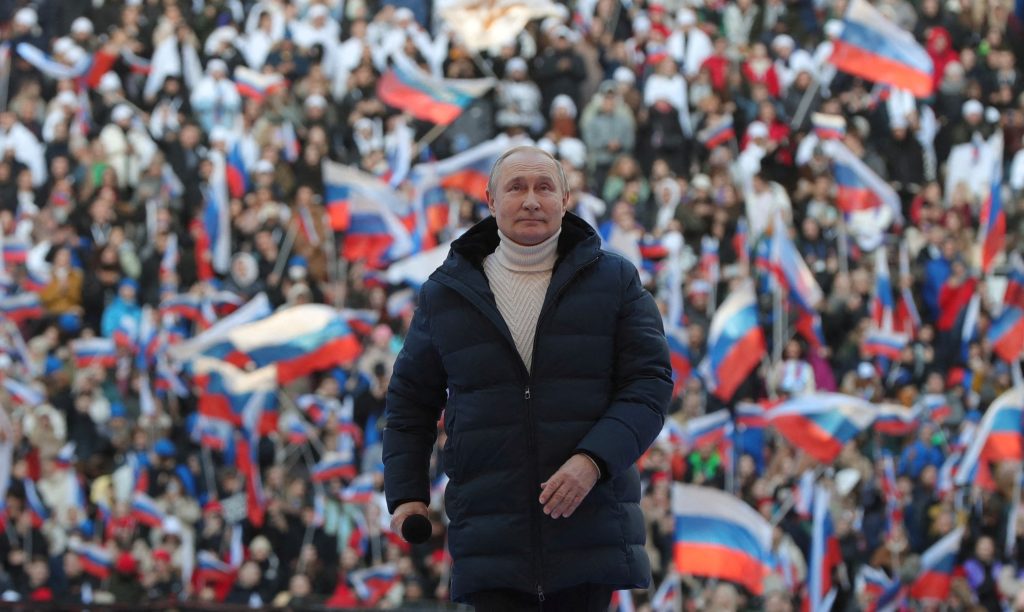 As the largest conflict in Europe since World War II enters its second month, surprising numbers of Western politicians and commentators continue to question why Ukraine does not simply accept Moscow’s demands. They fail to appreciate that there can be no meaningful negotiated settlement with a regime that openly denies Ukraine’s right to exist while actively seeking to destroy Ukrainian statehood and identity.

These calls for compromise with the Kremlin are symptomatic of a far broader perception problem. Many Europeans are still reluctant to acknowledge Russia’s descent into full-blown fascism under Vladimir Putin, despite similarities with Nazi Germany that are now too obvious to ignore. Indeed, German society in particular is uniquely well-equipped to recognize the ominous trajectory of Putin’s Russia, but seems trapped in denial.

The great irony of the current war is Russia’s attempt to frame the conflict as a campaign to “denazify” Ukraine. This portrayal is very much in line with the Kremlin’s long tradition of labelling any manifestations of Ukrainian national identity as “fascism.” It is also an attempt to tarnish Ukraine’s reputation on the global stage by associating the country with history’s most notorious criminals.

Unfortunately for Russia, international audiences are no longer completely ignorant about Ukraine and increasingly understand that Moscow’s “Nazi” slurs are baseless. As international coverage of the current war has frequently highlighted, it is both absurd and grotesque to label a democratic country with a popularly elected Jewish president as “Nazi.”

Likewise, the pitiful electoral performance of Ukraine’s far-right parties has often been cited as evidence of the emptiness of Russia’s claims. Whereas far-right political parties have enjoyed considerable success across the European Union over the past decade, Ukraine’s marginalized nationalist fringe consistently struggles to secure more than 2% of the vote. In practical terms, Moscow’s definition of a Nazi is politically meaningless and includes any Ukrainian who rejects the idea that their country belongs to Russia.

In contrast to democratic Ukraine, Russia itself is now in many senses the epitome of neo-fascism. Vladimir Putin has constructed a strikingly fascistic culture of extreme nationalism and expansionist militarism fueled by a carefully cultivated sense of historical injustice together with nostalgic appeals to a highly idealized and largely imaginary past. This is almost a textbook definition of fascism.

As the supreme leader of his one-party state, Putin has focused much of his ideological attention on demonizing and dehumanizing Ukraine. In a series of rants designed to justify the February 24 attack on Ukraine, he denounced the entire country as an illegitimate “anti-Russia” and declared his intention to embark on what the Kremlin media trumpeted as the “final solution” of the Ukrainian question.

The ensuing Russian invasion of Ukraine is rapidly taking on the form of a Nazi-style war of extermination, with the systematic destruction of civilian populations and reports emerging from occupied regions of mass arrests, kill lists and forced deportations. It is hardly surprising that so many people now regard the “Z” branding of Putin’s invasion force as a modern-day version of Hitler’s swastika.

While peace talks have been underway since the early days of the war, Russia has so far shown little sign of a readiness to compromise. Instead, Moscow demands Ukraine’s demilitarization along with the above-mentioned “denazification,” which in practice would mean leaving the country defenseless and stripping it of its Ukrainian identity. Russia also seeks Ukrainian recognition for the annexation of Crimea and the so-called separatist republics of eastern Ukraine.

Even if Ukraine were to accept these dangerous proposals, the experience of the past eight years indicates that Russia would use any ceasefire to regroup and prepare for the next round of hostilities. Moscow would also seek to exploit a temporary settlement in order to secure sanctions relief and gain the economic strength to further strengthen its military.

This is why Ukraine’s Euro-Atlantic choice cannot be on the table during negotiations. Russian demands for Ukrainian neutrality are aimed at guaranteeing Ukraine’s submissiveness. Once Ukraine bows to Russian pressure and rejects Euro-Atlantic integration, it will find its sovereignty permanently limited.

Ukrainians are well aware of what awaits them if they accept the partial occupation of their country by the Kremlin. Since 2014, Crimea and Russian-occupied eastern Ukraine have become human rights black holes complete with abductions, torture chambers, and secret detention centers. As Russia expands its grip on southern and eastern Ukraine, elected officials, journalists and activists are now being rounded up in occupied cities including Berdyansk, Nova Kakhovka and Melitopol. In the event of a compromise settlement, millions more Ukrainians would be exposed to these horrors.

It is also a mistake to assume the current conflict is exclusively “Putin’s war.” In fact, all the available evidence indicates that a strong majority of Russians support the invasion, while protests against the war in Russian cities have been relatively small and ineffective. In Ukraine itself, large numbers of Russian soldiers already stand accused of committing war crimes. Putin did not personally bomb residential districts in Mariupol or open fire on Ukrainian civilians seeking to flee the front lines of the conflict.

Western efforts to avoid a confrontation with Putin’s Russia are futile. The geopolitical reckoning they fear so much is already underway, whether Europe’s political leaders like it or not.

While Ukrainians are dying in their thousands and fleeing in their millions, the price paid by the rest of Europe have so far been limited to rising food and heating costs. However, this phony war is unlikely to last. If Putin is not stopped in Ukraine, the chilling logic of his revisionist ideology will lead to further acts of aggression against Ukraine’s European neighbors.

The only practical response is to provide Ukraine with the weapons needed to defeat Russia on the battlefield. During the first month of the war, the Ukrainian army has already demonstrated that it is capable of inflicting catastrophic losses on Putin’s invasion force. There are growing indications that Russian troops are demoralized and have little stomach for the fight. Now is the time to equip Ukraine with advanced air and missile defense systems along with drones, jets, anti-tank and anti-ship weapons.

Granting Ukraine EU candidate status and proposing a fast track towards membership would also be timely and meaningful. Not only would this signal that Ukraine will never be part of Putin’s imagined Russian Empire; it would also be a clear indication that the West stands firmly with Ukraine and has faith in the country’s future. After all, as the New Europe Center has argued, who would offer EU membership to a country that will soon cease to exist?

Calls for Ukraine to reach a compromise with Putin’s regime are as short-sighted and inappropriate as advocating negotiations with Nazi Germany at the height of WWII. The only outcome that should satisfy the West is the complete defeat of Russia.

If Ukraine stops fighting in exchange for the illusion of a temporary truce, the consequences for both Ukraine and the wider world will be grave and the costs of stopping Putin will rise even further. Instead, the goal of the international community must be the denazification of Russia.

Kateryna Zarembo is an associate fellow at the New Europe Center and a lecturer at the National University of Kyiv-Mohyla Academy. A German-language version of this essay was earlier published by Ukraine-Analysen.

Naftogaz CEO Yuriy Vitrenko has accused European countries of funding Vladimir Putin’s invasion of Ukraine and called for an immediate embargo on all Russian energy exports in order to stop the war.