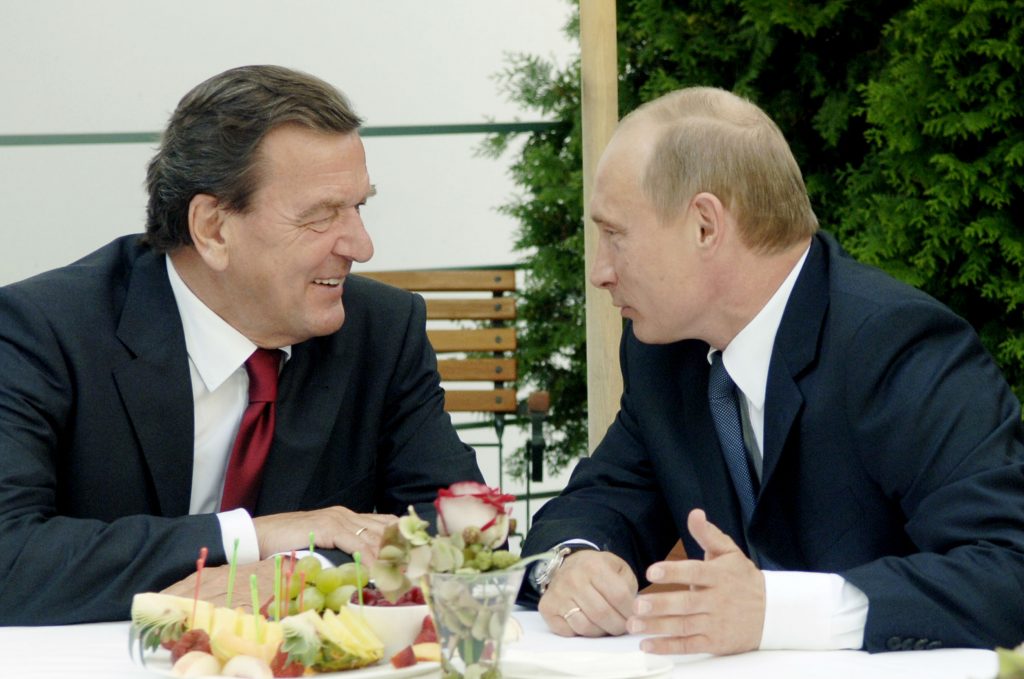 Russia's President Putin and then German Chancellor Schroeder speak during their meeting in the chancellery in Berlin September 8, 2005. REUTERS/Bundesregierung/Guido Bergmann

On June 15, Ukraine’s Minister of Defense Stepan Poltorak informed NATO that Ukraine had suffered 623 battle deaths in its war with Russia in 2016.

This astoundingly large figure—which amounts to three to four deaths per day—demonstrates conclusively that Russia and its proxies have no intention whatsoever of adhering to the Minsk accords.

Meanwhile, Germany’s Socialists appear increasingly committed to doing everything possible to appease Russian imperialism. The roots of their indifference to international norms and human rights may go back to the days of Ostpolitik. They certainly go back to 2005, when then Chancellor Gerhard Schröder—who called Putin a “flawless democrat” at the height of Ukraine’s Orange Revolution in 2004—left his job in Berlin to become a highly-paid functionary of Russia’s deeply corrupt, state-owned energy company, Gazprom. Since his move came immediately after his chancellorship ended, Schröder must have negotiated the terms of his new job while still in office. Unsurprisingly, Schröder has consistently turned a blind eye to Putin’s fascism and imperialism while defending Russia’s energy interests and supporting the continuation of Europe’s energy dependence on Russian gas.

It’s also a repudiation of the European Union’s vaunted “European values.” The EU, minus its values, is just a bunch of inward-focused countries who share a few buildings and procedures and a currency. It’s the values—the commitment to democracy and human rights and the rejection of imperialism and colonialism—that make the EU special and worth preserving. In effect, German Socialist support of Putin is a rejection of Europe. That’s far worse than Brexit, as the British are rejecting the EU’s procedures, not its values. If the EU ever collapses, blame Germany’s pious-sounding Socialists above all.

Pro-Putinite tendencies are also evident in Germany’s authoritative, left-leaning newspaper, Die Zeit. In a recent article, its editor-at-large, Theo Sommer, discusses a variety of mass killings in the recent past—from Hiroshima, Nagasaki, and My Lai, to the Holocaust and Armenian genocide, the Battle of Verdun and the wars in Yugoslavia. Stalin’s mass murders of Ukrainians, Russians, Crimean Tatars, and everybody else aren’t on Sommer’s list. He’s too smart not to know, so the omission is obviously one of design. So much for Die Zeit’s courageous stand for human rights. What’s the moral of Sommer’s blindness for Germany’s young people? If a genocide is inconvenient to your agenda, ignore it.

But Gernot Erler, Berlin’s Russia man and, of course, a Socialist, takes the cake. “Our highest priority is to maintain consensus within the EU,” Erler recently said in reference to the possible easing of EU sanctions against Russia. “If a price has to be paid, then we should be ready” to pay it.

Alexander J. Motyl is a professor of political science at Rutgers University-Newark, specializing in Ukraine, Russia, and the former USSR.