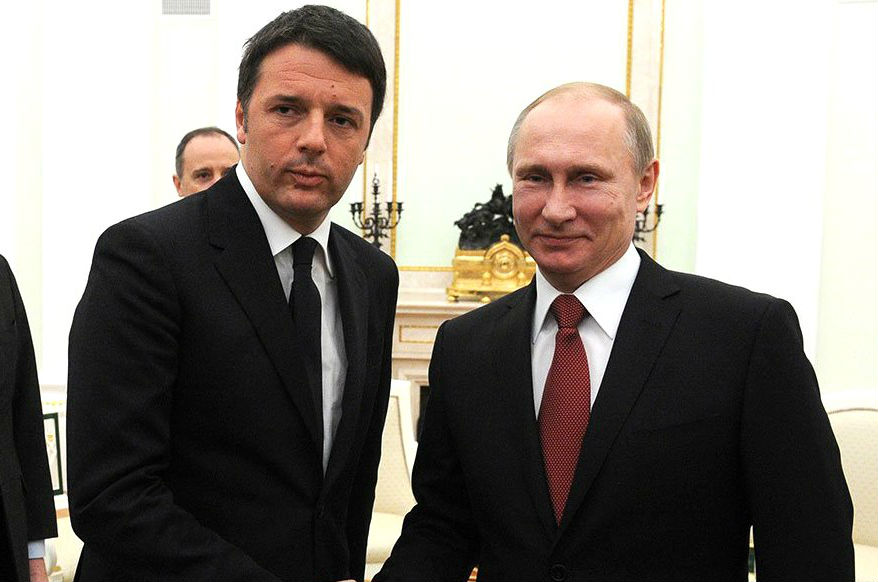 The EU is poised for another discussion on sanctions against Russia when they expire in July. As usual, there are some countries that are wavering for one reason or another. On April 28, French conservative MP Thierry Mariani secured a majority for a non-binding resolution in the French parliament recommending that the EU’s trade limits and other restrictions on Russia be lifted. Only 101 of the 577 French National Assembly’s deputies voted, with only fifty-five voting in favor of Mariani’s text. This illustrates, though, that support for the appeasement camp exists outside of France’s National Front.

Italy may be another problem. In a brilliant piece in Eurasia Daily Monitor, Emanuele Scimia singles out Italy as the main campaigner against the sanctions. The case Rome is making is that Russian counter-penalties on food imports have damaged the Italian economy. Italy is indeed Russia’s second-largest European trade partner after Germany, and has over 400 companies operating on Russian territory. According to the Italian small business association CGIA, Italian exporters have lost $4 billion in earnings between 2013 and 2015, a decline of 34 percent.

But Rome is directed more by political considerations than economic ones. The sharpest decline in Italy’s exports to Russia was experienced by the manufacturing sector, which is not impacted by the Russian counter-measures at all. The drop in trade is instead a consequence of Russia’s economic crisis and the fall of the ruble, which is caused not by Western sanctions but by the country’s over-dependence on oil and gas at a time when prices are falling. In fact, Russia has seen a decrease in trade even with countries that have nothing to do with the sanctions, such as China. In 2015, Sino-Russian trade fell by almost 28 percent.

Such facts do not stop powerful interest groups in Italy. Prime Minister Matteo Renzi will meet Russian President Vladimir Putin and attend the St. Petersburg International Economic Forum in June. “Rome aims to exploit its privileged and proven ties with the Kremlin to regain some sort of centrality within EU institutions,” Scimia writes. These short-term plans are not only selfish but also completely pointless: they are doomed to fail.

Russia has proved time and time again that its word means nothing. The Kremlin has broken numerous treaties it has signed since 1991, including the Budapest Memorandum guaranteeing the sovereignty of Ukraine. It has also flagrantly violated its promises in the Minsk II agreement. If Renzi thinks he is going to pull off some kind of “Nixon in China” breakthrough this summer, he is deluding himself. Putin will thank him for getting rid of the problem and then promptly dump him as he has done with everybody else to whom he has made promises.

Italy has of course found an ally in this endeavor in Hungary, Putin’s only friend in the EU. Other supporters of ending sanctions are countries like Cyprus, previously a center for Russian money laundering; Greece, whose left-wing government often echoes Russian propaganda on Ukraine; Austria, also a place with strong Russian commercial ties; and the Czech Republic, where some members of the political elite have connections to Kremlin-backed oligarchs. Then there is the ever-present German business community, which has opposed sanctions from the start and now may find Chancellor Angela Merkel easier to persuade because of her weakened position in the wake of the Syrian refugee crisis.

What all of these actors fail to grasp is that the Russian invasion of Ukraine is an attack on Europe, part of Russia’s attempt to topple the post-Cold War world order. If Moscow gets its way in Ukraine, it will only embolden Putin’s aggressive behavior, not change it. And if Eastern Europe is allowed to become a Russian interest sphere, this will affect Italy as well.

Yes, standing up to Russia may cost some money, but Europe is in no way dependent on commercial ties with Moscow. The EU looks to Russia for only 10 percent of its trade. It is also far less dependent on importing Russian gas than Russia is on exporting it. Putin has a weak hand, but he is playing a high-risk game against low-risk players. Russia worries about long-term endurance, not short-term cost.

Commentator Pavel Baev writes that when Russia’s May 9 celebration of victory over Nazi Germany ended, it left behind “the inevitable hangover and the ‘Now what?’ question.” Last year, the answer to that question was intervention in Syria. This year, it may be Ukraine again. During their own May 9 parade this year, separatists in Donetsk and Luhansk displayed heavy military equipment that is banned under the Minsk II agreement, including tanks, howitzers, and grad rocket systems. This is certainly not the time for the EU to falter on its commitments.