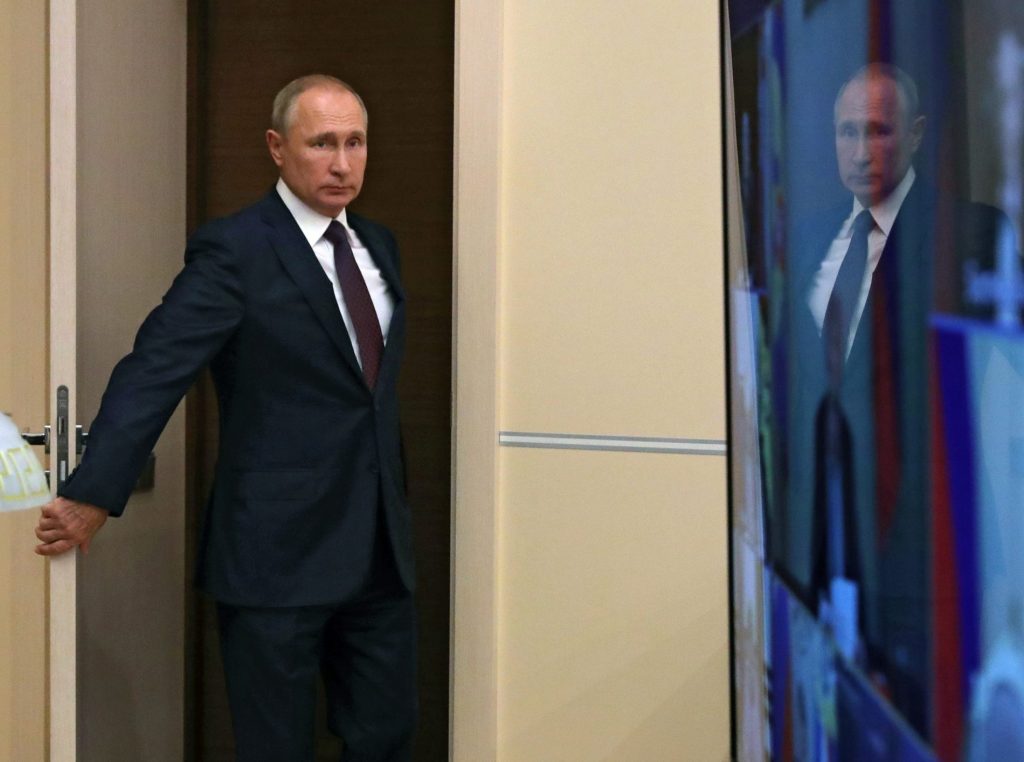 The poisoning of Russian opposition leader Alexei Navalny appears to have finally turned most Europeans against Vladimir Putin and his pet project, the Russia-German Nord Stream 2 pipeline.

As a comatose Navalny receives medical treatment in Germany, mounting numbers of European politicians are now calling for additional sanctions against the Kremlin. For the first time, this includes a growing chorus of German political and media leaders who are demanding the cancellation of Putin’s USD 9.5 billion energy project.

These calls to take action in response to the Navalny poisoning come at a time when there is also growing European unease over Russia’s escalating intervention in neighboring Belarus. So far, Putin has provided diplomatic and economic support to fellow dictator Alyaksandr Lukashenka. He has also sent Kremlin media specialists to take over Belarusian state TV and promised to deploy security forces if necessary to prop up the regime. In return, Putin is pressing the discredited and isolated Lukashenka to commit to deeper integration with Russia.

As outrage over the Navalny poisoning and concerns over Belarus continue to mount, at stake is one of the most strategically significant energy projects in the world today. The Nord Stream 2 pipeline is an all-water route linking Vyborg in Russia to Lubmin in northern Germany. It will bypass Ukrainian and Belarusian pipeline networks, together with Poland, the Baltic states, and other Central European nations. If completed, the pipeline would transform Germany into the main hub and principle EU distributor of Russian gas for Gazprom, Russia’s giant gas corporation. Both the European Parliament and United States government have fiercely opposed the project for a number of years on security grounds.

The German government has previously defended the pipeline as a purely commercial project. Berlin has brushed off the objections of the European Parliament, while at the same time objecting loudly to what some Germans have branded as unwelcome US interference in European affairs. However, many security experts dismiss German attempts to portray the pipeline as commercial and argue that it is primarily geopolitical rather than economic in nature.

Critics believe the Nord Stream 2 project is central to Putin’s two-pronged strategy towards Europe. It aims to make Europeans more reliant on Russian natural gas, while also bypassing existing pipelines in Ukraine and Belarus. This will make these two former Soviet republics less strategically important, leaving them vulnerable to Russian pressure and paving the way for their possible future occupation.

After years of diplomatic deadlock over Nord Stream 2, the revelations about Navalny’s poisoning appear to have caused a major shift in German attitudes towards cooperation with the Kremlin. In recent days, leading figures from many German political parties, including Merkel’s, have demanded that the pipeline be permanently canceled.

“I hope that the Russians will not force us to change our position on Nord Stream 2,” German Foreign Minster Heiko Maas said on September 6. Maas warned that if a satisfactory response was not received from Moscow within the next few days, Berlin would begin exploring targeted sanctions.

Others have been more explicit. “The EU should jointly decide to stop Nord Stream,” tweeted Norbert Roettgen, Head of the Bundestag’s Foreign Affairs Committee and a candidate to head Angela Merkel’s Christian Democratic Party. “The only language that Putin understands is the language of natural gas.”

Meanwhile, SPD spokesman Nils Schmid commented, “We need to make it clear that all talk of a strategic partnership with Russia is now over.” The leader of the liberal FDP party, Christian Lindner, added, “A regime that organizes murders by poisoning is no partner for big cooperative projects, and that includes pipeline projects.” Green Party leader Katrin Goring-Eckardt declared, “Nord Stream 2 is no longer something we, together with Russia, can press ahead with.”

Nor is this sudden concern over the morality of doing business with Putin’s Russia confined to Berlin. On August 28, even before conclusive evidence came to light that Navalny had been poisoned, French President Emmanuel Macron waded into the pipeline issue. “I don’t think the approach that we ought to have with Russia should be one of naivety, nor do I think it should be nourished by an increase in our dependence on Russia. This has always fueled my reservations about the Nord Stream 2 project. The chancellor knows it,” he said.

On September 3, Merkel said publicly that tests showed “unequivocally” that Navalny had been poisoned by a nerve agent and called on the Russian government to provide answers. The substance identified was similar to that used in the March 2018 attempted murder of former Russian spy Sergei Skripal and his daughter on British soil, which prompted a concerted expulsion of 150 Russian diplomats.

The German Chancellor said she plans to consult with European Union and NATO allies to formulate a response in the coming days. Last week, NATO Secretary General Jens Stoltenberg told reporters there was “proof beyond doubt” that Navalny was poisoned. The use of chemical weapons is a breach of international norms and rules. Stoltenberg stated that Russia must provide answers and cooperate with an impartial international investigation.

Predictably, Kremlin spokesman Dmitry Peskov responded to the mounting demands for explanations by saying there was “no basis” to accuse the Russian state in the case, adding that Moscow was still waiting for an explanation from Berlin on its conclusion that Navalny had been poisoned. He said there was no reason for new sanctions and dismissed calls to stop Nord Stream 2 as “emotional statements not based on concrete facts.”

As calls to do something about the Navalny poisoning grow, it is worth underlining that only Germany and Russia have consistently supported the pipeline, making it an obvious target for any sanctions. The European Parliament previously voted overwhelmingly to block the project, but Gazprom ignored this and continued construction.

In the final days of 2019, the United States imposed tough sanctions that halted work on the pipeline, but US officials have since had to announce a new round of sanctions following attempts by Russia to pull off a work-around solution that would allow Moscow to complete construction despite American attempts to obstruct the project.

The fate of the pipeline had appeared to hinge on Russia’s ability to bypass US sanctions. However, the Navalny poisoning has now dramatically altered this equation. Even Bild, Germany’s hugely influential tabloid newspaper, has bluntly called on Chancellor Merkel to “stop Putin’s pipeline.”

Whatever happens, the Americans will remain committed to preventing Nord Stream 2 from entering service. As sanctions co-sponsor Senator Ted Cruz said in July 2020, “There is a unified bipartisan, bicameral, inter-branch consensus across the whole of the United States government to ensure Putin’s pipeline never comes online.” This will remain the case, even if the current wave of outrage in Europe fails to sink the project.