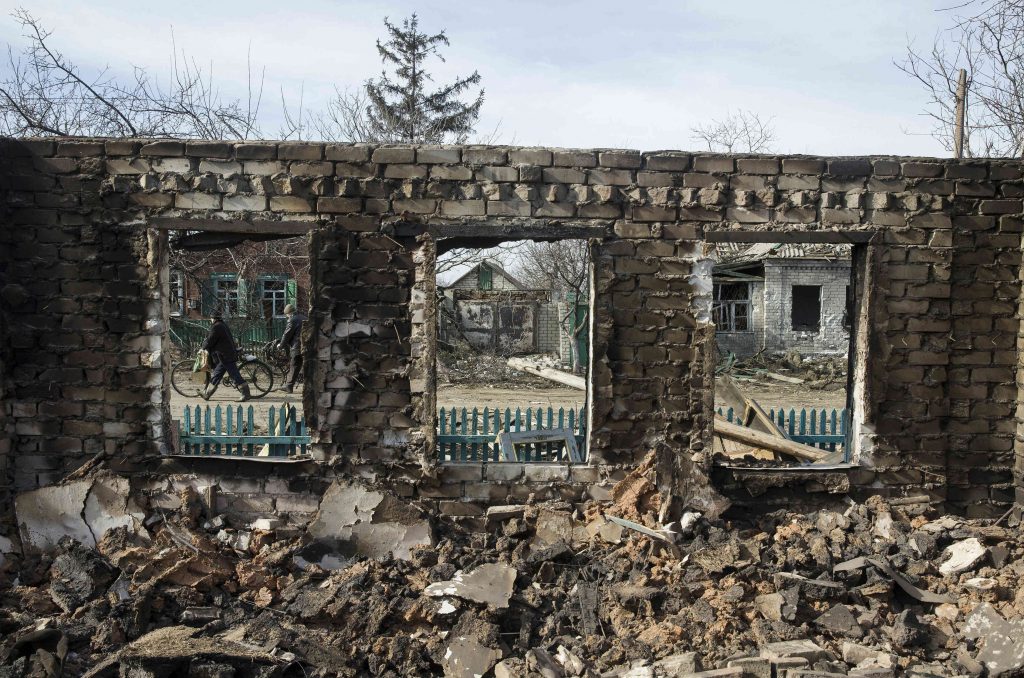 The war in eastern Ukraine is a Kremlin-manufactured conflict. The arrival of “little green men” in Crimea in February 2014 transformed the conflict from a domestic altercation between citizens and their government to an international crisis. Russian President Vladimir Putin publicly acknowledged in a government-sponsored documentary that he carefully planned and orchestrated the military takeover of the Crimean peninsula. No such admissions have been made about the war in the Donbas. From the outbreak of fighting in the east, the official Kremlin narrative has framed the Ukrainian crisis as a civil war between the Ukrainian government and pro-Russian separatists. In reality, for the first six months of the conflict, from March to August 2014, the Ukrainian civil war was a myth concocted by Russian state-sponsored media, reiterated by Russian officials, and then picked up by Western media outlets eager for objectivity and balance. But with the continued influx of Russian weapons, soldiers, and Russian recruitment and training of local Ukrainian forces, that myth is swiftly becoming a reality.

At the outset, Ukrainians were a minority in the forces fighting for regional separatism in the east. In the spring of 2014, civilian protesters and little green men from Russia attempted takeovers of government buildings in the Donbas, Kharkiv, and Odessa. At times, the efforts were farcical; in Kharkiv in April 2014, “local” separatists took over a theater which they had mistaken for city hall. The homegrown Ukrainian separatists were never alone—Moscow backed them with arms, mercenaries, heavy equipment, and leaders, playing a leading role in igniting and escalating the conflict from the start. But even supplied with Russian-made arms, these separatist groups were lousy soldiers. Accounts on the ground showed them to be disorganized, undisciplined, and without strategic leadership.

By the summer, as Ukrainian government forces regained ground in Donetsk, the Russian military deployed massive supplies in mysterious aid convoys across the border to reverse Ukraine’s gains. By August, the Russian military was operating in full force to recapture the strategic city of Ilovaisk. With hundreds of Ukrainian soldiers killed and many more wounded, the loss of Ilovaisk represented a crushing defeat. Shortly after the battle of Iloviask, the first ceasefire agreement was signed on September 5.

Taking advantage of the lull in fighting after the first ceasefire agreement came into place, the Russian military built up supplies and increased personnel in the Luhansk People’s Republic and the Donetsk People’s Republic. By January 2015, the ceasefire was in shambles as heavy fighting resumed around the Donetsk airport. Ukrainian forces, facing Russian artillery attacks and a reinvigorated force, eventually lost that battle and the strategic city of Debaltseve on February 18, despite the second Minsk ceasefire agreement that went into place three days prior.

The standard term to describe the forces fighting in Ukraine’s east in the Western press has been “Russian-backed separatist forces,” but the more accurate term for the groups that carried out the bulk of fighting in Debaltseve and Iloviask is “separatist-backed Russian forces.”

Debaltseve marks a turning point in Russia’s strategy in the east. Prior to it, the Kremlin’s primary focus was the supply of arms, equipment, and soldiers. But since Debaltseve, Russian military forces have reportedly increased their recruitment and training of Ukrainians. At least one massive Russian military base now operates in Ukraine to train new recruits. As the proportion of Ukrainians fighting alongside the Russian military increases, the civil war that the Kremlin manufactured may become a reality.

Alina Polyakova is the Associate Director of the Dinu Patriciu Eurasia Center at the Atlantic Council, where she oversees the Ukraine-in-Europe Initiative.

Image: A house which was damaged by fighting is seen in the town of Debaltseve on February 25, 2015. Debaltseve marks a turning point in Russia’s strategy in the east. Prior to it, the Kremlin’s primary focus was the supply of arms, equipment, and soldiers. But since Debaltseve, Russian military forces have reportedly increased their recruitment and training of Ukrainians. Credit: Reuters/Baz Ratner