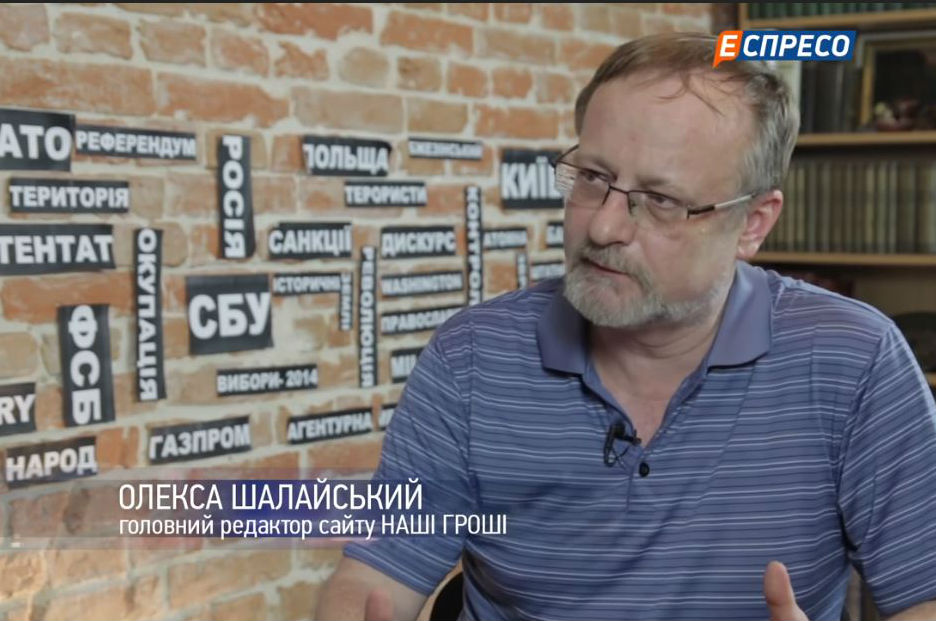 It’s standard fare in any article about Ukraine to mention the country’s enormous, overwhelming, and everlasting corruption problem. It’s also incredibly boring, because hardly anyone has examples or knows how it actually works.

In April, I sat down over coffee and sweets in Kyiv with investigative journalist Oleksa Shalayskiy, editor-in-chief of Nashi Groshi (Our Money), who explained in detail how corruption functions in Ukraine.

Shalayskiy knows what he’s talking about. His watchdog organization regularly uncovers examples of corruption that the top anticorruption organizations use in their public crusades.

But Shalayskiy is anything but loud. Soft-spoken and detail oriented, I had to lean forward multiple times and ask him to speak up.

Shalayskiy said the problem is that officials still believe they must steal. “I cannot not steal because if I don’t, Ukraine will fail,” he said. What he means is that ministers use state funds to cook up schemes that enrich themselves and a small group of “untouchables” who devise the schemes within their ministries, and to run their ministries.

“The same excuse is everywhere,” he said.

A demand for justice and dignity drove thousands to the streets to push former President Victor Yanukovych out of power in 2014. Since then, Ukraine has made some progress on corruption, from establishing the National Anticorruption Bureau and other institutions that fight corruption to setting market prices for natural gas, which had been a huge source of corruption. But the fact remains that none of the really corrupt politicians from the old regime have gone to jail. Instead, they fled to London or Moscow, or walk free in Kyiv.

Shalayskiy explained in detail why that is, and how corruption has functioned in government since the watershed moment of the Maidan.

Within each ministry, he said, there are three categories of people: the untouchables who devise the schemes, the touchables who are open to bribes but can be prosecuted, and then those who must play by the rules.

Before the Maidan, Shalayskiy said that approximately 30 percent of people in the average state ministry were untouchables, 30 percent were open to bribes, and 40 percent were governed by the book.

After the Maidan, the ratio changed: the untouchables shrank to 10 percent, those who took bribes remained constant at 30 percent, and 60 percent could go to jail.

This ratio remained in place until the fall of 2016—and then the kickbacks increased.

Why then, I asked. He hesitated and told me to ask political experts. Eventually, he hazarded a guess: “No punishment,” he said. Shalayskiy suspects that the failure of judicial reform led people to resume their old ways. Additionally, he said, some of the whistleblowers stopped coming forward and giving information.

Of course, since we spoke, Ukraine’s parliament has passed a bill establishing an Anticorruption Court, which could prove decisive.

When I asked a former minister, other journalists, and insiders what they think about Shalayskiy’s figures, they all said his numbers are entirely plausible. Some countered that it’s important to distinguish between ministries, which I readily admit. The Health Ministry under Dr. Ulana Suprun has a squeaky-clean reputation, for example. More journalists need to dig in and figure out what the formulas look like at each ministry. But the broader point is that the old ways of enriching oneself through the state coffers never really disappeared.