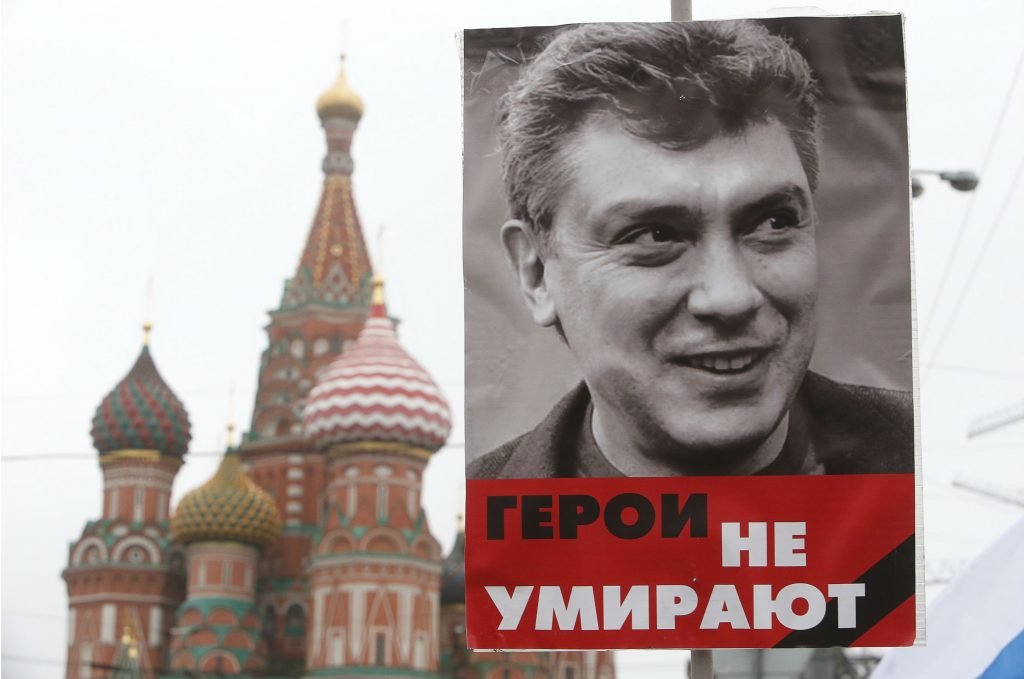 A poster of Kremlin critic Boris Nemtsov, who was shot dead on Friday night, is seen during a march to commemorate him near St. Basil's Cathedral in central Moscow March 1, 2015. Holding placards declaring "I am not afraid," thousands of Russians marched in Moscow on Sunday in memory of Nemtsov, whose murder has widened a split in society that some say could threaten Russia's future. The poster reads, "Heroes don't die." REUTERS/Sergei Karpukhin

Throughout his political life, Boris Nemtsov was a maverick, a “white crow,” as we say in Russian, always choosing principles over political expediency—as when he took on the Communist establishment in the last Soviet elections (and won); when, as governor, he shepherded his Nizhny Novgorod region onto the path of liberal and free market reforms; when, as deputy prime minister of Russia, he challenged the all-powerful “oligarchs” and the system of political nepotism they represented. But it was the rise to power of Vladimir Putin and the solidification of his authoritarian regime that proved Nemtsov to be almost unique among Russian politicians—including those who styled themselves as “democrats” but quickly adapted to new political realities, accepting lush positions in government and state corporations—in staying true to his beliefs, regardless of the risk.

Putin’s arrival in the Kremlin in December 1999 coincided with Nemtsov’s election to parliament in what was (to date) the last genuinely competitive election for the Russian Duma. From the very start, Nemtsov was suspicious of the motives of the former KGB operative and, unlike other leaders of the liberal Union of Right Forces party, did not back Putin in the 2000 presidential election, voting instead for Grigory Yavlinsky. In the Duma, Nemtsov quickly emerged as a leader of the parliamentary opposition, vocally challenging Putin’s Kremlin on such issues as the reinstatement of the Soviet national anthem, the closure of independent television networks, heavy-handed tactics during the Nord Ost hostage crisis, and the politically motivated arrest of oil magnate Mikhail Khodorkovsky. As parliamentary politics in Russia fell victim to the Kremlin’s authoritarian consolidation, and as the heavily manipulated elections in 2003 and 2007 purged the State Duma of opposing and independent voices, Nemtsov found himself in a new role—that of a leading dissident in an increasingly repressive and intolerant system.

He did not shun this role, accepting it as necessary for upholding his views and his aspirations for a democratic Russia against an emerging dictatorship. “I have decided… that I will continue this fight,” Nemtsov told Novaya Gazeta. “They [the authorities] want to destroy my country, they are doing great damage to Russia, they are acting against Russia’s interests. And we must have people in our country who are not afraid to tell the truth.” With the parliamentary and electoral route closed, and television off-limits to him because of a blacklist imposed by the Kremlin, Nemtsov used what avenues he could to deliver his message. He became a regular participant in street protests, frequently arrested and thrown in detention cells, once spending the Christmas holidays in near-torturous conditions in police detention after taking part in a peaceful rally in support of the freedom of assembly. A firm believer that political and civic enlightenment will, in the end, break down the barriers of dictatorship, he published reports detailing the corruption and abuse of power by the Putin regime and presenting facts suppressed by government propaganda. A poll taken by the Levada Center in 2015 showed that 11 percent of Russians (and 19 percent of Muscovites) were aware of the substance of Nemtsov’s exposés—a remarkably high figure given the pervasive media censorship.

Using his high profile and his influence in the Western political world, Nemtsov vigorously campaigned for the successful passage of the US Magnitsky Act that imposed targeted sanctions on Kremlin-connected human rights abusers, introducing an important measure of accountability. In Russia’s traditionally fragmented pro-democracy movement, Nemtsov managed to bring together a wide coalition, Solidarity, that would play a key organizing role in the winter protests of 2011–2012. During those rallies, which brought tens of thousands of people to the streets of Moscow after a rigged parliamentary election—Russia’s largest pro-democracy protests since 1991—Nemtsov’s voice was one of the loudest. “They have proven that they are a party of crooks and thieves,” he told the 100,000-strong crowd in Bolotnaya Square on December 10, 2011, echoing Aleksei Navalny’s famous line. “We must prove that we are a proud and free nation.”

Nemtsov genuinely liked people, and they liked him in return. He could as easily communicate with high-ranking foreign dignitaries as with a pensioner babushka or a local market salesman. A former governor, parliamentary leader, and deputy prime minister, once an heir apparent to the Russian presidency, who had seen the heights of power and privilege, Nemtsov did not shy away from handing out leaflets in the streets and in metro stations, or personally canvassing voters in door-to-door meetings, as he did during his last election campaign in Yaroslavl in 2013. It was a campaign he won, despite the customary media blackout and administrative pressure: the list of the People’s Freedom Party headed by Nemtsov passed the threshold required for representation in the Regional Duma, winning him his first legislative seat in a decade. With this comeback, it seemed the corner had been turned. Nemtsov, the sole opposition legislator in a fifty-strong chamber, used his mandate to successfully challenge corrupt officials in Yaroslavl, forcing high-profile resignations and refuting the Russian proverb that “one on a battlefield is not a warrior.” He was planning to run for the State Duma in Yaroslavl in 2016, and his chances of success—despite the absence of a level playing field—were not insignificant. The return of Nemtsov to the Russian parliament was surely not a welcome prospect for the Kremlin.

The last year of Nemtsov’s life was marked by opposition to the war the Kremlin had unleashed on Ukraine after mass protests there toppled a corrupt and authoritarian president, Viktor Yanukovych. This was an analogy too close to home for Vladimir Putin. Nemtsov was firm and persistent in his criticism of Putin’s annexation of Crimea and his proxy war in the Donbas region. “The war against Ukraine is a crime,” he wrote in August 2014. “It is not our war. It is Putin’s war for his power and his money.” For his position, he was vilified by the Kremlin’s propaganda machine and denounced as a “traitor.” In September 2014, Nemtsov led a 50,000-strong Peace March through the streets of central Moscow. Another antiwar rally was planned for March 1, 2015; Nemtsov also began work on a new report—this time, on Putin’s war against Ukraine. As always, he believed that the Russian people deserved to know the truth.

He also believed that, for all the repression and propaganda, Putin’s regime would eventually succumb to the forces of history, and that Russia would return to a democratic path. “When people hear the truth, those 86 percent [Putin’s official poll numbers] will fall apart. This is why… we are not allowed on television,” Nemtsov said in his last interview on Ekho Moskvy radio, hours before he was assassinated in front of the Kremlin. “Because once people realize that everything… is built on lies, this regime will crumble to dust.” Just as Nemtsov believed, one day Russia will be free from authoritarian rule. And, although he has not lived to see that day, his contribution to Russian democracy will have been one of the most important.

Vladimir Kara-Murza is the chairman of the Boris Nemtsov Foundation for Freedom and vice chairman of Open Russia. He tweets @vkaramurza. Kara-Murza’s essay was first published in Boris Nemtsov and Russian Politics: Power and Resistance (Ibidem Verlag and Columbia University, 2018) and is republished with permission.