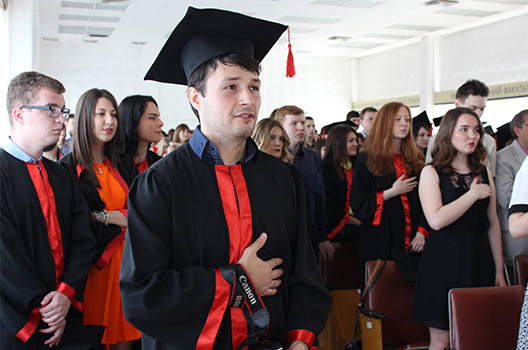 On July 7, 2014, Russian-backed separatists entered Donetsk and occupied four dormitories at Donetsk National University; armed gunmen expelled students from their rooms in the middle of the night. Nine days later, the separatists seized the entire university. During that summer, separatists stole at least seventeen university vehicles and converted student dorms into barracks for their fighters.

At the time, students, administrators, and faculty fled. There was no time to think about packing up the library or the laboratory. But eventually, the university, one of Ukraine’s best, relocated to central Ukraine, to the city of Vinnytsia.

Remarkably, two years after the invasion, the university has almost completely re-established itself.

In October 2014, a pioneering group of students, lecturers, and administrators began to re-establish the university, phone call by phone call. They telephoned each student to ascertain whether he or she planned to continue studying after the university had been moved. “This is Donetsk National University of the Ministry of Education and Science of Ukraine speaking,” a caller would say. They would receive one of two responses: “‘You are the fascists, Banderas’ or ‘I am so happy to hear you. I am together with you,’” Grynyuk and Nagornyak said.

Ekaterina Glushchenko, a graduate of Donetsk National University’s journalism faculty, was working in the Student Life Office in Vinnytsia at the time. “I won’t hide the fact that it was very difficult…But when my closest friends and professors arrived at the train station and I saw them for the first time after a long separation, the hardships evaporated.”

The early pioneers were living three or four people to a room and working eighteen to twenty hours per day. The university had no buildings; they worked out of a conference room in Vinnytsia’s Ministry of Education building. At the time, “we believed that we would return to our homes and offices,” Grynyuk and Nagornyak said.

“Space was very tight, there weren’t enough electrical outlets, and the Internet didn’t always work. When we finally acquired two buildings, the offices often lacked sufficient furniture and we had to take turns sitting in the chairs,” recalls Maria Drobot, a masters degree student in the university’s journalism program and an assistant in the registrar’s office.

When the university obtained its first building on November 3, 2014, the flag of Donetsk National University was presented in a ceremony with then-Ukrainian Minister of Education Serhiy Kvit, government representatives, and locals. They sang the university anthem and many cried.

Classes started immediately after the celebration. In the mornings, students attended lectures; in the afternoons, they washed windows, sawed, and assembled desks for classrooms and beds for dormitories.

“We understood that all of us—here and now—are equal: we are in the same conditions, with the same feelings, inspired, and are going to survive and win,” Nagornyak said.

People in Vinnytsia responded to the arrival of the university in a variety of ways. “Many simply walked up to us and asked how they could help our students and administration. They offered potatoes and canned goods, and other things. We are very thankful to the community for their warm and gracious welcome,” said Drobot.

Other members of the community greeted the university with a mix of skepticism, fearing that the Donetsk residents might be sympathetic to the separatists. “For a long time, the locals couldn’t conceive that there was no longer a university in Donetsk. They didn’t understand that we had nothing to do with what’s going on in the occupied territories,” said Glushchenko.

The arrival of Donetsk National University contributed to increased rents across Vinnytsia, and student housing has been the university’s Achilles’ heel; there’s still a shortage of affordable housing in the city. A majority of students rent two-room apartments they share with five or six people. The university recognizes that housing is a big problem. “If we are allocated land for construction, we will focus all our efforts on building dormitories for students,” Grynyuk and Nagornyak said.

A majority of students were unable to move to Vinnystia for financial reasons, so they continued their education remotely during the first semester of the 2014-2015 academic year, which began in November. By the second semester, the university had begun to operate normally, and the number of students studying remotely dropped.

By the end of its first year in exile, the university had three buildings and 2,500 students signed up for the next academic year. Remarkably, many were local Vinnytsia residents.

“In one year, we were able to build a fully functional university,” said Drobot. In 2015, Donetsk National University was recognized as the best university in central Ukraine and named one of the top ten universities in the country.

By its second year in exile, only students with valid reasons for remaining were allowed to continue their studies remotely. Foreign students have begun to return as well. Today there several dozen international students from Europe, Asia, and Africa.

Thanks to the support it received from the Ukrainian government, foreign universities, and a number of charities, including $350,000 from the International Renaissance Foundation, the university gained three buildings, set up two laboratories, and created a computer center with a language lab.

For its third year in exile, the university plans to enroll between 3,000 and 3,500 students. However, the university needs more space, especially dormitories, which it hopes to acquire in the next two to three years. In the next three or four years, it will offer housing for teachers, and will have more academic buildings, a library, and a science park.

The rector’s office estimates that forty to fifty percent of its faculty moved to the new campus. Some remained behind to guard the original campus, others took jobs elsewhere, and some stayed behind for ideological reasons. Meanwhile, the university in Donetsk remains intact and has sustained no damage from the fighting.

What role might the university play in reconciliation when the war ends?

“It is already…playing a great role in resolving the conflict,” Drobot said. The university started the Donbas Ukraine Education Center, which helps new arrivals from eastern Ukraine complete their student documentation, take state exams and evaluations, and receive copies of their high school diplomas.

And perhaps more important, the university is serving as a living example of what resilience, determination, and creativity in the face of destruction looks like.

Melinda Haring is the editor of the UkraineAlert at the Atlantic Council. She tweets @melindaharing. Special thanks to Joshua Solomon, who translated numerous interviews from Russian to English, and Steven Steiner, who made the article possible.