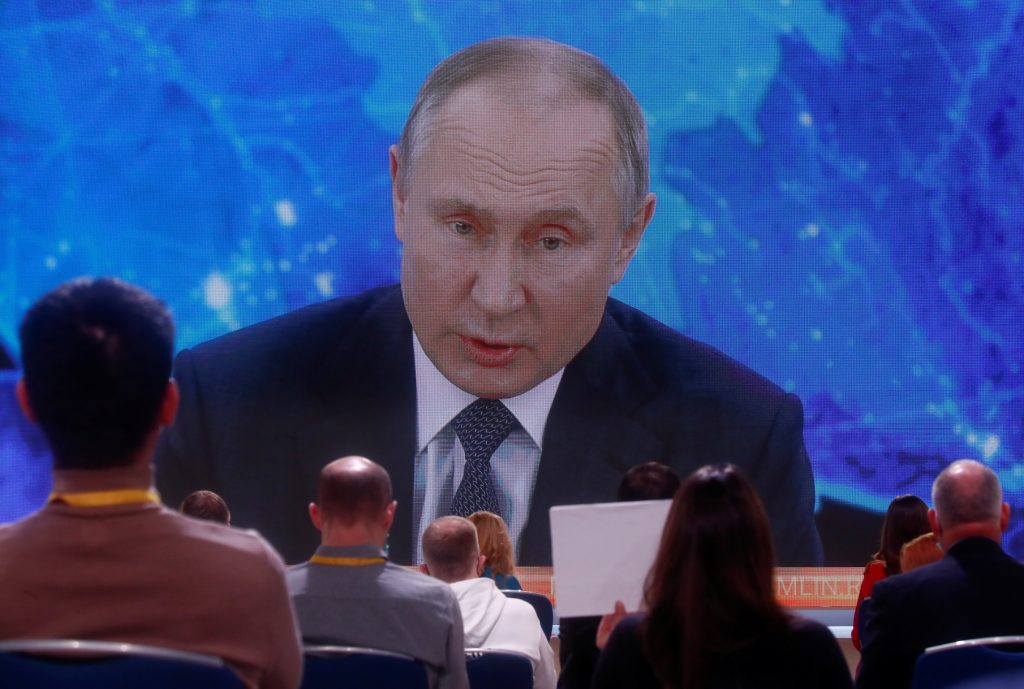 The headline read like a Moscow propagandist’s dream. “Kremlin says fears Ukrainian side could restart civil war in eastern Ukraine,” it declared. Here were all the key elements of the disinformation narrative underpinning Russia’s seven-year campaign of aggression against Ukraine, expertly crammed into a single sentence: the conflict in eastern Ukraine is a civil war; Ukraine is responsible for any escalations in violence; and the Kremlin is merely a concerned bystander.

Such wording would have been entirely unremarkable if published by Russia’s state-run media. However, this wasn’t RT or Sputnik or any of the other Kremlin platforms masquerading as legitimate journalism; this was Reuters, one of the world’s most venerable and authoritative international news agencies.

The timing of the Reuters report could hardly have been worse. It appeared on March 31, just hours after the US military’s European Command had raised its threat level to the highest category of “potential imminent crisis” in response to the massing of Russian military forces close to the Ukrainian border. With international concern mounting over a possible major escalation in the undeclared war between Russia and Ukraine, Reuters had made the remarkably irresponsible decision to amplify Kremlin talking points without any attempt at qualification or even the use of quotation marks.

In fairness to Reuters, the agency is only one of the many news organizations who have found themselves inadvertently enlisted by the Kremlin in its information war against Ukraine. Indeed, most international media outlets have faced similar problems at some point or other since the conflict first erupted in 2014.

This is no accident. The hybrid nature of Moscow’s Ukraine offensive is specifically designed to defy easy definition. Russia has deployed a confusing combination of conventional forces, mercenaries, volunteers, and local collaborators in order to create a veil of plausible deniability, while at the same time disguising the entire operation behind layer upon layer of disinformation.

Russia’s efforts to blur the traditional boundaries between peace and war have fueled a lively debate within the international information space over the correct categorization of the conflict. At one end of the scale, the Kremlin has championed efforts to characterize the armed confrontation as a “Ukrainian civil war.” Meanwhile, the Ukrainians themselves have always been clear that they are facing Russian aggression, albeit of a highly unconventional nature.

When hostilities first broke out in eastern Ukraine, there was considerable disagreement over the identities of those doing the actual fighting. Many international news organizations initially referred to “Ukrainian rebels” or “Ukrainian anti-government forces,” even in cases involving self-confessed Russian nationals who had entered the country specifically to wage war. As the sheer scale of Russia’s involvement became more and more apparent, such terminology gradually gave way to talk of “pro-Russian separatists,” or “Russian-backed militants.”

Critics argue that even these more nuanced terms fall well short of the journalistic obligation to inform. They claim that by failing to adequately explain Russia’s leadership role in orchestrating and managing the conflict, elements of the international media have helped enable Vladimir Putin’s war of aggression.

A key concern is the manner in which Russia has been able to exploit traditional journalistic notions of balance and impartiality. As any student of journalism knows, there are always two sides to every story and the truth usually lies somewhere in the middle. However, this otherwise admirable commitment to objectivity is rendered absurd when one side bases its entire strategy on deceit. Put simply, there can be no meaningful middle ground between deliberate Russian disinformation and reality. In such exceptional circumstances, observing the time-honored rules of journalistic neutrality merely serves to legitimize the aggressor. To paraphrase the old aphorism, “the only thing necessary for the triumph of evil is for good journalists to stay neutral.”

The prioritizing of journalistic objectivity over common sense has led to dangerously distorted portrayals of the conflict in Ukraine. Despite more than seven years of Kremlin aggression, international media reports still tend to adopt a misleading “he said, she said,” approach and frequently give equal space to Russian denials, despite the ready availability of compelling evidence that makes a complete mockery of Moscow’s assertions. This results in international coverage that is often far more damaging than the easily identifiable fakes produced by Russia’s own media because it passes under the radar and enjoys levels of credibility the Kremlin cannot hope to match.

Reporting that amplifies Moscow’s blanket denials is all the more troubling as there can be no reasonable doubt over Russia’s military involvement in Ukraine. Russian soldiers have been captured deep inside Ukraine, while sightings of Russian military hardware are frequent. Many of the people who served as figureheads for the Kremlin offensive in the early days of spring and summer 2014 have since provided eyewitness accounts detailing the role of the Russian military, while the entire international investigation into the downing of flight MH17 over eastern Ukraine is a treasure trove of incriminating evidence that leads directly to the Russian Armed Forces.

The international media’s emphasis on impartiality at the expense of accuracy appears to be out of step with the prevailing mood elsewhere on the global stage. While the wheels of international justice are notoriously slow to turn, the International Criminal Court in The Hague recognized Russia’s involvement in eastern Ukraine as far back as 2016, leading to Russia’s withdrawal from the ICC. All 27 EU member states have been sufficiently convinced of Moscow’s guilt to maintain sanctions for over seven years and counting. In recent weeks, the foreign ministers of G7 nations Canada, France, Germany, Italy, Japan, the UK, and the US signaled their growing impatience at Russia’s endless deceptions with a joint statement that included the no-nonsense declaration, “Russia is a party to the conflict in eastern Ukraine, not a mediator.” In contrast, the handful of nations who are actually prepared to back Russia over Ukraine at the UN constitute a veritable rogues’ gallery of pariah states and dictatorships such as North Korea, Venezuela, and Syria.

With the Russian military now concentrated on the Ukrainian border in overwhelming strength and senior Kremlin officials making ominous statements about the possible “destruction of Ukraine,” accurate reporting has never been more urgently necessary. Employing unambiguous language to describe Russia’s Ukraine war will not magically force Moscow to withdraw, but it will create the kind of much-needed clarity that could help deter further escalations and consolidate international opinion against the aggressor. Russia knows this, which is why it has gone to such great lengths to muddy the waters and conceal its involvement in Ukraine.

The past seven years have demonstrated that disinformation is the single most important element of Vladimir Putin’s hybrid war doctrine. This has created a range of novel challenges for Ukraine and the entire international community that we are only now beginning to grasp. The jury is still out on the best methods to counter the kind of innovative information warfare practiced by the Kremlin, but the international media can certainly begin by making sure they no longer play the role of unwitting accomplices.