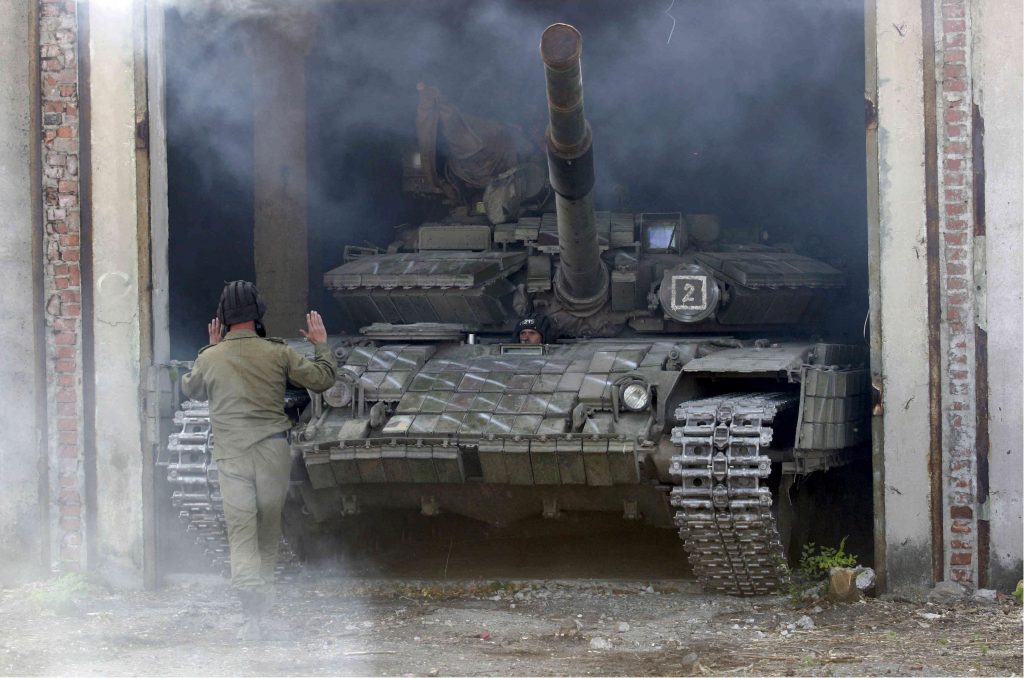 A member of the self-proclaimed Luhansk People's Republic (LNR) forces guides a tank to park after withdrawing it further from the frontline outside Luhansk, Ukraine, October 3, 2015. REUTERS/Alexander Ermochenko

If anyone had attempted to report on “German-backed forces” in Nazi-occupied France or “pro-Soviet forces” during the Prague Spring, they would have been dismissed as either hopelessly misinformed or deeply disingenuous. While local collaborators and convenient euphemisms were plentiful in both instances, there was never any doubt as to who was really in control. This common sense approach seems to have been lost in Ukraine, where the international media has played a key role in creating the ambiguity that has allowed Russia’s hybrid war to succeed.

Why has the media been so cautious about Russia’s role in the conflict? It is not due to a lack of evidence. Proof of Russian involvement has been overwhelming since the early days of the fighting in eastern Ukraine. Almost all of the initial leaders of the breakaway republics were Russian citizens. International journalists themselves have witnessed convoys full of Russian weapons crossing the border and interviewed Russian officers in the conflict zone, while even pro-Kremlin reporters in Ukraine have slipped up by broadcasting footage of equipment only available to the Russian military.

Online sleuths have produced convincing evidence of cross-border Russian artillery attacks on Ukrainian positions, while the social media selfies of Russian soldiers have exposed their deployment in Ukraine. There have been instances of entire groups of Russian troops captured deep inside the Ukrainian combat zone, which the Kremlin has dealt with by disowning some and claiming others simply “got lost.”

The MH17 incident is worthy of a whole chapter of its own: sophisticated anti-aircraft systems are not deployed across international borders and into conflict zones in isolation.

Then there is the whole subject of the Russian “volunteers” and “vacationers,” a motley crew of Russian military personnel operating alongside army veterans, mercenaries, far-right fanatics, and criminal dregs. Figureheads for these fighters have repeatedly put their overall number at fifty thousand—a staggering figure when one recalls how early insurgency poster boy Ihor “Strelkov” Girkin admitted at the height of the fighting in May 2014 that he had struggled to recruit one thousand Donbas residents.

What emerges is a picture of a manufactured insurgency inspired by Kremlin operatives, armed by the Russian military, manned predominantly by Russian fighters, and led from Moscow. Nevertheless, most international news outlets continue to hedge their bets. Many report on “pro-Russian forces,” despite the redundancy of such terms when discussing Russian nationals. Heavyweights like the BBC and Canada’s CBC acknowledge the Russian factor while still referring to a “Ukrainian Civil War.”

There are numerous reasons why the media has been so neutered in its choice of wording. One key factor is the commitment to objectivity that marks Western journalism (in theory, at least). This dedication to telling “both sides of the story” has been masterfully exploited by the Kremlin, which has managed to shift the middle ground by demanding the inclusion of its own narratives. A classic example of this was the depiction of Ukraine’s popular uprising against an authoritarian regime as a CIA-led fascist coup.

When faced with such strikingly different narratives, there can be no meaningful balance. Instead, journalists can either make a judgment call or remain stringently neutral. The vast majority have opted for the latter. To have done otherwise would have meant abandoning the core ethical obligations of modern journalism. Yet by avoiding common sense conclusions, they have provided an invaluable service to the Kremlin.

The international media has also taken its lead from the political arena. Russia’s denials of involvement require no further explanation, but Ukraine must also accept a fair share of responsibility. Kyiv has refused to officially acknowledge a state of war and has chosen to portray the conflict as an anti-terrorist operation. There are a number of legal and strategic arguments for this, not least the desire to keep international financing channels open while denying the Kremlin any opportunity to embark on a full-scale military invasion. Even so, it has created more confusion.

The reasons for reticence on the part of international political leaders are harder to fathom. Some have spoken frankly about Russian military aggression, while others have sought the safety of general references to “Russian involvement,” while calling on all sides to cease hostilities. Perhaps they hope to keep Russia’s exit options open and avoid a full-scale military confrontation with the Kremlin.

This is not to say there has been no progress. In the early days of the conflict, many media outlets chose to portray the fighting as an exclusively Ukrainian domestic affair, employing terms such as “Ukrainian rebels” and “anti-Kyiv separatists.” These monikers have gradually been replaced by “Russian-backed forces” and “pro-Russian forces.” The US State Department sought to take this evolution a step further by introducing the phrase “combined Russian-separatist forces” in spring 2015. This technically accurate but somewhat awkward term has failed to shift perceptions. It poses questions rather than providing clarity: is Russia merely providing some military advisers? What are the relative proportions within this combined force? Outside observers may reach the conclusion that Russia’s involvement is anything but decisive.

In light of the challenges presented by Russia’s hybrid approach to international conflict, the international community clearly needs a new lexicon. The concept of Russian hybrid warfare has gone mainstream over the past two-and-a-half years, but has yet to translate into the kind of unambiguous terminology capable of accurately portraying what Russia is doing in east Ukraine. One new way of describing the military units in east Ukraine could be “hybrid Russian forces”: this would highlight Russia’s overall responsibility, while acknowledging that the forces in question are mixed in composition and differ from conventional armed forces. Likewise, what is variously called “the Ukraine crisis” or “the Ukraine conflict” would be more accurately described as a “Russian hybrid war.”

It has long been claimed that the pen is mightier than the sword, and this has never been truer than in the information age. The international media has played a key role in enabling Russia’s hybrid war against Ukraine; it can now help to turn the tide by adopting terminology that accurately captures the realities behind the bloodshed.

Peter Dickinson is the publisher of Business Ukraine magazine and Lviv Today, and editor-at-large at The Odessa Review. He was previously chief editor of Ukraine Today and What’s On Kyiv.