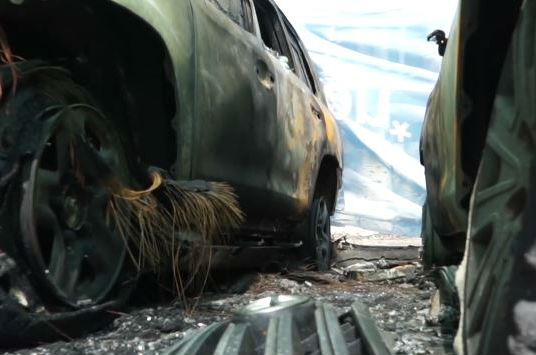 Even the August 9 destruction of OSCE vehicles (pictured above) in Donetsk didn’t cause angry reactions from Washington or Brussels. So far, the West has reacted to the current cycle of violence only with statements of concern, which Moscow predictably ignores. Credit: Radio Free Europe/Radio Liberty.

This month, Russia stepped up military pressure on Ukraine, concentrating about fifty thousand troops along its border with Ukraine, using its proxy militias to shell Ukrainian government positions in the Donbas, and threatening Kyiv with “a big war.”

The current escalation indicates Russian discontent with Ukraine’s refusal to make unilateral concessions such as allowing the creation of a demilitarized zone in Shyrokyne near the city of Mariupol without reliable guarantees that Russian-backed separatists won’t take back this area after Ukrainian forces withdraw.

Parties to the Minsk contact group discussed this issue at an August 3-4 meeting but failed to agree. They also bickered over the idea of withdrawing heavy weapons of less than 100-mm caliber. In both cases, the main obstacle has been the lack of reliable guarantees that separatists would keep their part of the bargain.

Escalation in the Donbas and maneuvers of Russian forces along Ukrainian border are designed to impress not only Kyiv, but also the French and Germans. It was French and German pressure—and US pressure as well—that in July 2015 led the Ukrainian parliament to add to the draft constitutional amendments a provision referring to self-governance in certain districts of the Donbas (which pertain to the Russian-occupied territories). Many Ukrainian MPs see that provision as a concession to Russia, and a potential danger to Ukraine’s sovereignty and territorial integrity.

Ukraine’s parliament plans to vote for the draft constitutional amendments on August 31 and in early September, and Russia still hopes France and Germany will help it push provisions that give it the opportunity to influence Ukraine through the Moscow-controlled separatist areas of the Donbas region.

On August 17, Russian Foreign Minister Sergey Lavrov expressed hope that Moscow— together with Berlin, Paris, and Washington—”will be able to help establish direct dialogue” between Kyiv and the separatists. But so far, Ukraine has rejected direct negotiations with separatists because they have not been legitimately elected, and consequently are not legitimate representatives of the Donbas people.

Ukraine’s local elections set for October 25, 2015, also annoy Moscow. Russia’s proxy in the Donbas—in violation of the Minsk II agreement—refused to hold elections in accordance with Ukrainian law and scheduled its own elections on October 18 and November 1. The Kremlin wants to force Kyiv and the West to recognize the predictable results of such separatist “elections” and thus legitimize the Moscow-controlled regime.

It is also possible that constant shelling will provoke Ukraine to attack Russia in response. If that happens, Russia might use such an attack as an excuse for another major escalation with the involvement of Russian regular troops.

So far, the West has reacted to the current cycle of violence only with statements of concern, which Moscow predictably ignores. Even the August 9 destruction of OSCE vehicles in Donetsk didn’t cause angry reactions from Washington or Brussels.

The West should understand that Moscow’s readiness to fulfill its obligations cannot be bought with concessions at Ukraine’s expense. Putin wants all of Ukraine, and after he gets it, he’ll want the Baltic states.

Only the following measures can stop Russian aggression:

First of all, the West should make clear that any further escalations—even minor ones—will cost the Kremlin dearly. Strong sanctions packages should be on the table, ready to come into force in case of renewed attacks or shelling. Moscow would think twice before escalating if it knew that such actions would disconnect Russia from SWIFT, and that a possible attack on Mariupol would spark an embargo on Russian oil.

Secondly, the West could deter Russia from constantly transferring military equipment to separatists by compensating Ukraine with defensive weapons deliveries. The Kremlin might lose its eagerness to provide separatists with new battle tanks and APCs if it knew that Kyiv would get an appropriate amount of Javelins to neutralize them. Western counter-battery radars could become a good answer for Russia’s supplies of artillery systems. And so on, until Moscow understands that its military transfers are useless.

Thirdly, the EU must dramatically boost financial aid to Ukraine. One of the main goals of Moscow’s military escalation is to exhaust Ukraine and make it a failed state. Even one-fifth of the EU’s assistance to Greece would help Ukraine overcome its present crisis and deprive the Kremlin of the joy of seeing the Ukrainian economy collapse.

Finally, the West must change its paradigm of helping Ukraine, and begin resorting to the most effective measures instead of the cheapest. France and Germany should remember who blocked Ukraine’s path to NATO common security, and the EU should recall whose oil and gas money allowed Putin to rebuild the army that has killed thousands of Ukrainians.

Maksym Khylko is Coordinator at the East European Security Research Initiative, and Senior Research Fellow at the Taras Shevchenko National University of Kyiv and at the Foreign Policy Research Institute in Ukraine.