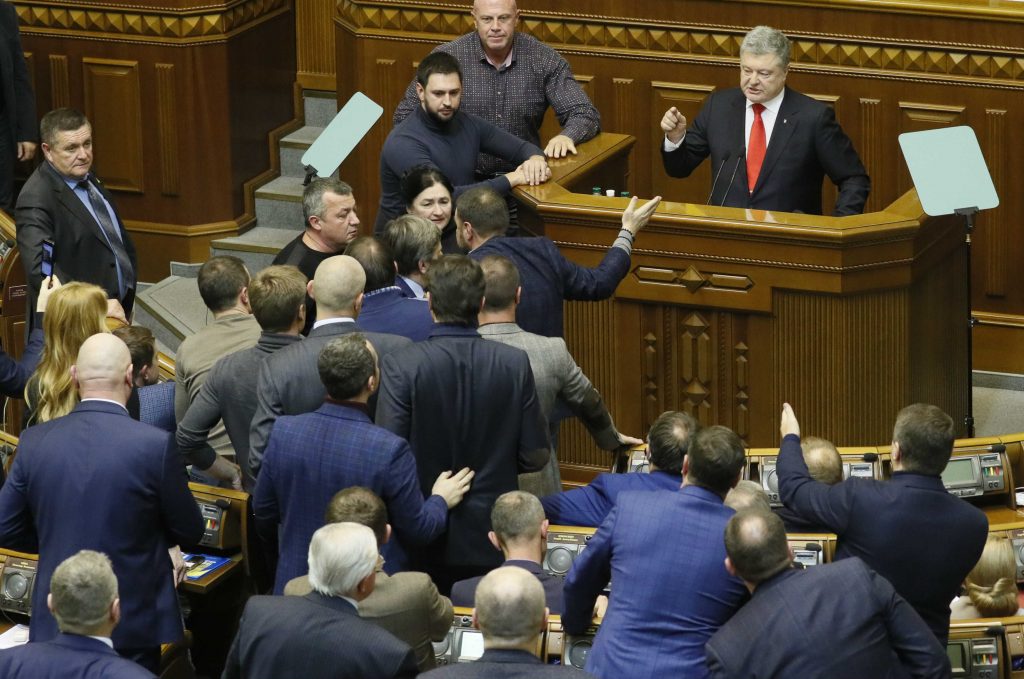 The past several days have been historic ones in Ukraine’s development as a sovereign and democratic nation. Moscow’s unprovoked attack on and seizure of three Ukrainian ships in the Black Sea on November 25 began this process. This attack represents a serious escalation of Kremlin aggression because it was done openly by regular Russian military forces. Moscow was not hiding its role—as in the Donbas—behind the fiction that local “separatists” were running a rebellion.

Russian naval forces first rammed one of the Ukrainian boats and then opened fire. Ukrainian communication intercepts show that Russian commanders on shore gave their ships orders to undertake this action and noted that the situation was being monitored by senior officials in Moscow. The Kremlin was likely trying to provoke the Ukrainian ships into firing in order to justify a larger Russian military response. Moscow successfully used this tactic to start its 2008 war with Georgia, but Ukraine wisely did not take the bait.

In response, President Petro Poroshenko convened Ukraine’s Security and Defense Council (NSDC), which recommended that the government declare a state of martial law covering the entire country for two months.

For many in the West, “martial law” conjures up images of dictators and troops strutting down city streets in fatigues. But for a country fighting a defensive war against the world’s second most powerful military, martial law is not an extreme measure. It can provide the government the means to better mobilize and direct resources against a dire threat. In fact, Poroshenko had been criticized for years, including by reform-minded politicians, for not seeking martial law earlier.

The Ukrainian public pays great attention to politics. So, on Monday, November 26, many people were jumping back and forth between two not quite consistent thoughts. On the one hand, they had a growing apprehension about a possible, greater Russian military strike. On the other, they began speculating about Poroshenko’s “political motivation” for taking the NSDC recommendation to the Rada for approval. Was he doing this to bolster his declining political rating? To delay next March’s presidential election? Poroshenko’s political opponents were also happy to push this line of thinking. And some in civil society, which does outstanding work promoting reform and democratic practice, began to raise the specter that martial law might be a step toward authoritarianism.

The Rada met late on November 26. After contentious bargaining, it approved a compromise measure for martial law. First, they reduced the period for martial law to one month. Second, they limited the scope: it would not cover the whole country; it would cover the ten oblasts bordering Russia, the Sea of Azov, and Transnistria in Moldova. In conjunction, the Rada formally established March 31 as the date for the first round of the presidential election.

Credit for this sensible compromise goes to three individuals: Poroshenko, for taking the proposal to the Rada and his willingness to accept less than he asked for; Yulia Tymoshenko, Poroshenko’s leading opponent in the upcoming election, who, for the good of the country, was willing to let the president get martial law through the Rada; and former Prime Minister Arseniy Yatsenyuk, the head of the People’s Party, who knows how to cut a deal when the stakes are high.

This process was messy, but ultimately a triumph, a democratic triumph in very difficult circumstances. The untidiness, though, does exact a price. Moscow has been at war with Ukraine for nearly five years.  The international community has been slow to recognize this fact and take appropriate action. This has been true each time Moscow escalated the conflict. What’s more, Kremlin propagandists are ready with each new provocation to change the subject to the supposed inadequacies of Ukraine’s leaders, politics, and society.

This means that the natural inclination of Ukraine’s political class to focus on the alleged or real political motivations behind national security measures can divert at least for a time the attention of Western media and statesmen from the core issue: the strategic danger posed by Moscow’s latest outrage. The same is true in particular for the warnings, issued at times with hyperbolic headlines, of alleged growing authoritarianism.

While some Western statesmen, European Council President Donald Tusk and US Secretary of State Mike Pompeo come to mind, quickly condemned Moscow’s attack, others called for restraint by both sides. In other words, for restraint by the aggressor and the victim. Such assessments are craven. And they rely on the notion that the key issue in Eastern Europe is not Russian revisionism, but Ukraine’s internal inadequacies. At this perilous moment, it is essential for all interested in stability in Europe to understand this geopolitical reality and to make it an embarrassment to utter such nonsense in public.

John E. Herbst is director of the Atlantic Council’s Eurasia Center and a former US ambassador to Ukraine.