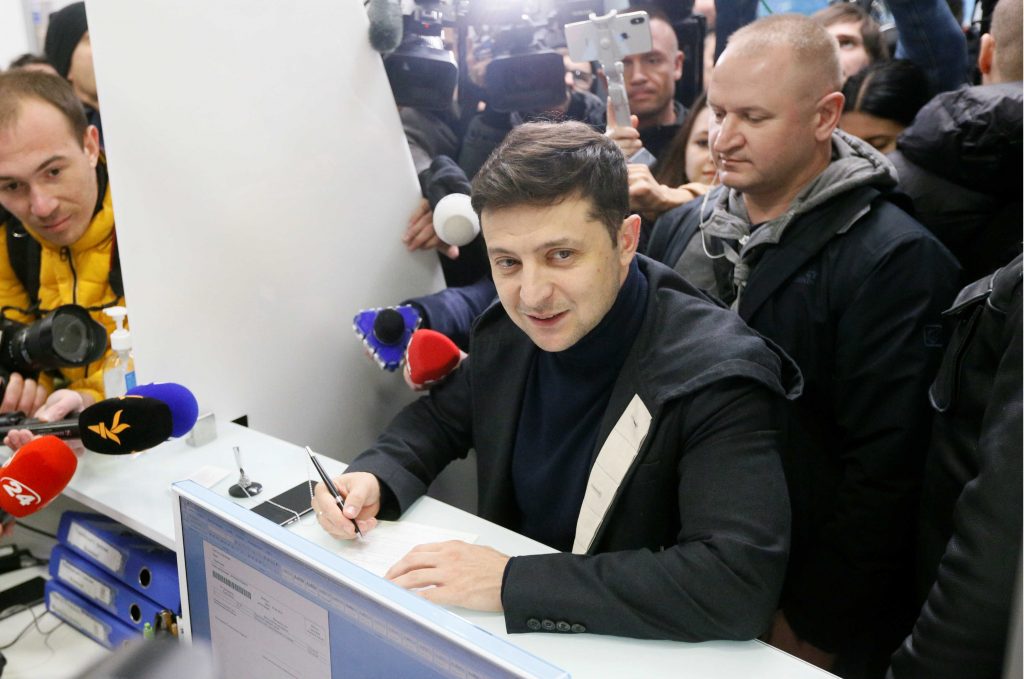 With polls putting Ukraine’s incumbent president Petro Poroshenko far behind TV actor Volodymyr Zelenskiy ahead of Sunday’s run-off election, it is worth considering how the West helped put this secretive comedian, backed by oligarchs, on the cusp of becoming commander-in-chief of a country at war with the Kremlin.

A case in point occurred in February, a month before the first round gave Zelenskiy 30 percent compared to Poroshenko’s 16 percent. When Denis Bihus, a muckraking journalist funded by the United States and the European Union, accused “the president’s friends” of smuggling Russian military parts in 2014, it seemed like a bombshell.

In fact, it was a hatchet job.

The alleged culprit’s father was a security official before Poroshenko fired him. They’re also business partners. But Bihus presented no evidence linking either man to the smuggling. In fact, when the same story aired two years earlier, it received little attention. During the Kremlin’s 2014 invasion, those desperately needed parts could only be bought on Russian black markets.

This time, with unverified text messages that shed little new light, Bihus’ allegations generated a lot more heat. How and why it ignited a scandal this time remains murky. But the politics became clear a few days later when oligarch Ihor Kolomoisky’s TV channel featured Bihus on a two-hour talk show devoted to bashing Poroshenko.

Currently living in Israel, Kolomoisky lost a fortune in Kyiv’s bank reforms. He’s also Zelenskiy’s hardly secret sponsor. He probably saved southern Ukraine from Russian invasion with methods that included bostering local militias and ensuring regional officials’ loyalty. But the price for Kolomoisky’s services was high. His crooked banking empire also despoiled the country of an alleged $5.5 billion, leading to the bank’s nationalization. That conflict is currently being litigated in London; Kolomoisky wants $2 billion back from Ukraine’s budget.

His sneaky grab for the presidency surely can’t be what Ukraine’s Western supporters wanted when they demanded the oligarch’s divestiture as a condition for the Western aid that has poured into the country since 2014, including millions for anti-corruption projects. Bihus’s show, for example, received $150,000 in US grants between 2016 and 2018 from the US non-profit Internews, which is currently running a $35 million, five-year media program in Ukraine. Leaving aside the questionable practice of Western governments paying foreign journalists, these are not huge amounts. But they are parts of programs with disproportionate impact on public opinion.

Bihus’s role as a prop in Kolomoisky’s blatantly partisan marathon vividly demonstrated how some of these well-intentioned projects have ended up reinforcing the already powerful anti-government messaging from the Kremlin and the deposed oligarchs who still own Ukraine’s most powerful TV channels. Given the dearth of competent alternatives in Ukraine’s political class, this has helped put Zelenskiy in reach of Ukraine’s presidency.

It’s undoubtedly true that Ukrainians are in a foul mood. A 2018 poll funded by USAID, the United States’ foreign aid agency, showed that those believing nothing will change grew from 42 percent to nearly half in one year.

What explains the dismal mood? While Poroshenko deserves blame for many mistakes and failures, he also deserves credit for leading the most competent, reformist government in Ukraine’s independent history. It’s a low bar, certainly. Yet none of the country’s real achievements received a fraction of the attention as corruption. These included structural reforms in banking, the gas trade, and public procurements that have saved $6 billion on costs previously lost to corrupt schemes. Of course, banking reforms are boring and technical. Yet, not even visa-free European travel lifted the gloom.

The grinding war in the east looms in public opinion. Kept at a low simmer, the conflict has killed over 13,000 people since 2014. Few families are unaffected. Unfortunately, aspects of anti-corruption programs have amplified an already stressful atmosphere

Acting on the never-tested assumption that their anti-corruption models are effective, much less universal, donors began funding a variety of activists, NGOs, and journalists after 2014 to expose corruption in Ukraine. In addition to “awareness raising,” this has primarily consisted of “naming and shaming” the powerful followed by demands for their prosecution and punishment. When the subjects of the various exposes never went to jail, the grantees, bolstered by donors and diplomats, accused the government of bad faith and stalling.

Bad faith is a real problem. But even given political will, corruption in most of the world’s countries, including Ukraine, isn’t a flaw in the system that can be “fixed” by punishment. It’s the system itself. Moreover, it’s a system—defined broadly as favoring the powerful—which every country has had to one degree or another for most of history. That began changing minimally only two centuries ago. But even today, the exceptions are few, nearly all are in the West, and many are faltering. Witness the United States.

Yet, rather than recognizing that “corruption” is a stage of social and political development, traditional corruption fighters see it only as a moral failing. The results, in the colorful words of Europe’s leading anti-corruption expert Alina Mungiu-Pippidi, “look much like an invasion of the temperance league in a pub on a Friday night: a lot of noise with no consequence.”

Largely, that’s because journalistic exposes are a lot easier to do than successful prosecutions of high-level financial crimes. It’s also why dozens of books about the 2008 Great Recession haven’t put a single Western official in jail.

Ukraine’s criminal justice system is a blunt instrument. It doesn’t prepare competent prosecutors able to win convictions against the top defense attorneys that the powerful can always afford. Add ill-trained, overworked and corrupt judges to understand why it has been nearly impossible to win convictions in high-level cases without eventually losing on appeal—or using authoritarian methods.

But without bad guys going to jail or losing power, these approaches might be harmful. The almost exclusive focus on wrongdoing hasn’t created a “toxic atmosphere” for the corrupt. Instead, it seems to have created a toxic atmosphere for everyone, fueling such powerless outrage, anger and cynicism that vast swathes of the public are willing to vote for a virtual candidate who avoids questions, debates, and independent drug testing.

However, proponents of these methods seem oblivious or indifferent to such predictable social and political consequences. Until recently, they didn’t consider the downsides of their policies at all, such as how anti-corruption drives have brought authoritarians to power or are used politically. As evident by the Kremlin’s gleeful support of Zelenskiy, it likes nothing more than seeing Ukrainians disaffected with their government. Western donors should stop helping.

To reduce corruption, Ukraine needs a competent legal system that does not exist. Without it, the continued focus on exposes of alleged crimes that can’t realistically be punished seems irresponsible and counterproductive. Better to spend the money on an entertaining and educational series like a “CSI Kyiv.” Maybe that will produce a better TV hero for Ukraine’s next president.

Mary Mycio is a lawyer who has worked on donor-funded media programs in Ukraine for two decade, including with Internews. She is also author of “Wormwood Forest: A Natural History of Chernobyl.”