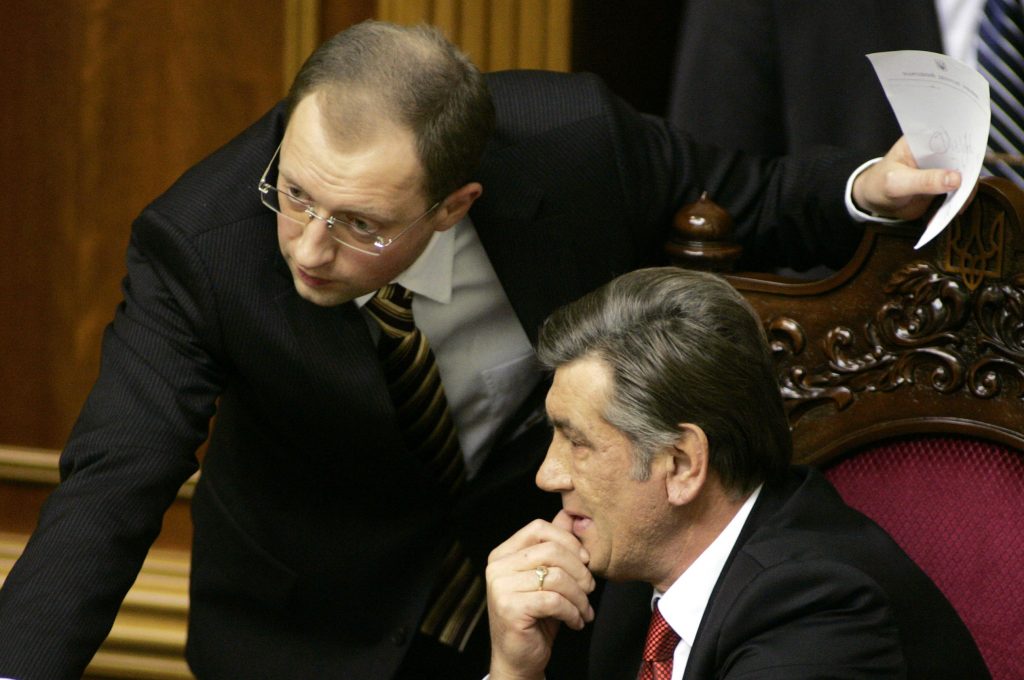 Ukraine is a relatively young country. Its political traditions are still developing and its electorate can still be easily beguiled by every new leader who promises to bring the nation out of the economic misery it was immersed in after the collapse of the Soviet Union. Ukraine is still desperately poor, ranked among the poorest countries in Europe.

But one thing can be already said: the higher the expectations associated with a new leader, the more painful his or her downfall. A classic example is the case of President Viktor Yushchenko, who was the symbol of the Orange Revolution. In December 2004, he took 52 percent of the vote in the third round of the presidential election; by 2012, his party barely managed to capture one percent.

Recently, Yushchenko’s pattern was repeated by former Prime Minister Arseniy Yatsenyuk, who came to power on the wave of the Revolution of Dignity, and together with President Petro Poroshenko gathered more than 40 percent of the votes in the 2014 parliamentary elections. A year later, Yatsenyuk’s 1.2 percent popularity rating led him to seriously compete with Yushchenko for the title of Most Unpopular Ukrainian Politician.

Apparently, whatever Yushchenko and Yatsenyuk were doing, it was never enough: they would never produce the miracles people were expecting—particularly since revolutions are never good times for economic growth.

Perhaps the winner in this helter-skelter pattern of Ukrainian politics is one who, instead of rolling down from the heights of popular excitement, slowly climbs up instead. The new Prime Minister Volodymyr Groisman had an advantage his predecessor was deprived of: he arrived on the cusp of post-Maidan disappointment and apathy, and his rating began at 2 percent.

Meanwhile, by mid-2016, the Ukrainian economy, after nose-diving by 20-30 percent, hit rock bottom and finally began to stabilize. Industrial output is currently showing between 1.5 and 5 percent growth for different industries, allowing for modest optimism. For the first time in eighteen months, employment increased by fifty thousand jobs; this is after the hryvnia exchange rate dropped precipitously from $0.125 and finally steadied at $0.042. The national currency devaluation helped improve the foreign trade balance, which suffered a painful 30 percent fall over the previous two years.

The possibility of Ukraine becoming an economic miracle in the near future is not far-fetched: Ukraine has a highly skilled and yet very cheap labor force. Today, the average monthly salary for an industrial worker in China is $700, while in Ukraine it is $170. However, unlike China, Ukraine has the benefit of a Deep and Comprehensive Free Trade Area Agreement with the EU and western Ukraine is only one day by truck from the EU’s 500 million consumers. All of these factors make Ukraine an ideal candidate for industrial outsourcing over the next ten
years, repeating the Chinese model of development, but on the scale of Europe.

But the average Ukrainian man on the street does not give a fig about the theory of economic cycles, and instead strongly associates the economy’s ups and downs with the specific political leader who happened to be at the helm at that time. Yatsenyuk’s name will be forever pegged to the hard times Ukraine went through in 2014 and 2015. And no matter how much the economic upswing was predetermined, Groisman will certainly take credit for it.

With economic growth, his rating will skyrocket, and the current new prime minister might be hailed as a national hero who transformed Ukraine from the basket case of Europe into a thriving and vibrant nation.

Mykhailo Kukhar is an economist with IMF Group Ukraine. Alexei Sobchenko is an independent analyst and a former US Department of State employee.

Image: Then Ukrainian President Viktor Yushchenko (R) speaks with then Parliament Speaker Arseniy Yatsenyuk during a session at the parliament in Kyiv December 11, 2007. REUTERS/Gleb Garanich