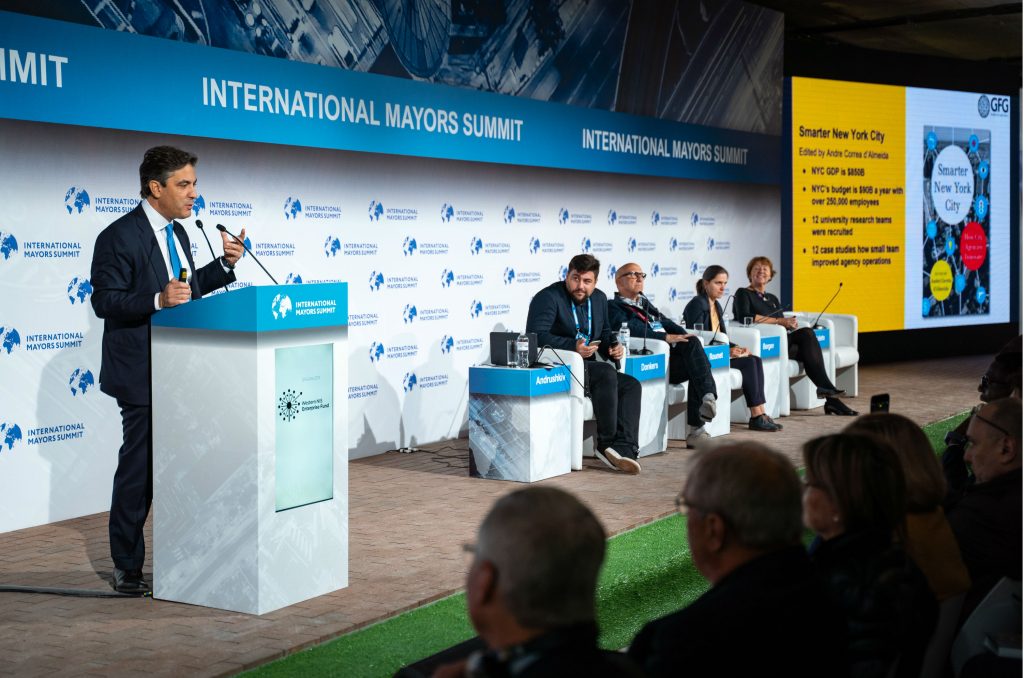 Today, 54 percent of the world’s population lives in cities, and by 2030, two-thirds likely will. Mayors are city managers, responsible not only for quality of life issues like access to water, roads, and infrastructure; they’re also facing global challenges like climate change, security, and migration.

Now in its third year, the International Mayors Summit (IMS), organized by the Western NIS Enterprise Fund, is a gathering that allows Ukrainian local government leaders to meet their international colleagues, as well as business representatives and activists, to collaboratively find solutions that will improve citizens’ lives.

The summit is not just a conference. Over 150 Ukrainian mayors come to Kyiv every year to meet world leaders in urban development. It has become a platform for professional matchmaking and a place where potential partnerships are born. Last year, the multinational corporation Visa, which is actively working on a cashless economy, presented a case of effective cooperation occurring in Zhytomyr, 140 kilometers from Kyiv, which is utilizing a cashless payment system in public transport. A year later, the company is proudly speaking about other projects, cooperating with the cities of Mykolaiv, Chernivtsi, Ivano-Frankivsk, Kyiv, and others.

With IT becoming an important reform instrument, data analytics is a popular topic. Datagroup, the leading fixed-line telecom company, demonstrated software for safe city systems and solutions for healthcare. After all, business often drives innovation.

The summit formula is simple: innovation plus practical impact. The organizers try to experiment, and include pitches by Ukrainian mayors. This is probably the most valuable portion: mayors briefly present innovative projects they’ve implemented. The mayors of Khmelnytskyy and Zhytomyr, who have shown great openness and effectiveness, have become IMS favorites. The Khmelnytskyy mayor presented the case of an innovative waste-sorting terminal created with NovaPoshta, one of the biggest Ukrainian logistics companies; Zhytomyr leads the way with LED lights and solar energy.

Small cities are even more results oriented; Voznesensk and Dolyna are showing great results in energy efficiency. Slavutych, with only 25,000 inhabitants, is moving toward energy democracy by creating the first municipal energy cooperation with the support of green energy NGOs like Greencubator and CEL.

From our side, we convinced our partners to reward forward-thinking mayors, not with financial benefits that might be hard to track in the city budget, but with useful “presents” for cities: energy audits, water supply equipment for kindergartens, co-creation sessions. For the first time, Ukrainian mayors are bringing something valuable back to the community from a conference, not just a personal reward.

There is a visible gap between innovations in European and other global cities and their Ukrainian counterparts. It seems easy for New York to invest in innovation, with its GDP of $850 billion. While Constantijn van Oranje, Prince of the Netherlands, presented the Dutch experience of creating a startup ecosystem and attracting talent at the summit last year, Ukrainian mayors are facing the problem of internal migration and brain drain to neighboring countries. Former New York Mayor Michael Bloomberg launched a contest called “Engaged Cities” aimed at identifying examples of cooperation between city government and citizens. Ukrainian cities could also participate, and the summit announced this opportunity last year. However, this collaborative style of problem solving is still embryonic in Ukraine.

To introduce a new way of doing things, the summit launched a campaign in Ukraine’s biggest cities, using billboards to advertise one simple sentence: What idea will change your city? As a result, we received dozens of proposed solutions from big and small cities. We selected three, and their authors presented their ideas to their mayors at the summit this year.

Being a mayor in Ukraine also means being a politician. The mayor of Lviv just declared that he is running for president. Some mayors become presidents, like Jacques Chirac, who was the mayor of Paris early in his political career. But it is important for those who are in the job to embrace the position and be a visionary, setting the ground for problem solving even after the term is over.

Marianne Borgen, mayor of Oslo—which will be the EU’s green capital in 2019—attended the third summit and said, “I know I will not be in office forever; therefore, during this period I want to do as much as I can—I just want to make a considerable impact in city development.” Hopefully this message will guide Ukrainian mayors, too.

Iryna Ozymok is a program manager at the Western NIS Enterprise Fund and is the founder of the International Mayors Summit.