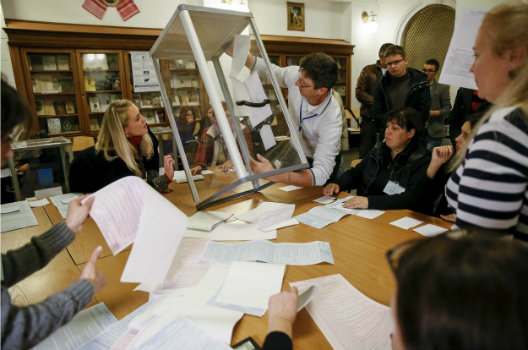 Western democracies are under threat from outside meddling, and Ukraine is the testing ground for this interference. Russian President Vladimir Putin’s persistent efforts to influence the domestic politics of his neighbors and countries well beyond Russia’s borders have posed enormous challenges in Europe and across the Atlantic.

From the fabricated “Lisa” case in Germany and the “loan” for Marine Le Pen in France, to the Russian security service hacks in the United States and the support for Catalan independence in Spain, Moscow has used a variety of means to prop up candidates and to weaken Western governments. The Russian Federation first tested many of these strategies and techniques in Ukraine.

More than any other country, Ukraine has been the unwanted recipient of Moscow’s attention, particularly during the past five years. The Kremlin has sought to place a pliable client in command in Kyiv and block Ukraine’s Euro-Atlantic aspirations, including by pressuring the previous Ukrainian leadership against signing. It has done so through its insistence that Ukraine walk away from the Deep and Comprehensive Free Trade Agreement with the European Union (EU). Putin interfered in Ukraine’s last elections in 2014, seized and illegally annexed Crimea by military action in 2014, and then launched a military campaign to stir destabilization in the Donbas.

Ukraine’s Presidential elections in 2019 and the subsequent parliamentary elections are crucial not only for Ukraine but also the West. Protecting Ukraine’s democracy against outside interference, from Russia or other actors, means also learning to protect Western democracies. It is likely that Moscow will intervene once again in the vote.

For the Kremlin, the perceived stakes are high. Putin may try to tilt the election in favor of a candidate whom he thinks might yield to Kremlin pressure, cutting a deal in the Donbas, relenting on Crimea, and moving toward a policy of accommodation. Accordingly, the Kremlin is very likely to continue, and even increase, its interference in Ukraine’s internal affairs, if not for the sake of a single candidate, then to widen existing fractures in Ukrainian society.

Russia may not be the only country to try influencing Ukraine’s elections. The past year has witnessed efforts by the government in Budapest to use the issue of Hungarian-minority language rights to put pressure on Ukraine in the EU and NATO. That government may also find the election a tempting opportunity, especially given the increasingly close ties between the Orbán government and the Kremlin.

The Kremlin is likely to use the full spectrum of its capabilities in the run-up to Ukraine’s election. This will start with its still-heavy “media” presence in the east and center of Ukraine and will not be limited to its state-run media. The Kremlin will push a variety of content on social media and find sympathetic outlets.

Moscow will also use its formidable cyber capabilities to hack into the campaign operations of candidates it does not like and to try to shut down major installations—including, but not limited to, electricity grids, phone networks, and airport control systems—in order to suggest that the authorities are not in control and to undermine the integrity of the electoral count. As it did in 2014, it may also try again to sabotage Ukraine’s election and voting system.

Moscow may also resort to more forceful measures. In 2015, it tried to orchestrate the emergence of the People’s Republics in Odesa and Bessarabia through the activation of its agents in the Ukrainian security services and in pro-Kremlin groups. Thanks to the timely work of Ukraine’s National Security Services (SBU), the effort was thwarted. Similar efforts to sow disorder cannot be ruled out in the months before the election.

There have additionally been a number of unexplained assassinations, of Ukrainian security officials, in Kyiv and other cities, who had operated successfully in the Donbas war. More of this is also to be expected. In the wake of the recent alleged poisoning in England of former Russian spy Sergei Skripal—and the alleged 2004 poisoning of Ukrainian presidential candidate Viktor Yushchenko—it is possible that Moscow may return to this deadly option as well.

The West must also reckon with the last major tool in Moscow’s hybrid war arsenal: the use of its military. This might involve the continued or additional concentration of major conventional forces on Ukraine’s border, or interference with Ukrainian shipping, particularly in the Sea of Azov. It might entail ratcheting up of additional firing across the line of contact in the Donbas or launching of a new offensive by the Russian proxy commanders.

The Task Force is creating a rapid-response team with the ability to monitor, evaluate, and disclose the full range of foreign subversive activities in Ukraine, and to propose suitable responses. The Task Force will bring together the best experts and instruments to spot, analyze, and substantiate attempted meddling. Using open- and closed-source research, the Task Force will gather and publish real-time information about how outside actors will try to influence Ukraine’s elections.

Alongside the Task Force, the Atlantic Council’s Digital Forensic Research Lab’s (DFRLab) active monitoring mission, under the direction of Graham Brookie, will provide its unique expertise to the Response Team’s efforts. Using innovative open-source research methodologies, they will provide real-time monitoring and analysis of the information environment in advance of and during the elections. This is a proven model that the Atlantic Council has developed over the last two years, including successful monitoring missions of elections in Brazil, France, Germany, Italy, Macedonia, Mexico, the United States, and beyond.

The upcoming elections in Ukraine are for Ukrainians to decide, not outside forces. Any efforts designed to influence and/or undermine the integrity of the elections would constitute an attack on Ukraine and would require a response from the international community. Such efforts must be exposed. Ukrainians deserve the right to choose their own leaders free of outside influence and interference, especially after having twice in a decade, in 2004 and again in 2013-14, demanded better from their leaders, the second time at significant cost.

By exposing Kremlin interference as it occurs in the run up to March 2019, the Atlantic Council and its partners hope to provide Ukrainians with the necessary tools to check outside efforts to influence their vote, to establish the facts, and to cast their ballots for a better future for Ukraine.

The Task Force will help Western democratic leaders gather support for protecting Ukraine’s democracy, and in turn gain experience for improving the resistance of their own democracies to outside interference.

This piece is the opening excerpt of an Atlantic Council Issue Brief: Ukrainian Election Task Force–Exposing Interference in Ukraine’s Election.

Image: A member of a local electoral commission empties a ballot box after a regional election at a polling station in Kyiv, Ukraine, October 25, 2015. (REUTERS/Gleb Garanich)