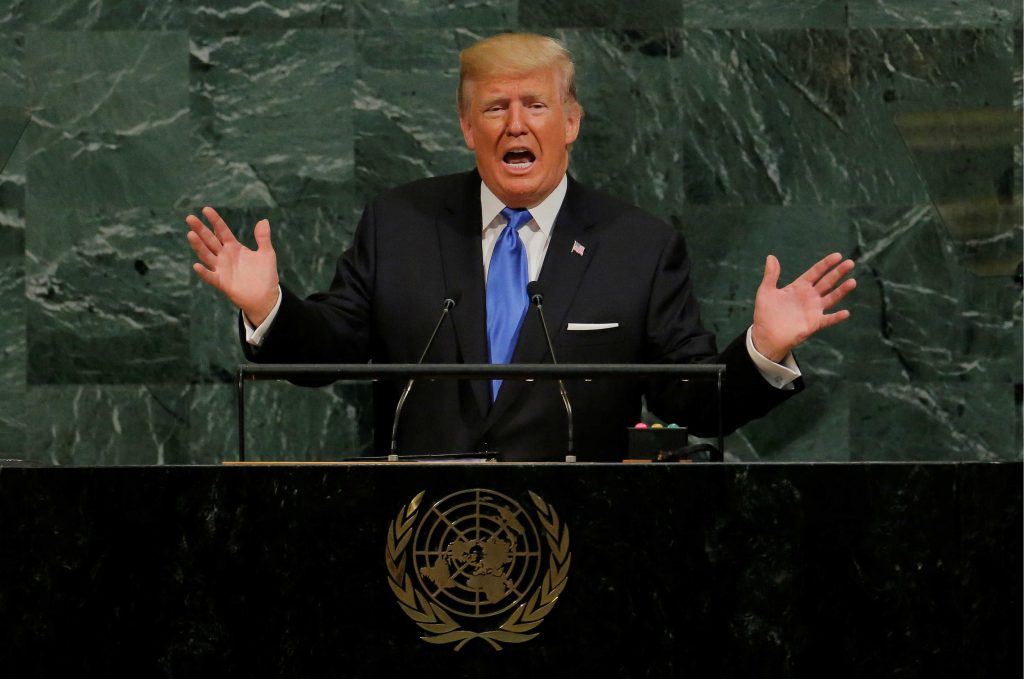 On July 25, the United States reaffirmed its rejection of Russia’s annexation of the Ukrainian peninsula of Crimea. In the Crimea Declaration, the United States recognizes that by annexing Crimea, Russia violated the fundamental principle of the United Nations Charter by using force against the territorial integrity and political independence of Ukraine, and calls on Russia to end its occupation of Crimea.

This strong restatement of support came on the heels of the Defense Department’s July 20 announcement that the United States will provide Ukraine with an additional $200 million in security cooperation funds to build the defensive capacity of the Ukrainian army, bringing the US total up to $1 billion.

Both announcements brought welcome relief after much worry arising from the Trump-Putin Helsinki summit earlier this month. However, despite their good intentions, neither are sufficient to bring an end to Russia’s multi-vectored war against Ukraine, now in its fifth year.

The United States should make use of the various international instruments available to enact a policy that will help force Russia out of Ukraine. The avenues to the restoration of Ukraine’s sovereignty and territorial integrity have not yet been exhausted.

Domestically, the United States should truthfully recognize that “the situation in Ukraine”—as the conflict is designated in presidential executive orders—is in fact an interstate war waged by Russia against Ukraine.

The United States should unequivocally recognize Russia as the aggressor state, and acknowledge Ukraine’s inalienable right to individual self-defense against aggression under Article 51 of the United Nations Charter.

Washington must tell Russia in no uncertain terms that if Moscow does not withdraw from all Ukrainian territory, it will face serious consequences. This recognition and demand are resoundingly absent from US and international documents, but their impact cannot be overstated. First, US recognition will trigger a cascading effect, much the same way the Crimea Declaration was supported and echoed by a series of successive governments. Second, it will give nations supporting Ukraine the moral and legal leverage to mount pressure on Russia in international organizations, and to step up international sanctions.

Currently, the US Congress is considering a number of resolutions, but they do not go far enough. Congress should pass a resolution to encourage the Trump administration to pursue a more vigorous policy to force Russia out of Ukraine. Such a document would have far-reaching international implications, and reinvigorate allies’ efforts in dealing with the Russian threat. We have taken the liberty of drafting a Congressional resolution which reflects the key points of such a policy (below).

Internationally, the United States can employ several tools. Although skeptics say international law is toothless, the United Nations remains a key forum for legitimate international action to push back against warring regimes, and it was successful UN action that repressed Iraq’s invasion of Kuwait. The UN has all the tools at its disposal to restore peace in Ukraine. What is needed is the courage to take a stronger stand on Russia’s violations of international law and use them.

The international community has been more than patient with the Kremlin. The West has tried diplomacy and a limited sanctions regime for four and a half years with scant success. Moscow remains defiant and shows no sign of halting its war on Ukraine.

The United States must make clear that it will no longer tolerate Russia’s aggression. President Vladimir Putin needs to be put in a situation where he has no choice but to end the war.

In September, the United States should propose a UN resolution demanding the immediate and unconditional withdrawal of Russian forces from all of Ukraine’s territory, including Crimea. The obvious obstacle is that as a permanent member, Russia will undoubtedly veto such a resolution in the UN Security Council. But there is a way around this problem. Under the UN’s “Uniting for Peace” resolution, if the UNSC, due to a lack of unanimity of the permanent members, fails to exercise its responsibility to maintain international peace, the General Assembly has the power to act and to organize peacekeeping operations. The United States should use all of its diplomatic leverage to make this happen.

If Russia refuses to comply with the UN General Assembly demand to withdraw from Ukraine, or if such a resolution proves impossible to achieve, the United States should authorize a new round of Russia sanctions, and lead the expansion of the international sanctions regime to include a complete financial and trade embargo for imports and exports, excluding medical supplies, food, and other items of humanitarian necessity.

If there are enough votes in the UNGA to support the resolution calling on Russia to withdraw from Ukraine, the United States should push even further and demand Russia’s suspension from the UN General Assembly.

Although Russia’s veto right on the UNSC gives it power to block any motion to suspend its membership in the UN, or to expel it from the organization under Articles 5 and 6 of the Charter, the precedent to suspend membership despite its UNSC veto was set in 1974 when the South African delegation was suspended from participation in the work of the General Assembly for crimes of apartheid for twenty-four years. Russia’s war crimes in Ukraine as well as the act of international terrorism by shooting down flight MH17 in 2014 should provide enough cause. The United States should lead on this issue.

If there is UNGA backing for a tougher position on Russia, a very restrictive global sanctions regime will become just a step away. Once in place, Russia will face truly damaging costs for its aggression that could finally reverse Kremlin’s behavior, if not by external international pressure, then by internal pressure from within Russia.

Clearly, there are efficient tools to stop Putin and restore the balance of power in favor of international law, but they require bold US leadership. An American-led international coalition of the willing can bring an end to Russia’s destructive ambitions in Ukraine and beyond, but only if the current policy is finally substituted for assertive enforcement of international law.

Declaration of Support for the Sovereignty and Territorial Integrity of Ukraine

The United States of America,

Guided by the purposes and principles of the Charter of the United Nations, Helsinki Final Act, the Memorandum on Security Assurances in connection with Ukraine’s accession to the Treaty on the Non-Proliferation of Nuclear Weapons, and other relevant international treaties and declarations,

Recognizing that the United Nations so far has failed to provide adequate aid to Ukraine to repress Russia’s aggression, or to remove Russia’s threat to peace by compelling Russia to halt its aggression against Ukraine and repair the consequences of its illegal actions,

Recognizing that UN Security Council action is impaired by the Russian Federation, which abuses its privileges as a permanent member to shield itself from responsibility for its violations of international law,

Deploring Russia’s ongoing use of force against the territorial integrity and political independence of Ukraine that took the lives of thousands of Ukrainians and resulted in the occupation of vast territory, causing damage to infrastructure, economy, and environment,

Deploring Russia’s threat to use weapons of mass destruction to invade a peaceful neighboring state, which undermines Russia’s obligations as part of the international nuclear non-proliferation regime,

Condemning Russia’s obstruction of UN Security Council Resolution 2202 (2015) and the unceasing violation of its commitments related to the “Package of Measures for the Implementation of the Minsk Agreements,” which have undermined the peace process,

Condemning Russia’s continued violence in the Donbas region of Ukraine, as well as its failure to comply with the obligation to withdraw its forces from Ukraine’s territory,

Condemning Russia’s responsibility for shooting down the civilian passenger flight MH17 in Ukraine’s airspace, as well as a number of other attacks on civilians in Ukraine,

Condemning grave violations, abuses, measures, and practices of discrimination against the residents of the temporarily occupied Crimea and Donbas regions by the Russian occupation authorities,

Reaffirming the United States’ policy to lead and seek multilaterally coordinated efforts with other countries to ensure that the security of non-nuclear countries that have committed to the international non-proliferation regime are not threatened by nuclear states,

Reaffirming the United States’ commitment under the Budapest Memorandum on Security Assurances to provide assistance to Ukraine as a victim of an act of aggression by seeking action in the UN to restore peace and security in the country,

Reaffirming the non-recognition of Russia’s illegal occupation and annexation of the Autonomous Republic of Crimea and the city of Sevastopol,

Affirming Ukraine’s inherent right of individual and collective self-defense, in response to the unprovoked armed attack by the Russian Federation, in accordance with Article 51 of the United Nations Charter.

Supporting the commitment by Ukraine to adhere to international law in its efforts to put an end to Russian aggression, occupation, and illegal annexation,

Supporting the 2015 Resolution by Ukraine’s parliament appealing to the United Nations and the national parliaments of world’s nations to recognize Russia as an aggressor state,

Striving to establish conditions under which justice and respect for the fundamental principles of the UN charter can be maintained,

1. Recognizes Russia as an aggressor state responsible for an armed attack, occupation, and illegal annexation.

2. Demands that Russia unconditionally ceases all forms of aggression, immediately withdraws all of its forces from Ukraine’s territory, ends its occupation, and rescinds the annexation of Crimea.

4. Calls upon the members of the United Nations to provide material, financial, and military assistance to the government of Ukraine to help it repel Russian aggression.

5. Calls upon the members of the United Nations to prevent any activities by their nationals or in their territories which would promote or are calculated to undermine Ukraine’s sovereignty and territorial integrity.

6. Calls on Russia to enter direct talks with the government of Ukraine in good faith to bring about the peaceful settlement to Russian aggression.

7. Calls on other signatories of the Budapest Memorandum, the governments of the United Kingdom, France, and China, to mediate and observe such negotiations.

Roman Sohn is a legal expert, columnist, and civil society activist. Ariana Gic is an independent political and legal analyst, and columnist.