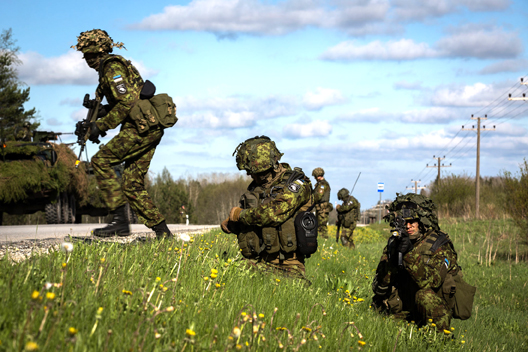 Since the Kremlin’s invasion of Ukraine, the world has seen precious little Western leadership when it comes to confronting Russian President Vladimir Putin—despite US and European Union sanctions, recent efforts to strengthen NATO’s conventional deterrence in Europe, and the first signs of increased defense spending in Europe.

Even in the face of plans to send Poland heavy weapons in 2016 while beefing up Baltic defenses and organizing more frequent and larger NATO exercises, the fact remains that Russia—if it chose to do so—could occupy the Baltic states in two days, as Gen. Peter Pavel, the incoming chairman of NATO’s Defense Committee, recently warned.

In other words, NATO’s conventional deterrent is still dramatically insufficient.

Concurring with this assessment, US Army officials concede that Russia has fortified its Baltic Sea and Black Sea defenses with anti-access and area denial capabilities so well that NATO would suffer enormous casualties if it had to fight its way in. And even if it ultimately prevailed, this would clearly be a long and bloody war.

It’s also clear that the Pentagon’s ability to understand Russia’s overall trajectory and defense strategy is woefully under-resourced. Both US and British intelligence and analysis capabilities have a long way to go, and they are probably not alone in this defect.

Baltic governments may feel reassured by Western announcements to date, but the people themselves do not; in one opinion survey, for example, Estonians said they felt abandoned rather than reassured. Furthermore, in 1994, the US and British governments signed an agreement with Ukraine to protect its security and inviolability, a pact we abandoned the minute it was challenged. That encouraged Putin to believe he could invade Ukraine with impunity; even Russian media outlets expect a new offensive soon. This is clearly not leadership—whether from the front, behind, or anywhere else.

The Obama administration, which dismisses all criticism, doesn’t seem to realize that—as Michael Howard wrote in 1982—the main objective of US forces in Europe is to deter and to reassure. Yet there’s not enough evidence of either deterrence or reassurance, especially since the escalation of violence in Ukraine since early August.

The White House may be committed to NATO’s coherence and integrity, but along with Germany and France it continues to pressure Kyiv to adhere to the Minsk II accord that Russia broke before the ink was dry, giving Moscow’s clients in the Donbas limited political autonomy. This is tantamount to assisted suicide for Ukraine, and bowing to that pressure could trigger anti-regime violence in Kyiv, only intensifying the crisis further.

Therefore here is an agenda—or at least the outline of one—for President Obama and whoever succeeds him in 2017, so that Washington can defend its interests in Europe. The belief that Putin can simply escalate his war at will if we give Ukraine weapons has no basis, since Russia is intensifying the war even without such assistance. But Putin also faces increasingly visible military and economic constraints. The US and its allies must not only give the Ukrainian Army weapons but also train and reform its command staff so it can better fight and mobilize the public in self-defense. Putin may regard this as a provocation, but he regards whatever we do as either provocation or a sign of weakness.

It’s also just as urgent to totally upgrade NATO’s air, land, sea, and cyber components. Before its July 2016 summit in Warsaw, NATO must formulate a credible and not merely declaratory nuclear strategy to counter Putin’s threats. Another reason for building a genuine conventional deterrent and devising a credible nuclear strategy is to make sure neither side goes nuclear early in a crisis. After all, the point of deterrence is to deter.

Fourth, the US and NATO must invest in enhanced intelligence collection and analysis on Russia and fifth, the West must improve its expertise on the region, and not allow it to be dominated, as it is now, by students of Russian language and literature. Indeed, the absence of experts on Russia’s military can only lead us into new and fresh disasters.

Sixth, we must accept that the threat of war in Europe is not just conceivable, but real. That means boosting defense spending in order to provide Europe a credible deterrence. The President must make the case, before Congress and the American public, that Russia represents the greatest threat to US security today. What this really means is that the White House must reverse the process by which it has neglected alliance management until there was a crisis. Alliance management is not just something we do when the guns are roaring; it must occur daily before the blast of war is in our ears.

Unfortunately, President Obama has not learned this lesson. He and his top policymakers simply do not take the Russian threat seriously—and the idea that we can somehow elicit Moscow’s cooperation in the Middle East while Putin himself stokes the fires of war by allowing Russian terrorists to travel from Russia to Syria, is incredible. How, ultimately, can we be partners with a revanchist and terrorist-sponsoring state whose mantra is new rules or no rules?

Stephen Blank is a Senior Fellow with the Washington-based American Foreign Policy Council.