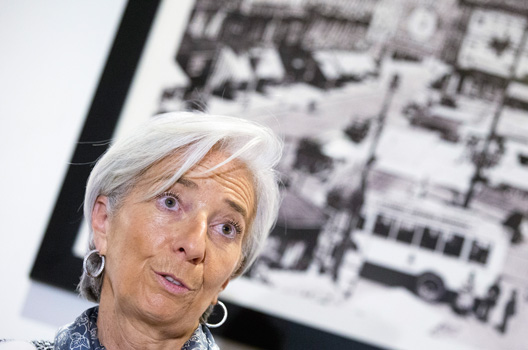 An International Monetary Fund bailout for Ukraine underestimates the banking sector’s needs and is unrealistic about government expenditure on security and defense, according to Andrei Kirilenko, a Professor at the Massachusetts Institute of Technology.

Ukraine has secured a $40 billion bailout from the IMF and other creditors. The agreement, which spans four years and includes $17.5 billion from the Fund, “can represent a turning point for Ukraine,” said IMF Managing Director Christine Lagarde.

Kirilenko, a Professor of the Practice of Finance at MIT’s Sloan School of Management, said the package is not designed to “stimulate sustainable economic growth,” but to “close a bleeding wound in the underbelly of Europe.”

The package is more realistic than the one it replaces, but it still “severely underestimates” the needs of the banking sector, which requires “probably about five times this much money,” said Kirilenko. Other prominent voices—including financier George Soros and Standard Bank senior economist Tim Ash—have said in recent months that the West has been consistently underestimating Ukraine’s needs.

The Cost of War

“The other area where the program is completely unrealistic is the amount of government expenditure allocated to security and defense, which includes financing of the army, national guard, border guards, and the police and security apparatus,” he added.  Kirlenko, who was born in Ukraine, served for 12 years on the IMF staff and before joining MIT was chief economist at a U.S. regulatory agency, the Commodity Futures Trading Commission.

The Ukrainian government’s current priorities are national defense, which requires financial mobilization, and public legitimacy, Ukraine’s Finance Minister Natalie Jaresko said in a conference call with the Atlantic Council on February 3. She said the war was then costing Ukraine $5 million to $10 million per day.

The war with Russian-backed separatists in Ukraine’s industrial east has taken a significant toll on the country’s economy. Ukraine’s central bank was forced to institute new currency controls to slow the free fall of the currency, the hryvnia.

The IMF has tied its loan package to the Ukrainian government undertaking meaningful reforms.

“The program will require the authorities’ steadfast determination to reform the economy,” said Lagarde.

Some foreign donors have been skeptical of the Ukrainian government’s commitment on this front, especially when it comes to rooting out corruption.

“As evidenced by the very forceful passage of the government budget, the government is currently able to get pretty much whatever it wants from the Parliament,” said Kirilenko.

“The question is, once the laws are voted on as required by the IMF would they be translated into regulations, policies, and procedures to make the reform effort self-sustaining? Very unlikely,” he added.

Kirilenko shared his thoughts in an e-mail interview with the New Atlanticist’s Ashish Kumar Sen. Excerpts below:

Q: How realistic is the IMF’s proposed $17.5 billion program for Ukraine? What are its strengths and weaknesses?

Kirilenko: At least for 2015, the new Extended Fund Facility (EFF) program is much more realistic than the hastily put together standby program that it replaced. The new program is much more realistic in four areas: it is spot on in identifying the severity of economic contraction in the real economy (Ukraine’s GDP growth is set at negative 5.5 percent in 2015) accompanied by accelerating inflation (prices are forecast to grow about 30 percent in 2015); improving the current account balance due to the weakening of the hryvnia; the size of government deficit (-4.2 percent of GDP); and the deficit of the state gas monopoly Naftogaz (somewhat less believable, but plausible -3.1 percent of GDP).

The program is very weak in two areas. It severely underestimates banking sector bailout needs: the funds programmed to flow from the central bank to the banking system are set at about 2.6 percent of GDP in 2015. Given its massive internal problems, as evidenced by the fact that forty percent to sixty percent of the banks’ loans are deemed to be non-performing, this number is way off. Probably about five times this much money should be allocated to this effort in 2015 alone.

The other area where the program is completely unrealistic is the amount of government expenditure allocated to security and defense, which includes financing of the army, national guard, border guards, and the police and security apparatus. Under the budget that was agreed upon with the IMF mission, all of this combined will get 82 billion hryvnia or 4.4 percent of the shrinking GDP. That’s about $3.8 billion – really not enough for a country that’s fighting for its territorial integrity. Ukraine would need to spend at least $3 billion more on the war effort.

Q: Would the plunge of the hryvnia followed by the tightening of capital controls by the National Bank of Ukraine complicate relations with the IMF?

Kirilenko:  In just one year, the hryvnia went from eight per dollar to about thirty per dollar. This was due, in large part, to the accelerating loss of confidence in the government’s ability to reform the economy and stomp out corruption. The negative expectations trap has been crippling the currency and the rest of the economy since last August. The damage that’s being sustained is quite long-lasting and would take years to undo as money is being taken out of the domestic financial system, investment projects are being abandoned, and credit obligations are not being fulfilled. With such low trust in the ability of the authorities to manage the economy, the negative expectations trap could easily translate into a run on the currency or a run on the banking system. Perhaps the continuing decline in the hryvnia is a warning sign about much bigger problems on the horizon.

The negative expectations trap is very hard to get out of and the IMF knows quite well about it. It is impossible to get out of a negative expectations trap with moderate efforts. A country needs to really jump out of it. Something really big needs to be done to stabilize and then improve confidence. It could be a solid military victory or a bold bank restructuring move or dramatic efforts to improve energy independence or a big donor package. The IMF program and additional funds from the international financial institutions signal that the international community is willing to do its part.

Q: Will the government in Kyiv be able to pass the required preconditions for IMF financing through Parliament?

Kirilenko: Yes, as evidenced by the very forceful passage of the government budget, the government is currently able to get pretty much whatever it wants from the Parliament. The question is, once the laws are voted on as required by the IMF, would they be translated into regulations, policies, and procedures to make the reform effort self-sustaining? Very unlikely. Government agencies remained “privatized” to serve the interests of the leading business-political groups. The capacity to govern on the part of the leading local groups remains very low.

Q: Will the IMF package be sufficient to spur growth in Ukraine’s economy?

Kirilenko: The IMF program, accompanied by the broader international donor effort, might be sufficient to stabilize Ukraine’s economy so it no longer contributes significant risks to the international financial stability. The package is designed to close a bleeding wound in the underbelly of Europe. It is not designed to stimulate sustainable economic growth.

The best way to see this is by looking at how much money under the program is envisioned as credit from the domestic banking system to the private sector, the latter being the place where economic growth comes from. Before plentiful credit could flow from the banks to the economy, the domestic banking system would need to be cleaned up of its old, crippling obligations and recapitalized by the government and the central bank. However, it looks like the IMF program does not envision anything remotely adequate with respect to the rebuilding of the domestic banking sector. This means domestic banks will remain preoccupied with their own survival for years to come rather than what really need to be doing — financing new business projects that lead to sustainable economic growth. Under the program, credit from the banking system to the economy is set at very low levels starting with single digits in percent of GDP in 2015. To get the economy out of the deep recession that it’s currently in and onto a sustainable growth path, credit to the private sector should be an order of magnitude higher.

This, however, could be fixed. After the government is able to credibly meet the program’s performance criteria, it could ask for the program to be adjusted to actually support economic growth, not just bandaging a bleeding wound.

Q: One of the Ukrainian government’s current priorities is national defense, which requires financial mobilization. How can this priority be achieved?

Kirilenko: I suggest that the Parliament enables the creation of a national defense fund — an off-budget financing vehicle to raise and spend funds on the much-needed defense efforts. The reason for having it off budget is so it does not conflict with the proposed IMF program. To finance defense efforts, the fund should be allowed to issue war bonds and attract contributions (including in kind) from foreign governments, as well as foreign and domestic companies, foundations, and individuals. It should be distinctly more transparent, credible, and effective compared to any existing government body (which is a very low bar), yet be of comparable size, say $3 billion per year in defense spending. With a bit of simple financial engineering (I am an MIT finance professor after all), a lot more funds could flow to the much-needed defense efforts.