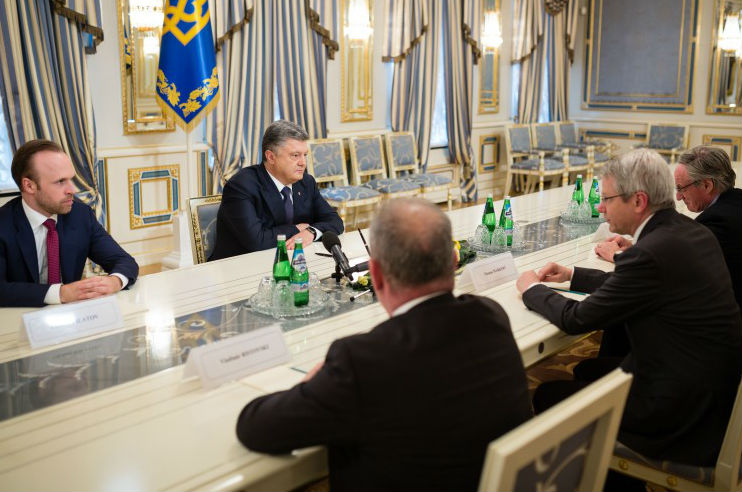 As conflict flares up on Ukraine’s eastern front, a different campaign rages in the conference rooms of Kyiv. The administration of President Petro Poroshenko is overhauling the Ukrainian state, amending everything from the constitution to the tax code. The most important reform may be the creation of an independent judiciary. As Anders Åslund pointed out this summer, there is a “nearly unanimous popular viewpoint” in Ukraine that the country’s 10,279 judges and 20,367 prosecutors are “all corrupt.” The Democratic Initiatives Fund, a nonprofit Ukrainian think tank, found in a public poll last December that more than 80 percent of respondents did not trust the judiciary, believing that judges are dependent on politicians and oligarchs. Nearly 94 percent said that corruption is widespread among judges.

Poroshenko is heeding the call for court reform. On March 3, he convened a constitutional commission to restructure the Ukrainian state. He gave the commission three tasks: designing an approach to decentralization, rethinking the country’s human rights policy, and recalibrating the checks and balances between the judiciary and the other branches of government. In September, the commission submitted its latest draft of the judicial amendments.

The commission’s previous draft received less than stellar reviews from observers in and outside of Ukraine. The Ukrainian civic organization Reanimation Package of Reforms argued that the legislation ignores important vulnerabilities in the structure of the court system and fails to provide judges with adequate independence. The Venice Commission expressed concern that the President would play too great a role in appointing judges and other key officials. Fortunately the latest draft of the amendments corrects many of these problems.

Importantly the reforms eliminate the mandatory five-year probationary period for young judges. Under the current constitutional system, the Rada appoints judges for five years before deciding whether to fire them or grant them tenure, making young judges politically beholden to the legislature. Under the new system, an independent body called the High Council of Justice (HCJ) nominates and the President approves the hiring of new judges, who immediately have lifelong tenure, and—other issues notwithstanding—independence.

The new amendments also clarify the approval process of new judges. The language of the previous amendments suggested that both HCJ and the President would separately approve them. The legislation did not specify how, if at all, the two bodies would coordinate their decisions. It left open the possibility of a confusing two-track hiring system, which would have been vulnerable to political abuse and corruption. The recent amendments correct this problem, placing stronger checks on the presidency.

As the gatekeeper to the court system, the HCJ should play a crucial role in ensuring judicial independence. It is essential that no single political entity gain disproportionate control of the HJC. Previous drafts of the amendment raised eyebrows by giving the President but not the Verkhovna Rada a say over appointments to the HCJ. The latest amendments correct this flaw by giving the legislature and President three appointments each. The remaining eighteen seats are reserved for various professional organizations representing judges, prosecutors, attorneys, and law schools. While some organizations wish to see political appointments completely removed from the HCJ, there is no denying that the newly proposed system is a step forward.

Weaknesses remain in the proposed system that would leave judges vulnerable to external pressures. First, the President retains the right to transfer judges from court to court, which gives him the power to punish and reward judges. Second, the proposed law leaves judges vulnerable to unfair dismissal. Article 126 of the proposed amendments empowers the HCJ to dismiss a judge for the “commission of a disciplinary offense.” Even a minor legal infraction could cost a judge his or her job. The law should state that only severe disciplinary offenses, such as a felony, are grounds for dismissal.

Previous proposals to fix the judiciary were quick to block the influence of the Verkhovna Rada. They were much slower in putting checks on the presidency. However, in this last round of revisions, the constitutional commission has clearly aimed to equally constrain both branches of government. Secretary General of the Council of Europe Thorbjorn Jagland called the amendments “an important step in Ukraine’s reform process” and urged parliament to adopt them. That’s good advice. Ultimately the amendments suggest that Poroshenko is serious about limiting the powers of the presidency and, moreover, about reform.

Joshua Solomon is an intern in the Atlantic Council’s Dinu Patriciu Eurasia Center.