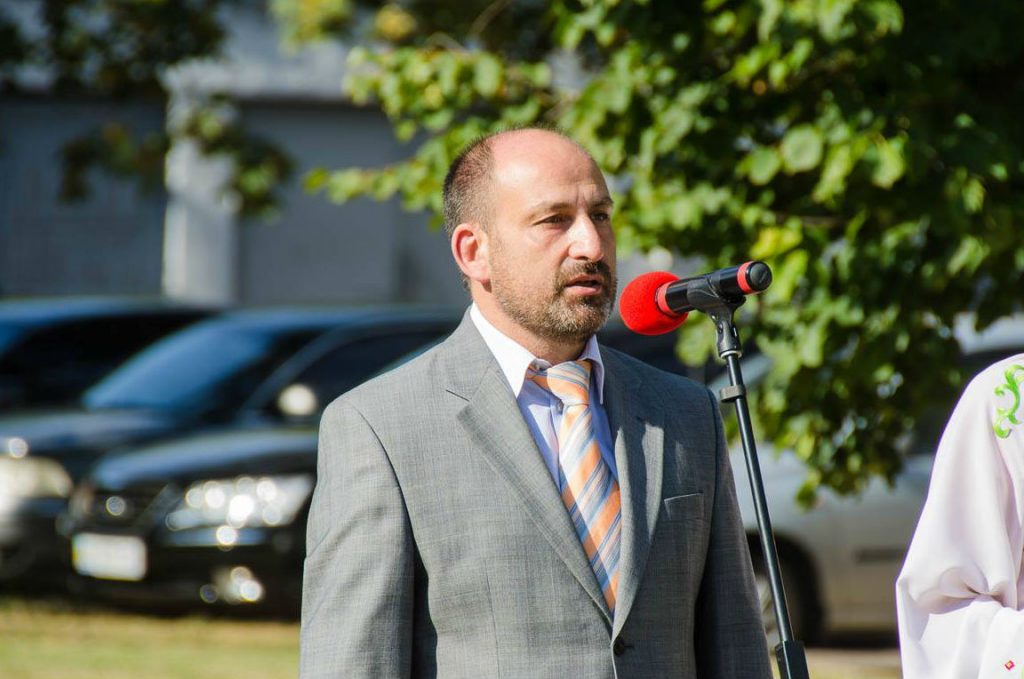 While Russia’s hybrid war in the Donbas drags on, Ukraine is turning its attention to improving the lives of the region’s people. A key part of this effort is rebuilding the infrastructure in those areas that remain under Kyiv’s control. Kyiv has allocated $150 million to begin rebuilding schools and hospitals, but this is a drop in the bucket. Rebuilding the Donbas will cost billions; estimates range from $1.5 to $15 billion, and some economists say that no one really knows how much it will cost. Much of this eventual reconstruction money will flow through the Donetsk Oblast State Administration, which is currently headquartered in Kramatorsk.

Evgeniy Vilinsky, first deputy head at the Donetsk Oblast State Administration, is responsible for managing the oblast’s reconstruction funds. He spoke with UkraineAlert about his vision for reconstruction and how Ukraine might avoid corruption in the procurement process as the region is rebuilt. He argued that all reconstruction procurements should be outsourced to an independent body that is free from government control.

Q. What is your background?

A. I have a background working for international consulting firms [Editor’s note: Vilinsky has worked for Bain & Company and Booz Allen Hamilton] as well as the Ukrainian government, and shortly after the Euromaidan I accepted a position as first deputy head at the Donetsk Oblast State Administration.

A. We have approximately $150 million allocated by Kyiv, and $108.5 million from international donors—the majority of which comes from the European Investment Bank. So a total of $258.5 million.

Q. Will other government agencies be involved in managing and spending this reconstruction money?

A. The Donetsk Oblast administration will manage most of this money, with the exception of $10.6 million allocated to the Ministry of Regions. In addition, the newly established Ministry of Temporarily Occupied Territories wants to take control of all reconstruction money, but so far they have not been able to.

Q. What types of reconstruction projects are planned?

A. Much of the infrastructure in our oblast lies in ruins. We need to rebuild everything—schools, hospitals, water and sewage, bridges, roads, and of course housing. Right now, we are looking at over 500 separate projects.

Q. Beyond this initial $258.5 million, do you anticipate receiving any additional money?

A. This initial allocation is just a start. We are hoping to eventually receive billions of dollars from international donors. For this, though, we must demonstrate that we can spend this money cleanly—without corruption, theft, and mismanagement. Each one of these projects would naturally require its own tender, and of course not every government tender in Ukraine is guaranteed to be clean.

Q. Speaking of corruption, where do you see the biggest risks coming from?

A. First, let me say that I and my colleague here in the oblast administration, Governor Pavlo Zhebrivskyi, are committed to running all procurement in a totally corruption-free manner. However, our success is not guaranteed, and I can outline four possible forces that may try to influence the procurement process.

Local Corruption: The problem is that within the local governments, including the oblast administration, rayon [district] administrations, municipalities, and local representative offices of state authorities, many of the mid-level staff are vulnerable to corruption. It is a combination of personal integrity [issues] as well as the fact that they receive a very low level of pay that has led them to be involved potentially in corruption schemes. When the previous oblast administration was based in Donetsk before the war, corruption schemes were common, and some of these may have been brought over here to Kramatorsk. Our oblast administration has increased salaries for its staff significantly, but the situation can’t be changed in a moment.

Parliament: Members of parliament, especially former Party of Regions MPs, are operating in the same kleptocratic way that they have before the Euromaidan. Also, the former political-economic elites are very much in place and up to the same things. And a lot of laws, even new ones, contain “holes” which can be used for corruption.

Security Agencies: The security agencies can also be activly involved in many “schemes,” and use their powers related to economic oversight to manipulate procurement (for example, to promote ‘their’ firms and extort from companies).

Due to these risks, I believe that responsibility for all reconstruction procurements should be outsourced to an independent body that is free from government control. Actually, the UN and World Bank agree with me on this point and are willing to help. For this, they propose to create a Multi-Partner Trust Fund (MPFT), which would be an independent body that would manage the procurement tenders. I was involved in working with the UN to prepare all documents to create the MPFT, but when we shared the documents with the Kyiv, the head of Ministry of Temporary Occupied Territories, Vadym Chernysh, blocked this process. So right now, we cannot move forward with MPFT.

Q. How do you anticipate actually managing and spending the money—i.e., how will the tenders be run? Will the tenders go through the online procurement process ProZorro?

A. For sure everything will go through ProZorro. In fact, Donetsk region was the first pilot region for ProZorro system implementation. We even lobbied for the relevant changes to the law “On public procurements.” Currently, I am proud to say that we are the number two user of ProZorro, behind only Kyiv itself.
But as helpful as ProZorro is, it’s not a panacea because the key issues in the procurement process are tender documentations and conditions. If someone can put the specific conditions into the tender documentation, you [can] have an impact on tender results. Therefore, to avoid corruption you have to control all procurement documents. That’s why we want an independent body to manage all reconstruction procurements.

We are [also] inviting experts from the UN, Kyiv School of Economics, and anticorruption activists to help us. It would also be extremely useful if Western embassies in Ukraine would provide us with support as well.

Q. Are you worried that reconstruction money could end up leaking to the rebel-held territories?

A. This is surely a concern as well. Of course, so-called DNR or LNR companies cannot participate in our tenders. However, the threat is if the final beneficiaries of the tender are DNR/LNR supporters or Russian residents, and if they will transfer their money abroad through offshore companies. This is another risk that could be reduced only by having an independent, nongovernment entity manage reconstruction funds.