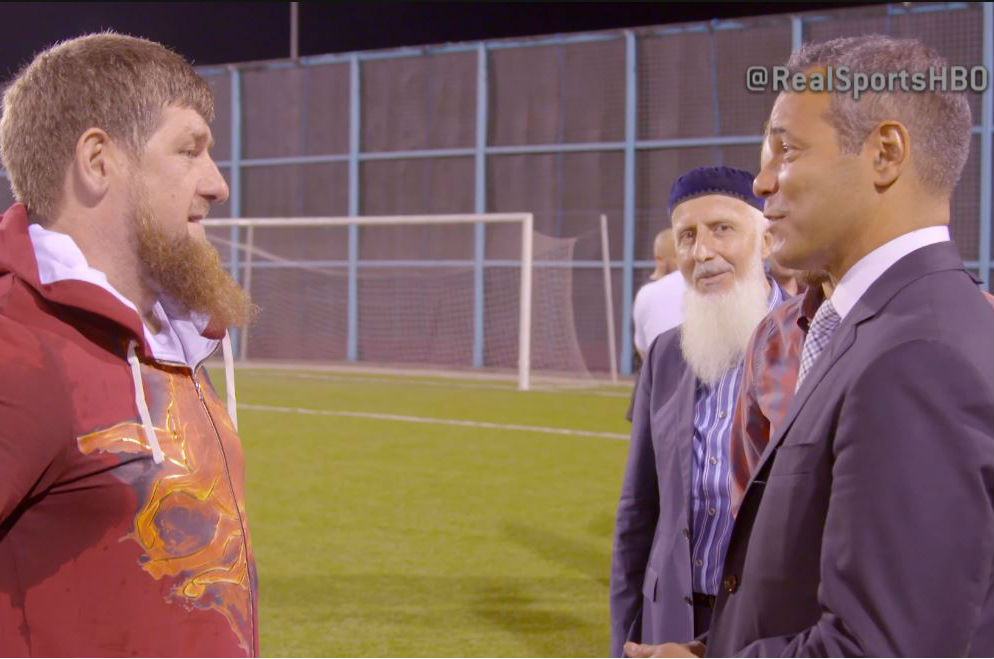 The July 18 episode of HBO’s “Real Sports” features a surprising interview subject—Ramzan Kadyrov, the head of Russia’s Chechen Republic, in his first interview with a Western journalist since 2014.

While the interview’s main theme is Kadyrov’s use of mixed martial arts as a political instrument, an excerpt released before the episode aired focused on the main topic putting Chechnya in the international spotlight: reports of brutal government abuses against gay people in the region.

Kadyrov’s responses were predictable. “We don’t have any gays,” he told HBO in the excerpt. “And if there are some…take them far from us so we don’t have them at home. To purify our blood, if there are any here, take them.” As outrageous as Kadyrov’s responses are, they are not surprising. But international attention to this issue has produced one remarkable development: the Russian government appears to be dropping the pretense that it holds any sovereignty over Kadyrov and Chechnya.

This was clear at a June 5 press conference held by Maria Zakharova, spokeswoman for Russia’s Ministry of Foreign Affairs. Finnish journalist Erkka Mikkonen asked her to comment on reports of state-backed anti-gay violence in Chechnya. Mikkonen was referring to reports by Novaya Gazeta, Russia’s leading independent newspaper, and international human rights organizations such as Human Rights Watch that have documented a violent campaign by the region’s security services over the last several months. Over a hundred actual or suspected gay men have been kidnapped, tortured, and murdered.

Zakharova chided Mikkonen for his interest in the topic, implied that there are no gay people in Chechnya, sarcastically offered to arrange a trip for the journalist to investigate the situation himself, and punctuated her remarks with a wink as she walked away from the podium. Zakharova’s response was remarkable not for her cynical churlishness, attempts to deflect from the issue, or apathy toward the reported violence; all of these are common reactions for Russian government officials confronted with inconvenient information. What stands out about her remarks was her implicit acknowledgment that Russia’s federal government does not exercise effective control over Chechnya.

A spirited international advocacy effort has turned the situation of Chechnya’s LGBT population into a sore spot for the Russian government. Global condemnation has become focused on the issue of anti-gay violence in the region, including sharp statements from German Chancellor Angela Merkel and French President Emmanuel Macron during recent joint events with President Vladimir Putin. However, while it is critical that global voices highlight this crisis, the issue’s sudden prominence is ironic given that abduction, torture, and extrajudicial execution have been regular facts of life for all residents of Chechnya during the Putin era. The violence committed by state actors against Chechnya’s gay population is neither a new phenomenon nor one to which gay people are uniquely vulnerable.

In the late 1990s, Putin famously secured his rise to the presidency by instigating renewed military hostilities with the semi-autonomous Republic of Chechnya, thereby mobilizing the Russian public. During his first term, he “resolved” the conflict by appointing the former insurgent warlord Akhmad Kadyrov to rule the region, then replacing Akhmad with his son Ramzan following the former’s assassination in 2004. The terms of the bargain between Russia’s federal government and Chechnya’s regional elites are clear: Ramzan and his loyalists receive total impunity to enforce control over Chechnya with unchecked violence against its residents, alongside massive transfers of federal funds to the republic’s budget for Kadyrov to disburse as he sees fit.

In return, Kadyrov offers Putin frequent and ostentatious proclamations of loyalty that maintain the illusion of Russian sovereignty over Chechnya for domestic audiences. The main avenue in Chechnya’s capital city of Grozny has been renamed “Putin Prospect,” and the Russian president’s portrait features prominently in government offices and public spaces. Putin has justified his increasingly authoritarian regime by contrasting it with Russia’s chaotic circumstances during the 1990s, and the return of Chechnya as a “loyal” Russian subject is one of the fundamental elements in the regime’s claims to legitimacy.

In reality, however, the situation is more fraught. Kadyrov’s showy displays of fealty to Putin emphasize that the political dynamic is defined by the two men’s personal relationship, rather than by Chechnya’s legal status under Russia’s constitution. Kadyrov regularly lays down markers of his effective independence. His widely popular Instagram account has featured videos showing him addressing thousands of armed troops, implying that this force is a personal army loyal only to him. He has repeatedly issued statements flouting Russian federal law in favor of his own version of traditional Chechen positions on issues such as polygamy. He has also publicly urged Chechen security services to treat federal law enforcement officers as invading forces to be repelled with deadly force.

This is what makes Zakharova’s remarks to Mikkonen so extraordinary. With her derisive recommendation that Mikkonen travel to Chechnya to investigate himself and knowing wink, Zakharova went well beyond letting Mikkonen know that she is uninterested in reports of gross human rights violations. Her comments acknowledge that the Russian government is not only powerless to secure the wellbeing of its own citizens living in Chechnya, but is also unable to safeguard even visiting foreign journalists. That a prominent representative of the Russian government would treat this state of affairs as cause to smugly taunt a journalist rather than to express regret is a useful illustration of the Russian government’s attitude toward any attempts to hold it accountable for its actions.

Dylan Myles-Primakoff is Senior Program Officer for Russia at the National Endowment for Democracy.