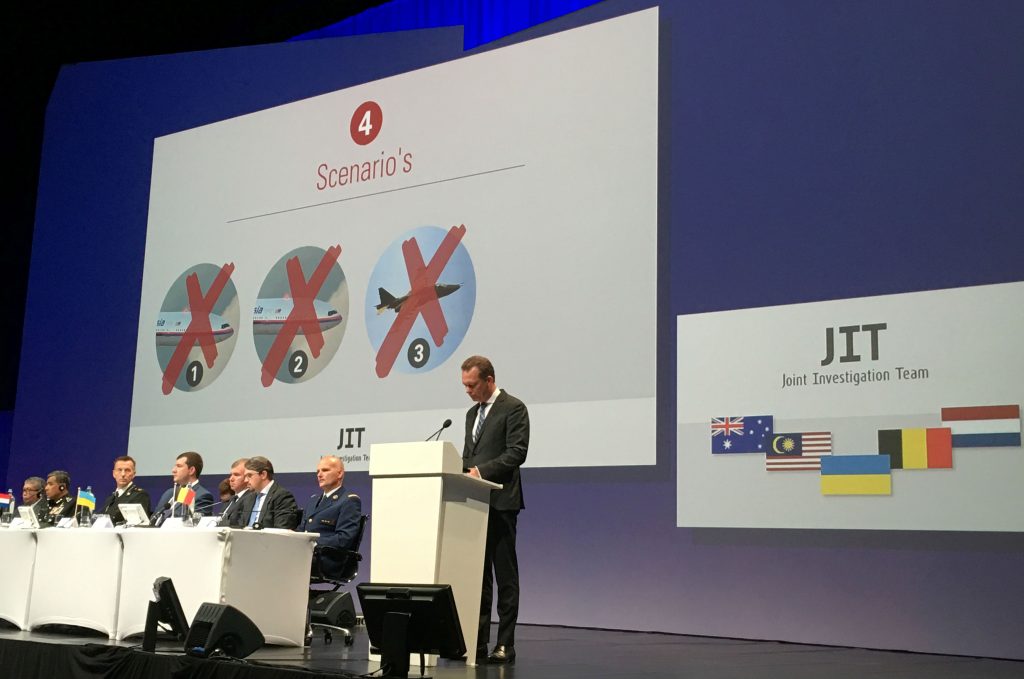 The report of the Dutch-led investigation team on the shoot down of Malaysian Airlines Flight 17 over eastern Ukraine offered a momentary glimpse into the true nature of the proverbial riddle wrapped in a mystery inside an enigma. Instead of denying any Russian involvement in the death of 298 people in July 2014, a number of official spokespersons, journalists, and bloggers known for their close ties to the Kremlin reacted nervously and with contradictory responses.

Dismissing the report as based on “speculation, unqualified and unprofessional information,” Russian presidential spokesman Dmitry Peskov hinted vaguely that new data on the crash had emerged. A representative of Almaz-Antey, the company that produces the Buk missile (the model that destroyed the Malaysian Boeing), did not rule out an accidental launch caused by poor maintenance and a possible violation of procedures by the missile launch crew. A permanent fixture in the presidential press corps, Andrei Kolesnikov, indicated that Russian President Vladimir Putin could have been misled by his advisers, speculating that if Putin finds out that pro-Russian separatists in the Donbas deliberately shot down a civilian airliner, he will turn his back on them. And the chief editor of the influential Echo Moskvy radio station, Alexei Venediktov, said something similar, though he presumed that Putin would thoroughly investigate Russian military involvement in this tragedy. The first to notice this increased nervousness was Andrei Illarionov, who provided more than a dozen examples on his blog.

This unusual variety of perspectives on such a crucial issue betrays fear in Moscow’s official circles. Before the report, Kremlin propaganda denied not only Russian or separatist involvement in the tragedy, but even refused to admit that the Boeing was shot down by a Russian-made missile. With a straight face, pro-Kremlin media quoted non-existent Spanish air traffic controller Carlos, Ukrainian Air Force Captain Voloshin, and other fakes, though none of the numerous explanations Moscow offered could hold water. Why would Peskov be so hesitant to deny Russian involvement now, while Almaz-Antey, Kolesnikov, Venediktov, and many others dared to spell out what had been anathema for Kremlin only days before? Putin and his cohorts have been caught red-handed in willful mendacity on many previous occasions and the Russian regime has invariably maintained its collective poker face. No one seriously expects the Russian government to extradite the accused perpetrators to the West. What caused such an uncoordinated response this time?

The international investigative team indicated that about a hundred individuals were “linked to the crash or to the transport of the Buk” missile, though the investigators have yet to determine who could be held criminally responsible. There is a chance that some of them belong to Russia’s top leadership, perhaps all the way up to Putin himself. We know what happened to the Libyan leader Muammar Gaddafi after he was implicated in the 1988 bombing of Pan Am Flight 103, which blew up over Lockerbie, Scotland. Gaddafi became an international pariah, banned from visiting all Western capitals other than New York during UN General Assembly sessions.

A similar ban might be considered for the perpetrators of the MH17 shootdown. A quick detour through recent Soviet history can help clarify what such a ban would mean for contemporary Russian elites. Members of the old Soviet ruling class (nomenklatura) who had the privilege of traveling to the West were always conscious that behind them stood not only the military and nuclear might of a superpower, but also Marxism-Leninism. While that ideology was the object of boundless cynicism within the Soviet homeland and even within the nomenklatura, it was relentlessly propagated as an instrument of Soviet power abroad. Over the years, it made disciples among illustrious Ivy League professors, poor third world peasants, and prosperous French and Italian shopkeepers who joined the Communist Party. Regardless of their own lack of belief in communist ideals and its kingdom come of total equality, Soviet nomenklatura were well aware of the international weight of their country’s official ideology.

Today’s Russia is not only a smaller and weaker country than the Soviet Union, but it also lacks a universal mobilizing ideology to offer the rest of the world and intimidate opponents. Russian Orthodox Christianity and Russian culture, outside of Russia, have nothing close to the attraction once exerted by Communism. Nor do they engender fear within the US or European governments. The new Russian elites have filled the resulting ideological void by indulging in high-end consumerism abroad. The symbols of their new religion are items from expensive Western stores, large apartments in London and New York, luxury yachts and private jets, and enrolling their offspring in boarding schools and universities in Britain and the US. Conspicuous, luxurious consumption abroad has become a defining element of their lifestyle.

Being cut off from enjoying their wealth in the West would render Russian elites’ existence drab and even senseless. Nothing would scare them more than an extension of the 2012 Magnitsky Act, which banned a handful of Russian nationals from entering the US due to their complicity in the death of a Russian lawyer investigating corruption.

The people responsible for downing MH17 could be subject to a similar travel ban. The dreadful idea of spending summer vacations on the Black Sea instead of the Cote d’Azur, shopping in Moscow instead of London or New York, and skiing in the Caucasus instead of Courchevel would probably suffice to turn some wealthy Russians against Putin. Russian history has several examples of Russian elites turning against their national leader. Putin has every reason to fear the fate of Tsars Peter III and Pavel I, or even General Secretary Joseph Stalin, who died under mysterious circumstances.

Alexei Sobchenko, a UkraineAlert contributor, is an independent analyst and a former US Department of State employee.

Image: Fred Westerbeke, chief prosecutor in the Netherlands, who leads the international investigation after a surface-to-air missile hit Malaysia Airlines Flight 17 on its way from Amsterdam to Kuala Lumpur on July 17, 2014, killing all 298 people aboard, most of them Dutch citizens, addresses a news conference in Nieuwegein, the Netherlands September 28, 2016. REUTERS/Anthony Deutsch