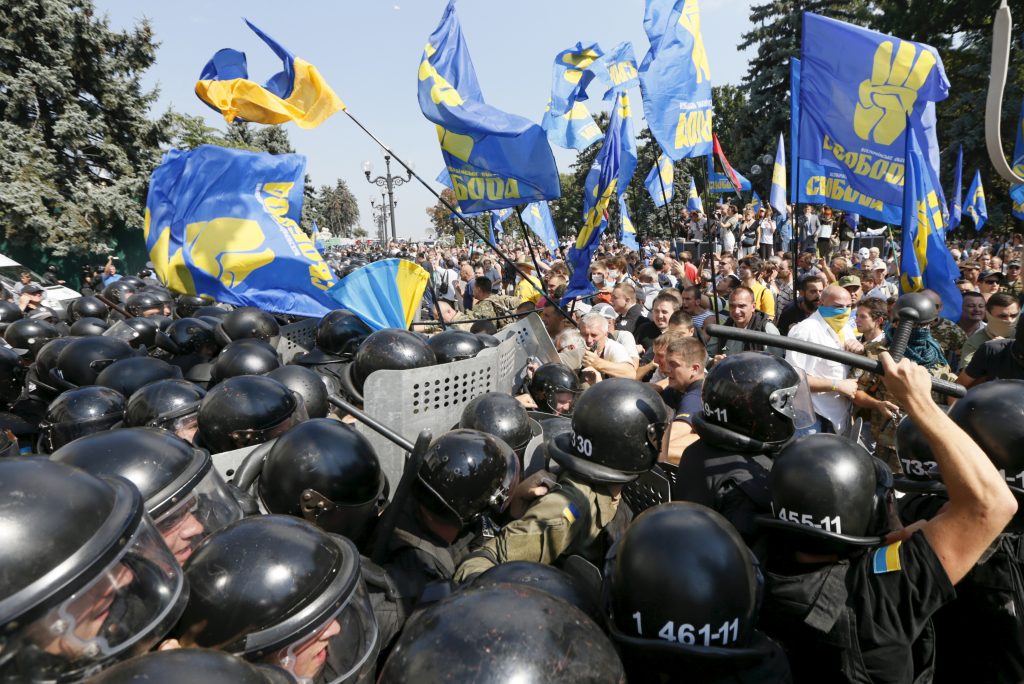 Demonstrators, who are against a constitutional amendment on decentralization, clash with police outside the parliament building in Kyiv, Ukraine, August 31, 2015. Groups like Svoboda claim that decentralization is akin to sacrificing Ukraine. On August 31, it gathered about seven hundred people outside parliament and whipped them into an angry frenzy with these wild claims. By the end of the day, four men had died. Credit: REUTERS/Valentyn Ogirenko

Decentralization, special status, and federalism. These terms are three different things, although they are often mistakenly substituted one for another, and some people think one term means another in Ukraine today.

The decentralization debate is heating up again as Ukraine faces a legal deadline to pass a constitutional amendment that gives the so-called Donetsk People’s Republic and the Luhansk People’s Republic “special status” as the Minsk II Agreement stipulates.

The amendment is quite controversial, and President Petro Poroshenko currently doesn’t have the necessary 300 votes in parliament to pass the measure. In large part, the reason for both of these things is a fundamental misunderstanding of the issues at hand.

It’s important to remember that decentralization was a demand that came from the Maidan. Musician Slava Vakarchuk wrote one of the most compelling arguments for decentralization is in this excellent piece; he argued that it would allow for local decision making on certain issues and develop a new generation of politicians in Ukraine. Too much power had been concentrated, quite deliberately and not for the good of the country, in the hands of a corrupt few for too long.

Decentralization in Ukraine was an easy point to concede in the Minsk negotiation process, because it was already acknowledged as necessary within Ukraine. This fundamental and important change requires an amendment to Ukraine’s Constitution, and both the Constitutional Court and the Venice Commission offered opinions on the proposed amendment.

That Oksana Syroid, deputy speaker of the Verkhovna Rada whose party is part of the governing coalition, also expressed concerns about some of the provisions and wording of the constitutional amendment means that the democratic process is alive and well in Ukraine.

Fundamental changes to Ukraine’s Constitution are rightly a matter of much debate, and interested parties lobby for their interpretations to be enshrined into law. However, notwithstanding binding commitments made to end to the manufactured war in Ukraine, any constitutional change must reflect the interests of the country and its citizens.

Russia’s insistence that Ukraine adopt a federalized model was a constant feature of its media campaign and a major reason cited to justify its military offensive. The reasons were clear. If one or two integral parts could be controlled, a federalized system would essentially create a veto within that system over foreign affairs for the whole state. Vetoes would have been used to block Kyiv from attempting to integrate with any or all western bodies, blocs, unions, or organizations.

Russia’s calls for a federal system in Ukraine were rejected. Military pressure intensified, and then the first Minsk Agreement was signed in September 2014; it states that the “local self-governance of particular districts of Donetsk and Luhansk” was temporary.

Minsk I did not stop further Kremlin aggression and a second Minsk Agreement was concluded in February 2015. In this agreement, Ukraine “conceded” to the same temporary local self-governance that had already been agreed to and pledged to make constitutional changes that would devolve powers to local authorities. At this point, an additional phrase—”special status”—came into the picture.

Ukraine’s new government has refused to adopt a federalized system. As in the case with many other terms used during the Kremlin’s war against Ukraine, the term “federalism” trended and then disappeared completely, but the goal of proxy control of Ukraine’s sovereign choices and vector of development remains in place.

Groups like Svoboda claim that decentralization is akin to sacrificing Ukraine. On August 31, it gathered about seven hundred people outside parliament and whipped them into an angry frenzy with these wild claims. By the end of the day, four men had died.

Federalism has been defeated, diplomatically, and militarily. Local self-governance is temporary. Decentralization is a necessary and positive development. But what exactly does “special status” mean?

The specifics of “special status” include the right to linguistic self-determination. Despite claims to the contrary, everyone in Ukraine has always had free choice about which language they speak.

The special status conditions can be read by anybody, and they need not amount to any sacrifice of Ukrainian sovereignty.

Those in eastern Ukraine deserve to be called “special,” for they have witnessed the horrors of war and deserve every assistance in rebuilding their lives and their land. They did not start this war; this war was brought to their land by a foreign invader. Russia and its proxies need to leave and then Ukrainians can get on with their lives.

Paul Niland is a longtime Kyiv resident and Founder of Statement Email Ltd.