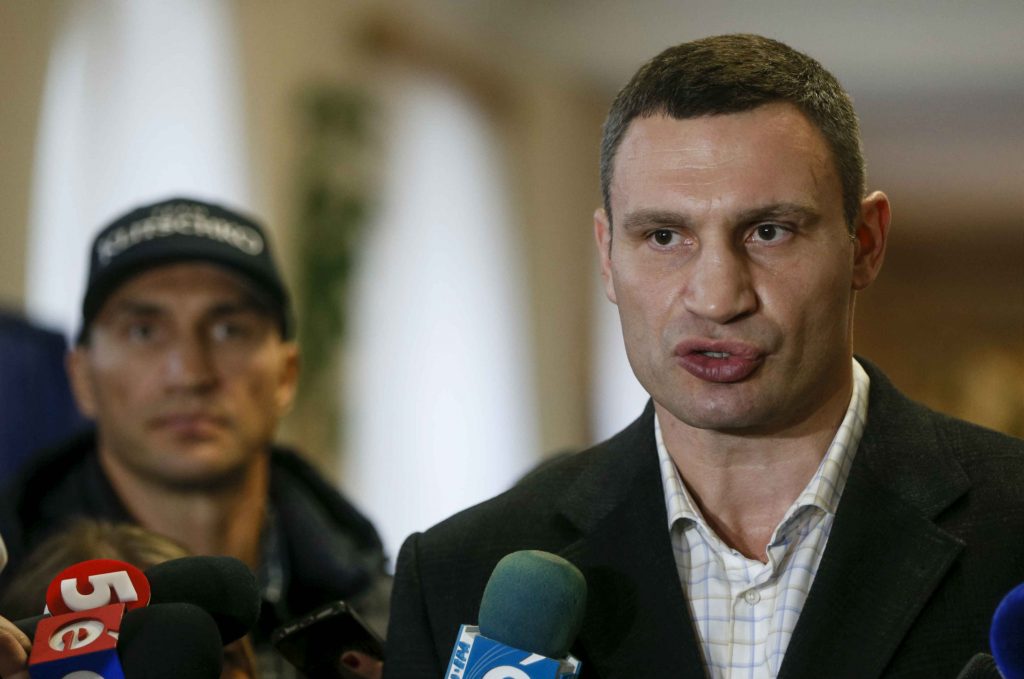 Kyiv Mayor Vitaly Klitschko (R) speaks next to his brother World heavyweight champion Wladimir Klitschko (L) after casting ballots during a second round of a regional election at a polling station in Kyiv, Ukraine, November 15, 2015. Credit: REUTERS/Valentyn Ogirenko

As the ballots are counted in Ukraine’s November 15 runoff elections, the preliminary results show no national mandate or overarching themes. Instead, in a positive step for the country’s democratic development, voters dispersed power widely and put multiple political parties into office. Here’s a quick rundown of the big races and the big surprises:

Kyiv: Incumbent Vitaly Klitchko defeated Boryslav Bereza 64 to 32 percent. Bereza, an independent MP known for his reportedly white supremacist views, narrowly defeated Samopomich’s candidate to make the runoff. While there was never any doubt that Klitchko would ultimately triumph, the real loser is the city of Kyiv for propelling Bereza into the runoff and giving him a surprising 32 percent. The Kremlin propaganda machine just received an early Christmas gift from the residents of Kyiv.

Lviv: Two-term incumbent Mayor Andriy Sadoviy narrowly missed a first-round victory. In the runoff, he squared off against his arch-rivals from the Svoboda Party, led by former Speaker Ruslan Koshulynskiy. Sadoviy won his third term 61 to 37 percent.

Mykolayiv: Samopomich pulled off an upset victory in the southern city of Mykolayiv where Oleksandr Syenkevich defeated the Opposition Bloc’s Ihor Dyatlov 55 to 43 percent. Syenkevich barely made the runoff, but he united voters in the runoff. A victory by a pro-Western candidate over an Opposition Bloc candidate in the formerly closed Soviet city of Mykolayiv is an important first and signals a change in the electoral demographics of southern Ukraine.

Dnipropetrovsk: Borys Filatov likely defeated the Opposition Bloc’s Oleksandr Vilkul 56 to 41 percent (although the count will continue for days). Filatov was backed by oligarch Ihor Kolomoyskyi, who supported the winning mayors in Kharkiv and Odesa as well. Filatov’s victory gives Kolomoyskyi the satisfaction of defeating the President, whose team recently arrested some of the oligarch’s key allies, including Gennadiy Korban. Kolomoyskyi’s Renaissance Party candidate in Uzhgorod also won, giving the oligarch influence in a key western border city.

However, Poroshenko’s candidate prevailed against Kolomoyskyi’s in the western city of Lutsk where incumbent Mayor Mykola Romanyuk defeated a well-financed Ukrop candidate 56 to 44 percent. The Soldarity Party also pulled an upset victory in Chernihiv; MP Vladyslav Atroshchenko defeated three-term incumbent Mayor Oleksandr Sokolov 59 to 37 percent. The President’s party won in Zhytomyr with Serhiy Sukhomlin defeating a rival from Fatherland. However, the vote count in Kirovohrad is going down to the wire with the Solidarity candidate slightly ahead. Meanwhile, Poroshenko backed independents in Rivne, Chernivtsi, Vinnytsya, and Kherson who all won their respective runoffs.

In a show of strength, the Svoboda Party built upon its first-round victory in Ternopil by winning both the Ivano-Frankivsk and Khmelnytskyi mayor’s offices. Ruslan Martsinkiv fended off a well-financed challenge from Solidarity’s Ihor Nasalyk in Ivano–Frankivsk, winning the race 55 to 42 percent. In Khmelnytskyi, Oleksandr Symchyshyn built upon his first-round lead over incumbent Konstantyn Chernylevskyi to win.

Yulia Tymoshenko’s Fatherland Party was also celebrating on election night. Incumbent Sumy Mayor Oleksandr Lysenko won a smashing 69 to 29 percent victory over former Governor Anatolyi Yepifanov. In addition, as a sign of Fatherland Party’s continued connection with its base in central Ukraine, Andriy Bondarenko won a rematch against three-term Cherkasy Mayor Serhiy Odarych. These two victories in central Ukraine bode well for Tymoshenko’s desire to return to the political spotlight.

Finally, the constructive opposition party “Nash Krai” won the Berdyansk mayoral election. Its candidate Volodymyr Chepurniy defeated the incumbent mayor to give the upstart party a victory in one of Ukraine’s thirty largest cities.

Given the wide assortment of political forces winning in Ukraine’s local elections, it’s no exaggeration to say that democracy is alive and well. No single party dominates the spectrum and power is widely dispersed. For a developing democracy, this is a positive step forward.