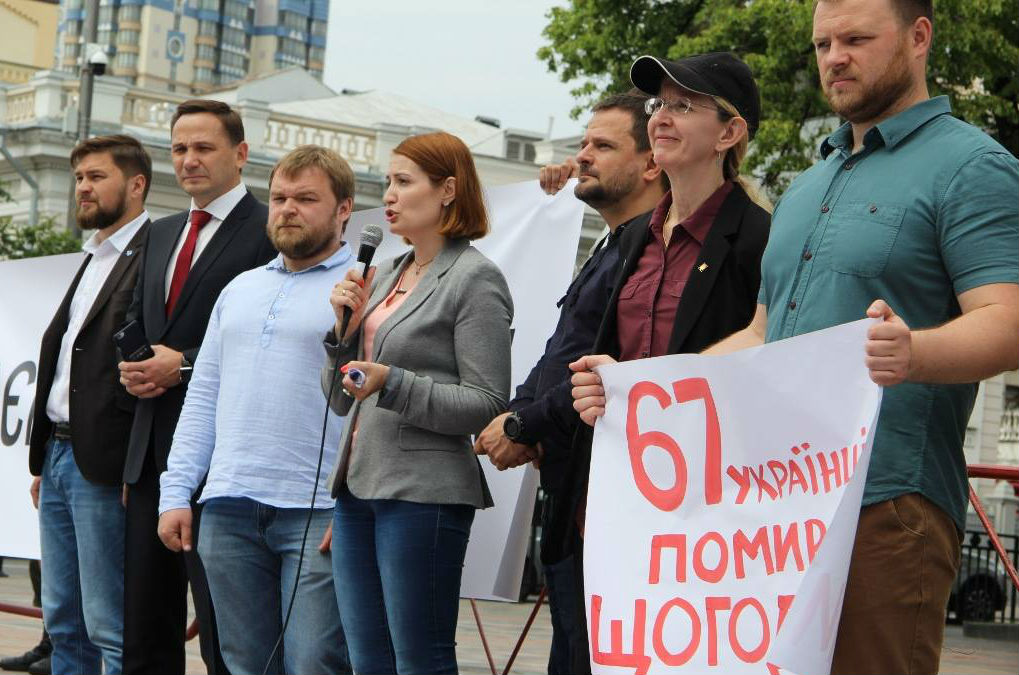 Seven years ago Olga Stefanyshyna took a leap of faith. Pregnant with her second child, she left a secure job and—along with Dmitry Sherembei and Inna Boiko—established a new NGO called Patients of Ukraine. The organization strives to ensure that all Ukrainians receive the high-quality medications they deserve. Without offices, funds or salaries, Stefanyshyna and her colleagues made the move, determined to change health care for the better.

Despite the challenge of starting from scratch, Patients of Ukraine played a key role in creating Ukraine’s first hepatitis C program, obtaining desperately needed medicines for HIV patients, and ensuring children with cystic fibrosis received treatment. After the Euromaidan, Stefanyshyna partnered with Anti-Corruption Action Center board member Oleksandra Ustinova to push through parliament a law outsourcing the procurement of medicines to international organizations, saving the state 40 percent of costs while increasing the quality and availability of a wide variety of drugs.

It’s not an exaggeration to say that the Suprun-Stefanyshyna duo represents a “dream team” for reformers. Suprun herself is a deeply committed fighter who remains determined to transform Ukraine’s Soviet-style health system. Her ministry is in the midst of implementing a new system that will allow each patient to choose their doctor, guarantee primary and emergency care, and cover highly specialized care. Under the new system, “money follows the patient,” so doctors are incentivized to provide high-quality care and end the informal but widespread requirement that patients bribe doctors if they want to receive decent care.

Suprun and Stefanyshyna will be sharing the load. While Suprun drives the overall reform, Stefanyshyna will focus on creating an electronic database to track the availability of medicines in the regions, while also coordinating the work of fulfilling the obligations of the health care-related requirements of the EU-Ukraine Association Agreement.

Stefanyshyna admits she faces a daunting challenge, but believes her time at Patients of Ukraine prepared her well. “The main lessons I learned…are first that nothing is impossible; we only need persistence and time,” she said. “I understand that the Ministry of Health needs to listen to the needs of its true ‘customers,’ Ukraine’s people. And I may be in a different job, but I still want to be the voice within the Ministry speaking out for the rights of Ukraine’s patients; I intend to push for them!”

She quickly points out that the Ministry that she’s joining is very different from the one she first came up against seven years ago. While there’s a history of corruption and bureaucratic resistance to reforms, Stefanyshyna has been struck by the number of young professionals leaving secure private sector jobs or internationally-funded NGOs to work for the Ministry of Health, which indicates that people see a real opportunity to fundamentally change health care, she said.

Despite her optimism, though, Stefanyshyna knows that with elections around the corner, time is short. “It is very important to launch the reforms before the power shift, so that they will become irreversible, and the new leaders of the country will not be able to turn back the clock,” Stefanyshyna said. “However, it’s not always easy to break through the populist slogans spread by opponents of reforms, especially during the pre-election ‘hot’ period,’ when populism actually turns into the core of many political parties’ programs.”

Given what’s at stake for Ukraine, it’s imperative that the West continue to support Suprun and Stefanyshyna’s reform agenda.

First, Ukraine’s partners should provide whatever technical assistance the Ministry needs. It’s rare for the international donor community to have an opportunity to work with a ministry as committed to reform as the Ministry of Health is, and Ukraine’s Western partners should ensure that whatever challenges it faces, a lack of resources is not one of them. Strategically, it’s far better to concentrate resources on a government agency truly committed to reform than frittering away money on those which only pay lip service.

Second, Ukraine’s partners should emphasize that health reform is a key priority and that it expects Kyiv’s leaders not to interfere with the implementation process.

Finally, the West should continue supporting the key NGOs involved in Ukrainian health care reform, such as Patients of Ukraine and the Anti-Corruption Action Center. The so-called “sandwich approach,” where civil society presses Kyiv from one side while the West does the same from the other, remains a proven formula and there’s no reason to change this approach now.

Image: Olga Stefanyshyna (center), has been named deputy minister of health. Here she presses for the passage of health care reform in Kyiv, Ukraine, on June 6. Credit: Patients of Ukraine