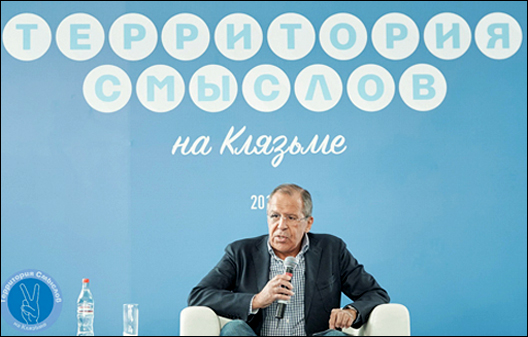 Each summer, as part of ongoing efforts to influence their young, Russia’s government leaders and propagandists head to a conference center on the Klyazma River about 130 miles northeast of Moscow to address the “Terra Scientia” Russian Youth Education Conference.

Despite its lofty name, the conference bears little trace of free inquiry. Over the course of six week-long shifts—each with around 1,000 participants representing a different sphere of endeavor—Russia’s most politically reliable youth leaders are introduced to a steady stream of ideas, messages, and talking points to be used over the course of the year in civic and educational work.

On August 24, it was Russian Foreign Minister Sergei Lavrov’s turn to regale a large audience of young students and teachers of the social sciences. His remarks included the requisite number of patriotic dithyrambs about President Vladimir Putin’s achievements in foreign affairs and national security.

Lavrov blithely declared that Putin “is the world’s most popular leader” and that many public opinion polls backed up his assertion. Regrettably Lavrov appeared unaware that, according to a Pew survey released August 5, Putin has a median trust rating of 24 percent and is viewed negatively throughout Europe, North America, Latin America, and the Middle East. Nor did Lavrov let his audience of youth leaders know that since Russia’s takeover of Crimea—a violation of international law—and its clandestine war against Ukraine, people around the world overwhelmingly mistrust Russia these days.

But the centerpiece of Lavrov’s presentation was his claim that the West was in decline and that US and European efforts “to artificially preserve … domination are resulting in international chaos.” The assertion of Western decline appeared particularly rickety on that particular day, when the Shanghai Composite index dropped by 7.6 percent, contributing to a 42 percent decline since June.

Nor was Lavrov deterred by word of steep declines in the economies of the other BRIC countries, nor by the collapse in world commodity prices, including oil and gas—the backbone of Russia’s economy—which in turn had precipitated a fall in the value of the ruble to 71 to the dollar, the year’s lowest level to date.

Perhaps the West was in decline, but Lavrov failed to note that Russia’s economy was in freefall, and that the International Monetary Fund warns that—besides losses from lower oil and gas prices—Russia stands to lose 9 percent of its GDP due to sanctions imposed by the selfsame West.

But Lavrov’s construction of his dream world by no means complete. Representing a country that has just announced a likely ban on all Ukrainian agriculture exports in 2016, has deployed units of its armed forces in combat on Ukrainian soil, has sent as many as 30,000 of its fighters to wage war on Ukraine, and has provided hundreds of tanks and artillery pieces to support separatists it had helped organize, Lavrov declared to the assembled youth leaders that Russia “opposed the language of force and sanctions.”

Alas, the Terra Scientia is not a place for study and reflection. It appears there are virtually no such places in official Russia. Knowledge and the open discussion of serious problems have been replaced not simply by sophistry, but by the time-worn tradition of the Big Lie, a technique much admired by Putin, who last year professed to shocked rabbis his admiration for the effectiveness of Nazi propagandist Joseph Goebbels.

For several years, Russia scholars have been documenting the country’s accelerating flight from reality. While the use of such propaganda for the masses is hardly surprising, what mystifies is how little sober exchange of real information occurs within Russia’s elite. Consequently, there is less and less opportunity to address the stark state of affairs and the real challenges confronting Russia.

Given the dream world the Kremlin has constructed, Russia’s people are in for a rude awakening. When it comes, it’ll likely have dramatic consequences for the stability of the authoritarian regime Putin has built, and which Lavrov so loyally and uncritically serves.

Adrian Karatnycky is a Senior Fellow at the Atlantic Council and co-director of its Ukraine in Europe Initiative.