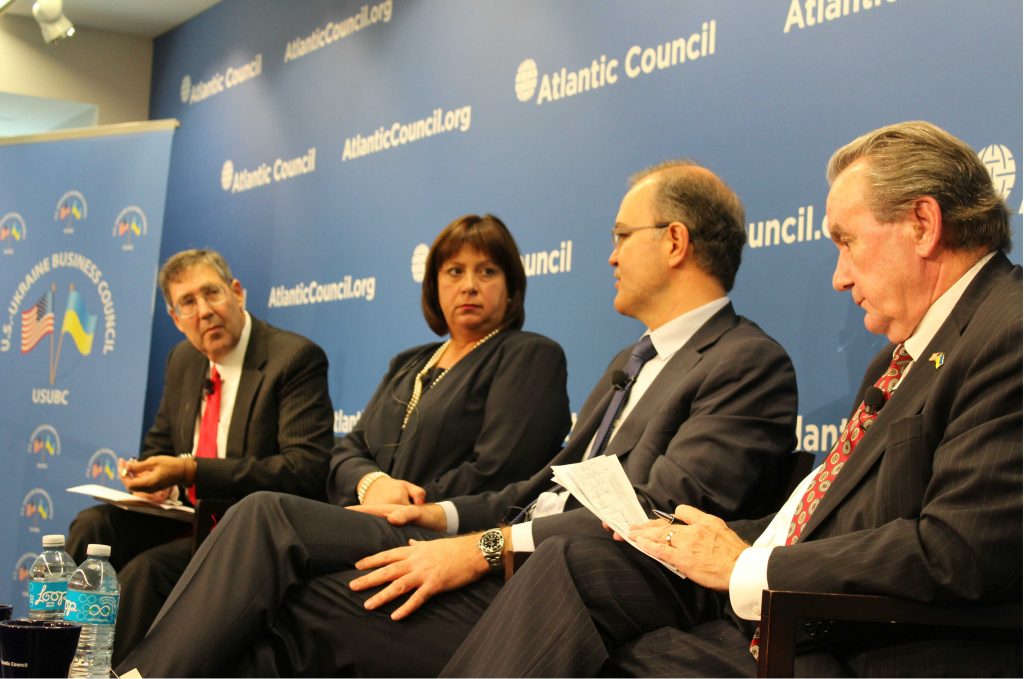 “There’s no country in the world that has been in such dire circumstances and yet turned around the economy in such a short period of time,” said Natalie Jaresko, who served as Ukraine’s Finance Minister from December 2014 to April 2016. She spoke in Washington on October 11 at a discussion sponsored by the Atlantic Council and the US-Ukraine Business Council.

In 2009, Ukraine’s GDP declined 15 percent as a result of the global financial crisis, and it remained stagnant or declining through 2015. But through an infusion of $25 billion in global support and leaders’ efforts to make serious fiscal adjustments, restructure its debt, reform its energy sector, and get control of its banking system, Ukraine is expected to see 1.5 percent GDP growth this year.

Ukraine’s “longest and most successful reform process,” as Jaresko put it, has not only spurred GDP growth; there has also been an increase in local currency deposits, inflation is dropping, lending rates are gradually being reduced, and credit has been expanded. This dramatic about face has occurred in spite of Russia’s occupation of Ukraine’s industrial base, the war in eastern Ukraine, the Kremlin’s broader hybrid war, and an estimated 1.7 million internally displaced persons needing assistance.

Jaresko cautioned that these reforms are not yet irreversible, and that Ukraine is not moving quickly enough; fatigue, vested interests, and populism are stalling the process. To revitalize it, she urged an international consortium of bilateral, multilateral, and private donors to pledge $25 billion for a five-year infrastructure fund conditioned on more structural reform.

“We must now win over the hearts and minds of Ukrainian society,” she said. “Citizens in Ukraine are fatigued, and rightfully so. The immediate effects [of reform] on the population have been painful.” To overcome this fatigue, a substantial chunk of the $25 billion would be used to modernize schools and hospitals, revamp government with hardware and software, invest in roads and bridges, and fund other projects that will “change and improve the daily lives of citizens,” she said. It would show Ukrainians “that these sometimes painful reforms are worthwhile and their lives are getting better.”

Jaresko emphasized that she isn’t just referring to infrastructure in a traditional sense. She wants to include things like systems that eliminate fraud and increase efficiency. While she was minister, her staff looked for examples around the world that Ukraine might emulate. In India, the country uses retina scans to reduce fraud, for instance. Jaresko acknowledged that “Ukraine’s not going to have the money in the budget to invest in this type of infrastructure in the near future,” because any additional funds will probably go toward civil servant salaries or pensions. Hence, the need for an infusion of funds.

She stressed that it would not be an investment in the budget or the National Bank of Ukraine reserves, which “are invisible to the average citizen.” Instead, the new fund would complement the IMF’s $17.5 billion program that focuses on macroeconomic stabilization

When she took office in December 2014, political will for reform was strong because Ukraine was in a terrible mess. But two things slowed it down: Ukraine averted its financial crisis, and consequently the sense of urgency has diminished. Plus, the next round of reforms pose a real threat to vested interests.

Still, some of the gains that have been made already, including the ProZorro online e-procurement system and the electronic declaration system that requires officials to disclose their assets, genuinely threaten vested interests. Nonetheless, “the success of these reforms is often slowed or limited by continued push back of vested interests,” she said.

But she blamed a large share of the country’s stalled progress on populist politicians. “Populists throw out cheap, easy answers that sound fabulous,” and they “fool the public into believing that there’s some other way to rebuild the economy.”

Following her formal remarks, Jaresko was joined for a short discussion by Ambassador John Herbst, director of the Dinu Patriciu Eurasia Center at the Atlantic Council; Morgan Williams, president of the US-Ukraine Business Council; and Dr. Athanasios Arvanitis, deputy director of the European Department at the International Monetary Fund.

Arvanitis agreed that while “impressive progress has been achieved,” there’s a real need to make Ukraine’s economy grow.

Williams said the international business community still doesn’t see a critical mass of reforms. Most companies don’t plan to increase their 2017 operations in Ukraine, although they may think about it for 2018 and 2019.

Jaresko agreed that a paradigm shift is needed to appeal to investors, and laid out three ideas that would get their attention: land reform, the rapid privatization of state-owned enterprises, and establishing an independent court that would temporarily enforce contracts until the country’s judicial system catches up.

Jaresko emphasized that time is of the essence, and the international community must step up its support for Ukraine before it’s too late. “We must revitalize support for this reform process and the reformers to build on the strength of what is a truly uniquely vibrant and dedicated civil society,” she said. “One unlike anywhere else in the former Soviet Union.”