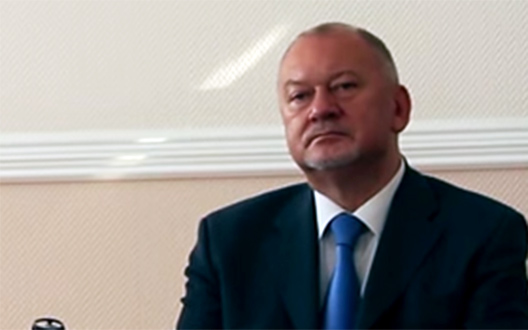 Last week the Russian-backed “Donetsk People’s Republic” became even more Russian-led. The two Muscovites at the top of the separatist leadership introduced the latest Russian citizen to join their team – and the one with the most prominent role so far in the Kremlin’s quarter-century of struggles to cripple the independence of its neighboring European states.


The new “deputy prime minister for state security” in the separatists’ self-declared republic is Lieutenant General Vladimir Antyufeyev, 63, a longtime Russian police and special operations commander who since at least 1991 has been a key leader of violent campaigns by Moscow to dominate Latvia, Moldova, and Georgia. From 1992 to 2012, Antyufeyev headed the KGB, and all security operations, within Transnistria, the impoverished and isolated proto-state that Russia props up in Moldova.

Until now, the Russians leading the separatist war in Donetsk had been obscure personalities. The Donetsk republic’s self-declared prime minister, Alexander Borodai, is a Moscow-based, ultranationalist former newspaper editor and political consultant. The defense minister, a longtime Russian army and intelligence colonel named Igor Girkin, has acknowledged that he fought in Russia’s suppression of the independence movement in Chechnya. (The token Donetsk native in the leadership, “governor” Pavel Gubaryev, worked in advertising and as a Santa Claus-for-hire.)

But Antyufeyev has a long, public history punctuated by arrest warrants in Latvia and Moldova from his violent roles there. Antyufeyev’s emergence in Donetsk is perhaps the clearest signal yet of what the Kremlin hopes to create in southeast Ukraine: a heavily armed enclave like Transnistria, under the control of Russian ex-military and KGB officers, who will remain at war with Ukraine and do their best to cripple Ukrainian independence and ruin Kyiv’s chances at real and effective European integration.

Antyufeyev is perhaps Moscow’s most experienced practitioner at the art of the “frozen conflict.” That, of course, is the Kremlin’s tactic of sponsoring a secessionist war in a nearby country, and then propping up a breakaway mini-state as a thumbscrew by which to force the targeted government to become Moscow’s submissive ally. In the press conference July 10 that introduced Antyufeyev to Donetsk, he acknowledged helping in all of the Kremlin-initiated frozen conflicts so far: the Transnistrian war, and the secessions from Georgia of South Ossetia and Abkhazia. In Donetsk, he is tackling by far the biggest, most populous and most economically important region that Russia has attacked in this way.

Antyufeyev fought his first war amid the Soviet Union’s collapse in 1991. In the Baltic republic of Latvia, he commanded a unit of Soviet Interior Ministry special operations forces (known by their Russian acronym, OMON). His troops conducted violent attacks on Latvians then campaigning for independence from the Soviet Union.

Soon after Latvia declared independence on August 21, 1991, the newly re-established state launched a criminal investigation, issuing arrest warrants for Antyufeyev and other OMON officers. They quickly fled to Russia and Antyufeyev seemed to disappear.

By the end of 1991, he had assumed a new identity, as “Vadim Shevtsov,” and arrived in Trasnsnistria. A year later he became that region’s “minister for state security,” heading the secret police force, which in Transnistria even retained its Soviet-era acronym: the KGB.

Senior Ukrainian journalist Vitaliy Portnikov, who has covered the politics of the ex-Soviet states for decades, writes that Antyufeyev’s Transnistrian KGB not only hunted down domestic opponents of the mini-state, but “is also a cover for turning Transnistria into a corruption black hole, a Mecca for criminals and contrabandists. Transnistrian security service general Antyufeyev is at the center of this process.” His often cruel suppression of all dissent and his corruption led locals to refer to him as the “Transnistrian Beria,” after Lavrentiy Beria, the secret police chief under Soviet dictator Josef Stalin.

During twenty years in which Antyufeyev was “the power behind the throne” in the Transnistrian regime, according to Polish-American historian Marek Jan Chodakiewicz, many Western and international institutions – including human rights groups, the US State Department and a European Parliament delegation – have reported severe, systemic political repression, torture, corruption and criminality. In its latest report, in 2013, the human rights organization Freedom House ranked civil liberties and political rights at six on a scale in which seven was the lowest measure.

Antyufeyev’s longtime partner, Transnistrian President Igor Smirnov, was abandoned by a Kremlin looking for a more diplomatically presentable leader and defeated in a 2012 election. His replacement, Yevgeniy Shevchuk, took office promising to reduce corruption and immediately fired Antyufeyev. The KGB chief responded by barricading himself in his offices for three days. After Antyufeyev received safe conduct back to Russia, the new Transnistrian government charged him with abuse of power, corruption and destroying secret documents concerning foreign currency reserves and customs duties.

In Ukraine, Antufeyev will continue to help Russia impose the Kremlin’s will, said Oana Serafim, the director of Radio Liberty’s Moldova service. “Antyufeyev is an old KGB man, he is a master of blackmail, anti-reformer, manipulator of dirty money and is very violent,” she said.

Vitaliy Portnikov underscores that Antyufeyev’s re-emergence in Ukraine is no chance occurrence, but “the initiative of the senior leadership of Russia’s special services.”  Antyufeyev’s defense of Russian interests in Transnistria “was exemplary and tough,” Portnikov wrote in an essay last weekend. “He’s also an experienced smuggler. Those who sent him to Donetsk might be thinking of personal enrichment during wartime, and who better than Antufeyev knows how to guarantee that?”

Image: Vladimir Antyufeyev during a July 10 press conference in Donetsk, Ukraine, where he was presented as the Donetsk People’s Republic deputy prime minister in charge of state security. SOURCE: Screenshot from the city of Makeevka website video of the press conference