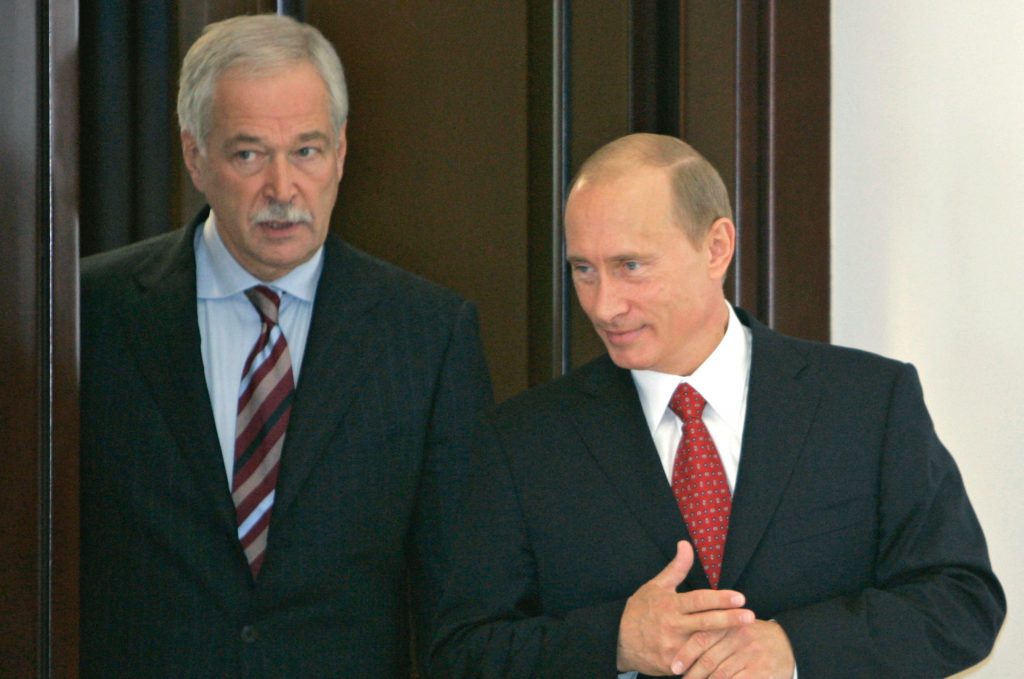 On December 26, Russian President Vladimir Putin appointed one of his close, trusted aides, Boris Gryzlov, Russia’s representative in the Trilateral Contact Group on Ukraine, which concluded the two Minsk agreements on the Donbas in September 2014 and February 2015. This appointment suggests an important change in Russia’s policy toward Ukraine. Gryzlov is a heavyweight in Putin’s inner circle, a permanent member of its security council, former minister of interior, speaker of the State Duma, and a colleague from Putin’s St. Petersburg KGB days.

Gryzlov replaces lightweight ambassador Azamat Kul’mukhametov, who has held that post since April. His appointment was seen as an attempt to downplay Russia’s role and to force Ukraine to negotiate with the leaders of the Russian-controlled Donetsk People’s Republic (DNR) and Luhansk People’s Republic (LNR). Now, the Kremlin has taken direct control.

This year, three strong-minded rebel commanders (Pavel Dremov, Aleksei Mozgovoy, and Aleksei Bednov) were killed in a professional fashion, making observers presume the killers belonged to the Russian military intelligence. In the summer, it became evident that the troops of the DNR and LNR were directly subordinated to the Russian Ministry of Defense and the Russian commanders were identified by the Ukrainian Defense and Security Council.

The political leaders of DNR and LNR have been the same since August 2014, when Aleksandr Zakharchenko replaced Alexander Borodai as prime minister of the DNR and Igor Plotnitskiy became head of the LNR. Their appointments marked the end of Russia’s attempted Novorossiya project, the incorporation of eight Ukrainian regions into Russia. Both leaders are considered of limited capability with no political appeal but obedient to Moscow.

In the second half of 2014, the occupied Donbas went through terrible destruction. Russian engineering troops blew up bridges and factories were subject to extensive artillery fire. All banks and ATM machines were looted and banking ceased. Most shops closed, leaving little but grocery stores. Rebels plundered or seized small, medium-sized and state enterprises, while big private enterprises, largely owned by Rinat Akhmetov’s DTEK and Metinvest, were protected by the Kremlin. They continue to operate according to Ukrainian law in Ukrainian currency and pay Ukrainian taxes. Their workers have to go to ATM machines in free Ukraine to collect their salaries. Roughly 2-2.5 million people have fled the Donbas and about as many remain; 1.4 million moved to free Ukraine. Within the DNR and LNR territories, the population has moved, from small towns close to the fighting to the main cities, Donetsk and Luhansk. The economy has been devastated. This territory that produced 10 percent of Ukraine’s GDP now works at about 30 percent capacity. The border from Ukraine to the DNR is relatively open, while the LNR allows much less transborder traffic.

During the Minsk negotiations in February 2015, one of the main Russian demands was that the Ukrainian government provide public financing to the occupied Donbas, although the Ukrainian government was not able to control the territory or collect taxes there. Sensibly, Ukraine has insisted that it can only pay pensions to people who are registered in non-occupied Ukraine and collect their pensions there. In April 2015, Russia hesitantly started paying pensions in cash to residents in the occupied Donbas.

In October, the Kremlin changed its management of the occupied Donbas, though this has not been publicly announced. Several blogs mentioned the change on October 30, and businessmen operating in the area have confirmed the changes. The management passed from the Russian presidential administration to the Russian government. Putin’s personal assistant Vladislav Surkov was replaced by Deputy Prime Minister Dmitri Kozak. Both are Putin loyalists, reporting directly to the President, but Surkov is an aggressive troublemaker who was in charge of the Novorossiya project, while Kozak, a lawyer from St. Petersburg, is in charge of regional affairs, including Russia’s management of its frozen conflicts.

The economic management of the occupied Donbas has changed as well. Under Kozak, Russia’s Deputy Minister of Economic Development for regional development Sergey Nazarov is in charge of the region’s economy. He chairs a Russian working group for humanitarian assistance for the occupied Donbas, involving all the relevant Russian agencies and commanding the governments of the DNR and LNR. Private Russian enterprises do not seem to play any role.

Thus, the Russian federal government swiftly changed from lawless destruction to financing the reconstruction and humanitarian aid in the occupied Donbas. As a consequence, the still-operating companies have inched up their production. DTEK has been allowed to repair the state-owned railways with its own means so that it can transport coal produced in its mines in the occupied Donbas by rail to its power stations in free Ukraine.

Needless to say, the Russian government operates only in rubles, but it is trying to restore the banking system. An excellent journalistic article reports that the “only bank open is the rebel-run Republican Central Bank, which has around 100 branches.” There are other reports that a Russian state bank, the Russian National Commercial Bank, has entered this territory.

The transition to Kozak and Gryzlov is undoubtedly an important milestone. Kozak’s appointment indicates that Russia has concluded its active military phase and moved on to long-term management of frozen conflicts. The appointment of Gryzlov is more curious. He represented Putin in the roundtable negotiation that led to the settlement of the Orange Revolution with repeat elections in December 2004. If Putin authorized Gryzlov to make substantial concessions to Ukraine then, he might be ready to do so again. The Russian war in the Donbas has been neither small nor victorious, so the best the Kremlin can do is to forget about it. In any case, unlike his predecessor, Gryzlov can negotiate with the authority of the Kremlin.