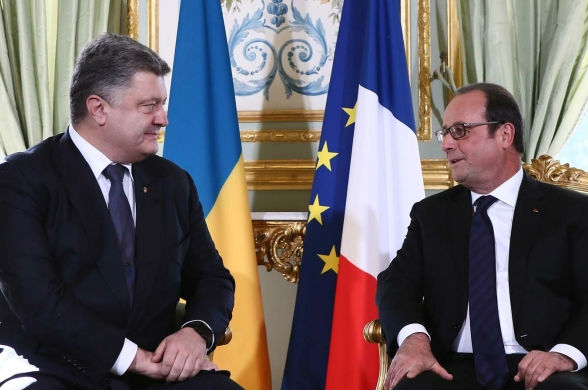 The main problem with the West’s approach to Russian President Vladimir Putin is that it doesn’t seem to know who it’s dealing with. In an excellent article in Foreign Policy, Raymond Tanter states the bleatingly obvious—the Russian leader is nothing but a bully and should be treated as such. While the United States and Europe favor a “win-win” approach, Putin prefers the “I win, you lose” model. Any attempt to find common ground with someone who thinks this way is doomed to fail. They tend to view a desire to compromise as a sign of weakness.

So now that we have that out of the way, the fact that heavy weapons have been silenced in the Donbas and the Russian propaganda machine is focusing its coverage on Syria (and a recent blast of lies on MH17) is unfortunately not good news for Ukraine. The recent summit in Paris in early October revealed that French President François Hollande and German Chancellor Angela Merkel simply want Ukraine to “go away.”

In Paris, Ukrainian President Petro Poroshenko got a French proposal under which Ukraine would need to pass a special law setting out the rules for local elections in the rebel-held areas. This should be done in consultation with the separatists, in other words—Moscow. In addition, the separatist leaders are to be given amnesty so that they can run in these elections. If international observers deem the elections acceptable, Ukraine is to regain control over these territories.

Considering the riots outside the Ukrainian parliament when the special status issue for the rebel-held areas was debated in the Rada, a Moscow-approved election bill will be almost impossible to pass politically. Once again Europe needs to be reminded that “peace” is not simply the absence of conflict, but mainly, the presence of justice.

This proposal is a violation of Ukrainian national sovereignty. The country would benefit from some form of decentralization, but that cannot mean giving away parts of it to Russia’s proxies. Putin doesn’t need large chunks of territory to claim success. If the “special status” of the rebel-held areas includes a say in Ukraine’s foreign policy, it will no doubt be used to block any further approaches from Kyiv to the EU and NATO. Indeed, several leading figures in the so-called “People’s Republic of Donetsk” have said they want non-alignment to be part of the amendments to Ukrainian legislation and that a referendum on NATO would be a violation of the Minsk agreement.

Allowing the separatists to run these areas is a perfect way for Putin to create a frozen conflict, thus making Ukraine less attractive from the point of view of the West. Donetsk and Luhansk are to play the role of South Ossetia and Abkhazia in Georgia or Transnistria in Moldova. This is, of course, a far cry from the planned conquest of Novorossiya, and not everyone in Russia is pleased. The far-right website Sputnik & Pogrom is sulking about the end of the war and talks about an increasingly demoralized pro-Russian army in Donetsk. Angering such groups could be a potential problem for Putin.

Compared to Poroshenko though, Putin can afford to wait. The Ukrainian President’s domestic support could erode quickly if he is seen as not standing up to Moscow. He can count on Western backing if he implements the painful reforms Ukraine needs but that is easier said than done in a country that is still hopelessly corrupt and griped with infighting.

Putin can still fool most of his people with his propaganda machine and take care of the rest in other ways. The editor of Sputnik & Pogrom recently had his house raided by the police; we’ll see if he gets the message. The intervention in Syria is partly aimed at Ukraine as well. As an editorial of the Russian newspaper Nezavisimaya Gazeta put it: “When there are [Russian] aircraft there, a compromise with Russia becomes an essential condition. And what are the bargaining chips? Ukraine, Donbas, Crimea, the sanctions.”

The West has to understand that “win-win” is not Putin’s game. Support for Ukraine needs to increase. This should include arming the Ukrainian military. Claims like “there is no military solution” are a cliché since Russia is using military means to force a favorable political outcome and therefore, the cost of such actions has to increase. Let’s not forget that most Russians believe their country is not militarily involved in Ukraine and would like it to remain that way. Sanctions also must remain in place since economic pressure is unfortunately the only language Russian elites understand. Bullies have to be put in their place.

Aaron Korewa is a former political adviser to Carl Bildt, former Foreign Minister of Sweden. He lives in Stockholm.