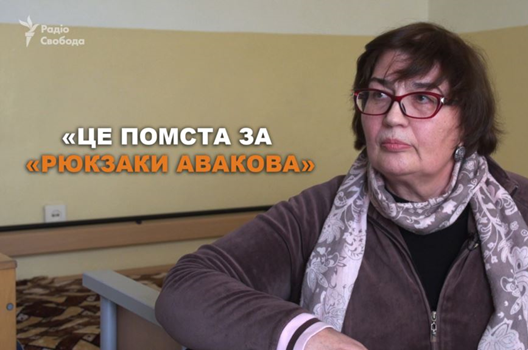 Ukraine is in danger of backsliding, big time, and few people realize just how serious it is. This week, the Constitutional Court eliminated a law which made corrupt officials liable for illicit enrichment. This will immediately result in the closure of sixty-five high-profile criminal cases. The court decision may jeopardize Ukraine’s relations with international institutions.

But that’s not all. There’s a serious effort to undermine Ukraine’s new anti-corruption institutions underway that hasn’t gotten the attention it deserves.

The fight can be seen through the harassment that Nadiya Bugrova, a forensics expert with thirty-seven years of experience, faces. The police will likely indict Bugrova this month and she may go to jail for three years.

Her crime? She honestly assessed the value of backpacks for the National Guard fighting on Ukraine’s front lines.

Based on her conclusions, the National Anti-Corruption Bureau of Ukraine charged Interior Minister Arsen Avakov’s son Oleksandr with embezzling $500,000 from the state.

In 2014, Oleksandr Avakov and deputy minister Serhii Chebotar were caught on video discussing the procurement of 5,000 backpacks for National Guard soldiers.

NABU opened an investigation in 2016, and Bugrova assessed the value of the backpacks in 2017. She concluded that they did not meet the procurement requirements and revealed a number of defects. Bugrova set the real value of each backpack at around $22 instead of $115 that the state had paid. Her evaluation was key to NABU’s criminal investigation: it had to establish whether or not financial damage to the state passed the threshold for criminal liability. Bugrova’s conclusions opened the door for criminal prosecution.

In 2018, the Specialized Anticorruption Prosecutor’s Office watered down the case and dropped charges against Avakov’s son and Chebotar. The middleman concluded a plea deal with the prosecution and got a suspended sentence. Nonetheless, this was not enough for Avakov.

The police started to harass Bugrova. In November 2018, her home and office were searched on dubious grounds. The police seized all materials related to the Avakov backpack case, even though they did not have a court warrant to do so. The police also seized materials from other cases as well as all family funds, bank cards, and cell phones of family members.

Then the police charged Bugrova on grounds absolutely different from the ones mentioned in the search order—$180 fraud for allegedly forging a forensic conclusion. The investigators are ready to send the case to trial.

That’s not all. The Ministry of Justice, headed by Arsen Avakov’s associate Pavlo Petrenko from the Narodnyi Front party, intended to revoke her expert license, but their plan was prevented due to publicity.

Some may try to dismiss Bugrova’s case as an outlier. It’s not. We are witnessing a full-fledged attack on forensic experts. It’s hard to overstate the importance of forensic expertise in a criminal investigation. The size of the damage and the severity of the offence depends on the conclusion of the expert. Ukraine’s courts and anti-corruption bodies cannot do their work without competent and honest forensics experts.

The state wants to block corruption-related investigations by establishing control over forensics now. We see a connection between the effective work of NABU and the high likelihood that the future anti-corruption court will also work well and threaten the interests of the corrupt elite.

In March 2018, new amendments to the procedure codes were enacted which complicate forensic work. Courts now appoint forensic experts for criminal cases. Previously, an investigator or prosecutor could select an expert almost immediately after the crime took place.

Also, the law introduced a state monopoly on forensics in criminal cases. Earlier, private forensics experts like Bugrova could have performed such tasks. Right now only state experts are eligible, which also creates additional opportunities for controlling their conclusions. For example, the head of Kyiv Scientific Research Institute of Forensic Evaluations tried to withdraw the forensic evaluation of his subordinate in the case of Roman Nasirov, the former tax administration chief, suspected of causing state losses of around $80 million.

The situation may get worse. Ukraine’s parliament is considering draft law 8336 which would cancel the exclusive appointment of forensics by the court for all criminal cases, apart from high-profile corruption ones, entrench the monopoly of state forensics experts in criminal cases, and even prohibit experts from testifying in court, which will create additional opportunities for fraud.

A central pillar of independent investigations—quality forensics—is jeopardized. The serious flaws in draft law 8336 must be eliminated, and the international community must watch Burgova’s case closely. Jailing her would set a dangerous precedent and send a message to forensics experts that they are not safe when fairly and properly evaluating damage to the state caused by top corrupt officials.

Olena Halushka is the head of international relations at the Anti-Corruption Action Center. Olena Scherban in the head of AntAC legal department