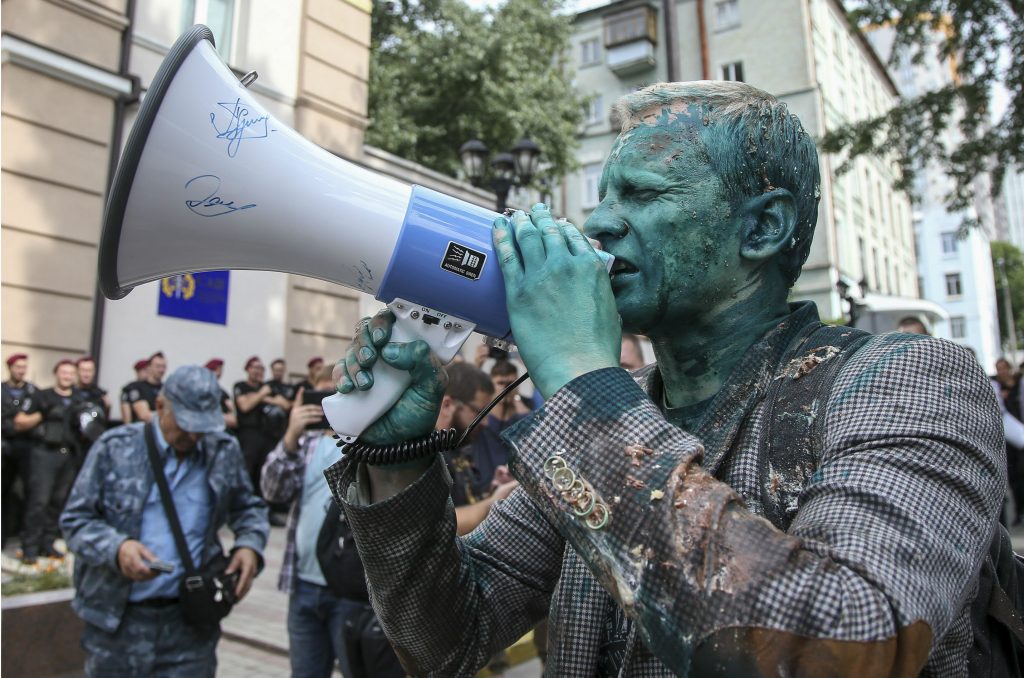 Ukraine tries to project a proud image of a Western country with enormous potential held back by Russia, which is absolutely true, but it’s also true that it often holds itself back.

Take yesterday as an example. It was not a good day for Ukraine.

A peaceful demonstration in Kyiv meant to highlight the country’s inability to prosecute criminals and apply justice blindly turned ugly when counter-demonstrators disrupted the proceedings and assaulted a prominent activist.

How one treats its activists is a quick way to measure just how democratic and liberal a society is.

Organized by the Anticorruption Action Center (AntAC) and other activists, the event was held outside the Specialized Anticorruption Prosecutor’s (SAP) office and meant to spotlight the selective decisionmaking of SAP head Nazar Kholodnytskyi, who recently terminated the so-called “backpacks case.” The case concerns Oleksandr Avakov—the son of the powerful Minister of Internal Affairs Arsen Avakov—who the National Anticorruption Bureau of Ukraine accuses of being the middleman in a scheme that sold the government overpriced military backpacks that ripped off the state to the tune of $520,000. Kholodnytskyi has admitted that there was enough evidence for a conviction. Wiretaps have also revealed Kholodnytskyi warning criminal suspects in advance of searches, as well as instructing defendants prosecuted by SAP how to beat the charges against them. The evidence of Kholodnytskyi’s misdeeds was enough for the US Embassy to cancel his visa.

With the Qualifications and Disciplinary Commission of Prosecutors set to rule on Kholodnytskyi’s future within the next few days, AntAC held a rally to demand his resignation. Shortly after twenty anticorruption activists began holding signs, around 200 counter-protesters composed of an assortment of thugs, police in civilian clothes, babushkas, and young people showed up to defend Kholodnytskyi and condemn the National Anticorruption Bureau of Ukraine—the bete noir of Ukraine’s corrupt elite—and its leader Artem Sytnyk.

The counter-protestors weren’t very convincing. One elderly lady admitted she had been paid UAH 80 (around $3) to attend. While most of Kholodnytskyi’s defenders held anti-NABU posters, few seemed to even know what NABU was. This “counter-demonstration” was led by former Avakov adviser Ilya Kiva, who could charitably be described as no angel. Kiva used to run the Interior Ministry’s counternarcotics division and is a former member of Right Sector.

Shortly after AntAC Chairman Vitaliy Shabunin arrived, camouflaged titushki attacked him with a green liquid used in hospitals throughout the former Soviet Union and hurled Roshen cakes at him. He suffered chemical burns in both eyes. And though the violence against Shabunin was committed openly, uniformed cops on the scene did nothing.

This was just the beginning. Later that day, a pack of titushki showed up at NABU’s offices and ran amuck, smashing through security points while screaming violently. Subsequently, they threw furniture and threatened NABU employees. Once again, the police stood by and allowed the titushki to rampage unimpeded before finally politely asking them to leave. NABU called the attacks a “well-planned provocation organized by the representatives of a certain political party”—a clear reference to Avakov’s People’s Front—and bemoaned the police inaction.

The violence in front of SAP and NABU represents a dangerous escalation against anticorruption activists. Last year, activists were followed at the airport, followed in downtown Kyiv by fake journalists, and one was even stabbed earlier this year. Shabunin himself faces politically motivated charges that might put him in jail for five years if he’s convinced. The harassment of activists seems to be getting worse.

The US embassy sensibly wrote, “Titushki intimidating reformers and an ineffective police response is not acceptable in a modern, democratic society.”

But words aren’t enough. The West must insist that authorities undertake a detailed criminal investigation to get to the bottom of who organized the violence. Charging two titushki for administrative “petty hooliganism” is a joke. There are clear signs that one of the most powerful officials in the country—Arsen Avakov—abused the power of his office to organize violent assaults against peaceful activists and the most important anticorruption institution in the country. If evidence of criminal behavior by Avakov emerges, then the United States could use the 2016 Global Magnitsky Act to impose a visa ban and sanctions against him.

Western officials and donors in Kyiv should also focus on Kholodnytskyi’s upcoming disciplinary hearing. Enough evidence exists for Kholodnytskyi to be fired, and while Ukraine’s Western partners should not interfere with the proceedings, they should make clear to authorities that they’ll be watching the outcome closely. NABU and SAP were designed to work in tandem—NABU would investigate corruption while SAP would prosecute the cases—but if Kholodnytskyi continues to block NABU’s cases from being prosecuted, then all of NABU’s work goes to waste.

While some in the West absurdly accuse Ukrainian anticorruption activists of helping to undermine the country’s political system from within, old entrenched elites like Avakov represent the real threat to Ukraine. The West should respond by coming down firmly on the side of Shabunin and other activists.

Image: Head of the non-governmental Anti-Corruption Action Center Vitaliy Shabunin, who was splashed with brilliant green substance, uses a loud-speaker during a rally in front of the Specialized Anticorruption Prosecutor's Office in Kyiv, Ukraine July 17, 2018. REUTERS/Viacheslav Ratynskyi