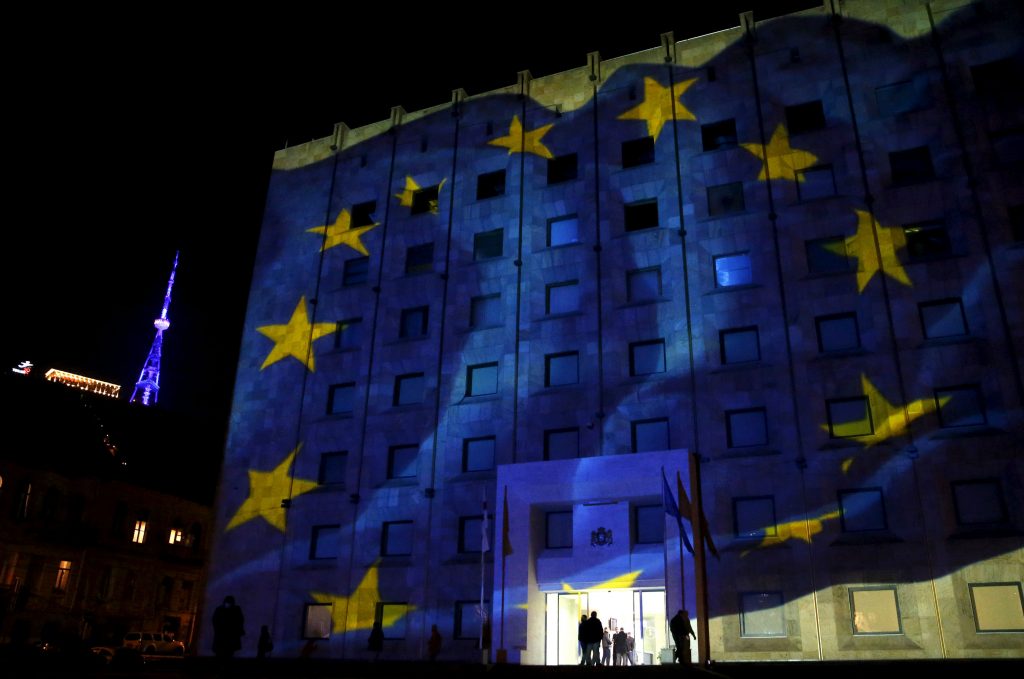 The European flag is projected on the government building as the TV tower is illuminated in blue in the background in Tbilisi, Georgia, December 18, 2015. REUTERS/David Mdzinarishvili

At a time when doors across the West are closing to migrants, one small country has managed to buck the trend: the ex-Soviet republic of Georgia. On March 28, the country secured visa-free travel to the Schengen area of the EU, which includes all member states except Ireland, the United Kingdom, Croatia, Cyprus, Romania, and Bulgaria, as well as to non-member states Iceland, Liechtenstein, Norway, and Switzerland. While this is a landmark achievement for Georgia, counterintuitively, in some respects it is a bigger deal for the EU. Not only does it affirm the EU’s ability to honor its commitments, but it also serves as a timely reminder of the EU’s enduring appeal to its neighbors, and its ability to incentivize reforms and maintain unity in the most difficult of political circumstances. Coming just as the UK files the papers for its separation from the EU, the decision on Georgia should be welcomed by all who still believe in the post-Cold War ideal of a Europe “whole, free, and at peace.”

The occasion was celebrated in Georgia, with Prime Minister Giorgi Kvirikashvili describing it on Twitter as an “historic day,” and the Georgian capital Tbilisi bedecked with Georgian and EU flags. EU leaders also warmly congratulated Georgia. EU Enlargement Commissioner Johannes Hahn encouraged Georgians to “enjoy Europe,” and Lithuanian President Dalia Grybauskaite hailed Georgia’s “commitment to freedom and democracy as an example to the region.”

The achievement is in fact remarkable, given the growing hostility in electorates across Europe—not just toward migration from outside the EU, but even toward the core concept of freedom of movement within the EU. This was one of the motivating factors behind the UK’s Brexit vote last June, and has featured in this year’s election campaigns in the Netherlands, France, and Germany.

Georgia does indeed deserve real credit for diligently doing its homework to meet stringent EU criteria on document security, border management, migration, and asylum, as well as to overcome European concerns about Georgian organized crime and visa violations. The process demanded reforms in many difficult areas, including the adoption of anti-discrimination legislation, highly sensitive in Georgia’s socially conservative society.

On the other hand, Georgia benefited from some advantages. The visa-free negotiations began in 2012, long before the current backlash against mass migration from across the Mediterranean began. As a largely Christian society, Georgia raised fewer of the security and cultural fears prompted by migration from the mainly Muslim countries of the Middle East and North Africa. Additionally, the absolute number of Georgians likely to take advantage of this new travel option is small, given the size of the country’s population (under four million) and the fact that the cost of travel to Europe is beyond the reach of most ordinary Georgians.

Nor is visa-free travel unlimited: it only allows entry of Georgian citizens with biometric passports for up to ninety days in any 180 day period, does not grant work or residency rights, and can be suspended on security grounds. But it has immediate practical benefits, allowing more Georgians to become acquainted with Europe and forge personal and business connections.

However, the deal has geopolitical significance far beyond that. Indeed, the fact that Georgia scraped through is encouraging on many fronts.

First, for Georgians, it is testament to the fact that persistence pays off— an important message for them to hear at a time when some have grown discouraged at the lack of tangible benefits from their EU association so far. It should reinforce their will to continue with other EU-associated reforms. It will also help Georgia’s pro-Western leaders counter the barrage of propaganda emanating from pro-Russian sources that Georgia’s Euro-Atlantic trajectory is futile.

Second, as Georgia gets closer to the EU, it will become harder for members of NATO to argue that the country does not yet meet the alliance’s standards for membership. Indeed, many of Georgia’s friends have argued that its surest route to NATO membership is through the EU.

Third, the fact that the visa-free regime is open to residents of the breakaway regions of Abkhazia and South Ossetia, whose leaders assert loyalty to Moscow, reminds them that other options remain open to them.

Fourth, both for Georgians and other countries in the region considering their options, it is affirmation that even in the most difficult political times, and even at the risk of exacerbating tensions with Russia, the EU is able to honor its commitments. This is in stark contrast to Russia, which plays cat-and-mouse with its neighbors, offering and retracting “goodies” like visa-free travel and market access depending on perceived compliance.

Finally, this development offers hope that the post-Cold War dream of a Europe whole, free, and at peace is still alive. At a time when Euro-Atlantic institutions are facing numerous challenges, exacerbated by concerns over US President Donald Trump’s commitment to both the EU and NATO, some might worry that this decision could end up being the high water mark of Georgia’s movement toward the West. But it can equally be interpreted as a sign that the EU’s policy of engagement and outreach to its neighbors still has legs. Indeed, just as NATO’s formal invitation to Montenegro to join the alliance at its summit last year was a signal that NATO’s Open Door policy remained alive, so this decision on Georgia suggests that the door to further integration with the EU is not closed either. The Georgians have certainly interpreted it that way, with their leaders reiterating that their ultimate ambition remains full EU membership.

It is essential not to overplay this point. The road toward full membership of the EU or NATO remains long and hard, and in today’s political climate, it is even more important to manage expectations about how quickly either will be attained. But the EU’s decision to grant visa-free travel to Georgia is a heartening sign that progress is possible, and that the EU is far from being a spent force. While some Europeans might want to leave the union, it remains a powerful beacon for others. Georgians are right to celebrate this week, and so should we.