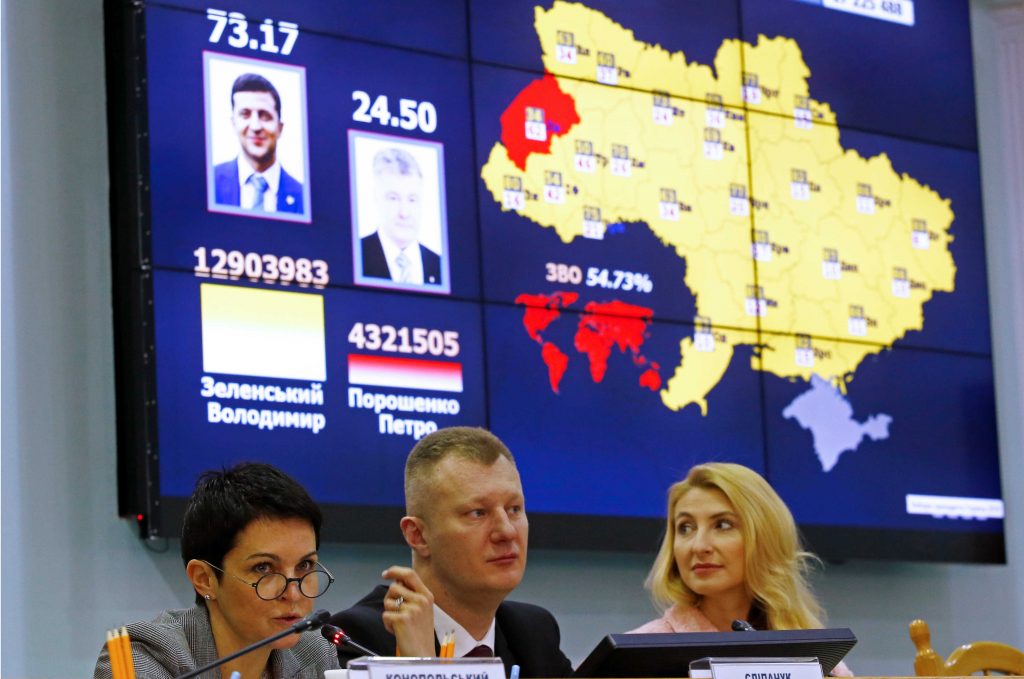 Volodymyr Zelenskyy’s recent landslide victory in Ukraine’s presidential election over incumbent Petro Poroshenko has spawned intense speculation. The most intriguing is the assertion that we are witnessing the long-awaited emergence of a “new” Ukraine that is no longer divided along overlapping regional, ethnic, and linguistic fault lines because Zelenskyy won in all of the country’s oblasts except one.

The notion of a “new” Ukraine is not new. After the Orange Revolution swept Viktor Yushchenko into office in 2014, he repeatedly announced the advent of a “new Ukrainian nation and state.” Poroshenko was no less optimistic after the Euromaidan, assuring Ukrainians of the “birth of a new country.” Both Yushchenko and Poroshenko turned out to be one-term presidents, as voters eventually soured on revolutions that largely failed to revolutionize much of anything.

In its latest iteration, the rationale for a “new” Ukraine is based not on a mass popular uprising as in 2004 and 2013, but on the truly vast geographic scope of Zelenskyy’s electoral success. The results ostensibly demonstrate that the cleavage between the country’s eastern and southern regions, which are largely Russian speaking, pro-Russian, and wary of Euro-Atlantic initiatives, and the predominantly Ukrainian speaking, pro-Western, and demonstrably anti-Russian west, has finally been surmounted. Central Ukraine occupies an ambivalent position between the two.

The issue here is pointedly existential. The persistence of this regional split has posed the most serious challenge to Ukraine’s two most important pieces of unfinished business since the collapse of the Soviet Union, which are completing the process of building a full-fledged political nation and “normalizing” relations with Russia, whose support for the separatist “republics” in eastern Ukraine underscores the fact that Moscow has never come to terms with Kyiv’s divorce from its northern neighbor.

The assertion that the regional breakdown of the presidential vote illustrates that Ukrainians woke up to a “new” Ukraine the day after the election is hardly credible and not supported by the data.

A cursory look at the final vote suggests something considerably less than the kind of Gleichschaltung imagined by the proponents of a “new” unified Ukraine supplanting the “old” divided Ukraine.  Poroshenko wasn’t able to get more than 15 percent in any of the eight oblasts that comprise the east and south. By contrast, in the seven western oblasts—including Transcarpathia and Chernivtsi, which were outliers and voted like the east and south—he averaged 37 percent of the vote, which was more than three times greater than his 11 percent in the east and south.  And in the core Galician oblasts (Lviv, Ivano-Frankivsk, and Ternopil) Poroshenko won 51 percent of the vote. Zelenskyy, meanwhile, scored big in the east and south (87 percent and 85 percent, respectively), but was less impressive in the west (60 percent).

In fact, the results of the first post-election survey in Ukraine show that the regional disparities have not gone anywhere, and a similar picture emerges when we disaggregate polling data by ethnicity and language. Asked to choose between the EU and economic ties with Russia and the other former Soviet republics (except for the Baltic states), 82 percent in the west opted for Europe. In the east, only 37 percent favored the EU; 30 percent in the government-controlled parts of the Donbas; and 25 percent in the south. On NATO, 76 percent in the west wanted to join the alliance. In the east, the Donbas, and the south, the corresponding figures were 32, 21, and 23 percent, respectively. Only 14 percent of western Ukrainians had a positive view of Russia, while in the south that figure was 74 percent. Those who had a favorable opinion of Russian President Vladimir Putin accounted for 2 percent in Western Ukraine; in the Donbas it was 30 percent.

The discussion as to why Ukraine’s 2019 presidential election was so out of step with past experience will continue to spark heated debate. What is clear, however, is the validity of the observation made by one of Ukraine’s leading public intellectuals and former Soviet political prisoner Myroslav Marynovych: Ukrainians want everyone to change—except themselves.

Roman Solchanyk, formerly Senior Analyst for International and Security Policy at the RAND Corp. in Santa Monica, CA, is a veteran Ukraine specialist.

Image: Head of Ukraine's Central Electoral Commission Tetiana Slipachuk speaks during a session, dedicated to the preliminary results of the first round of the presidential election, in Kyiv, Ukraine April 22, 2019. REUTERS/Vasily Fedosenko