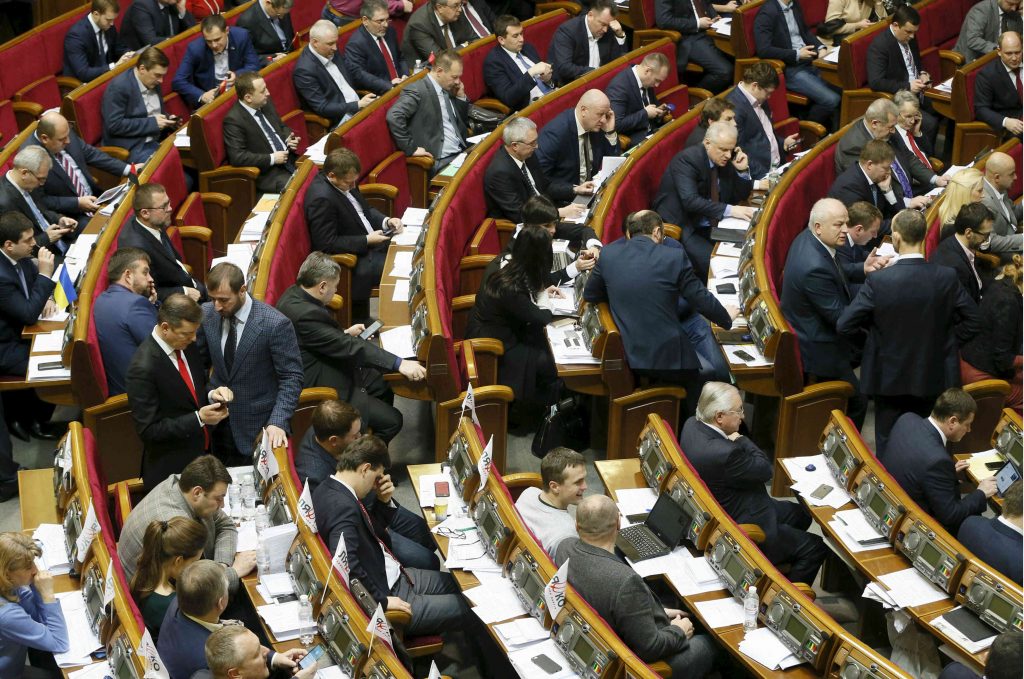 Since the overthrow of former President Viktor Yanukovych, the attitude of Ukraine’s post-Maidan government toward reform could best be described as ambivalent. Last week was a case in point. While Kyiv and its Western partners remained riveted by the fate of Prime Minister Arseniy Yatsenyuk, parliament greatly weakened a key anti-corruption law originally enacted almost one-and-a-half years ago.

In October 2014, parliament passed a law mandating that Ukrainian public officials file an electronic declaration disclosing all of their financial assets, including their ownership of shares in Ukrainian companies and properties. This law—commonly called the e-declarations law—allows authorities to identify corrupt officials by looking for discrepancies between their known income and their actual assets. The law requires the identification of assets directly held by officials, as well as those held by family members, making it much more difficult for officials to hide ill-gotten gains under the names of relatives. Critically, the law also makes public officials criminally liable for filing false information.

“Taken together, the clauses in 3755 effectively destroy any possibility to hold public officials criminally liable. This undermines the entire purpose of the original e-declaration law and makes it practically useless,” said Kotylar.

While the substance of bill 3755 would devastate reformers’ anti-corruption strategy, the procedure by which the bill passed parliament is also troubling. First, the bill was introduced in oral form only, and the vote was rushed through parliament without any public discussion or debate. According to RPR, the bill was introduced by Andriy Denysenko, an MP from President Petro Poroshenko’s own bloc. Moreover, adds Kotlyar, “Bill 3755 was actually prepared the night before the vote in the President’s administration itself. This means that these changes were endorsed at the highest level.” For a president elected on an avowedly reformist agenda, this is very disturbing.

While the bill’s proponents stated that international partners and NGOs agreed with the bill’s amendments, the head of the European Union’s delegation to Ukraine condemned the draft law the next day.

Iegor Soboliev, who heads the anti-corruption committee in parliament, also emphasized the procedural irregularities used to pass the bill. “This law was written and read out in parliament, bypassing all legal procedures, and I only found out about it fifteen minutes before it was read out,” said Soboliev in a February 18 interview.

Soboliev—who described the law as “a step backwards for Ukrainian anti-corruption legislation”—echoed Kotylar’s assertion that the bill originated with Poroshenko’s circle, noting that “as far as I noticed, this law was inspired by two key allies of the President.”

While anti-corruption reformers are understandably disheartened by the passage of 3755, Poroshenko has not yet signed it. It is now time for Ukraine’s Western partners to weigh in. Kyiv remains heavily dependent on financial assistance from the International Monetary Fund, the European Union, and the United States, and Poroshenko should be told in no uncertain terms that further aid to Ukraine will remain frozen until Poroshenko officially vetoes 3755.

To be clear, this type of intense pressure is exactly what Ukrainian reformers want from the West.

Ukraine’s Anti-Corruption Action Center recently pleaded, “We beg [the] West to help us fight government impunity,” while adding that aid should be frozen if anti-corruption conditions are not met.

During his recent trip to Kyiv, Vice President Joe Biden reportedly demanded that Poroshenko fight corruption, noting that “patience is close to running out.” To help Ukraine’s brave reformers, the West must now turn Biden’s words into action.