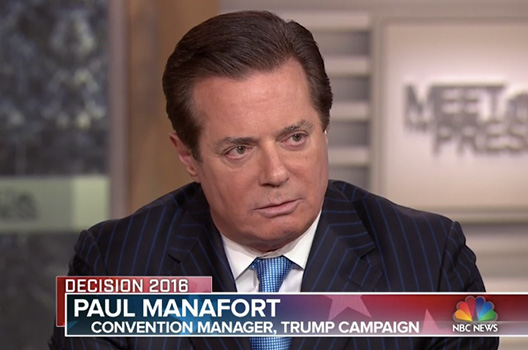 I have seen Paul Manafort twice in my life. The first time was in 2007 during a Ukrainian lunch at Morosani Hotel in Davos, Switzerland, where Viktor Yanukovych came to speak. The second time was at a solemn reception in honor of Yanukovych’s 2010 inauguration at the Ukrainian House in Kyiv; Manfort arrived with oligarch Rinat Akhmetov, who demonstratively and politely made way for this inconspicuous American.

Both times, Manafort refused to talk to the press. Now, two and a half years after Yanukovych’s escape, it is possible to shed light on the details of his work in Ukraine, thanks to the so-called “black ledger of the Party of Regions.” The ledger recorded the illegal cash Yanukovych and his entourage spent on politics. Manafort’s name appears in the explanatory notes of twenty-two transactions over five years, for an estimated total of $12.7 million.

To promote his client, the Party of Regions, Manafort exploited the most sensitive issues in Ukrainian society, advising the party to raise topics that divide the country. For example, the infringement on the rights of Russian speakers that became a major controversy during the 2010 presidential election did not actually exist.

Manafort was recommended to Yanukovych by Akhmetov, Yanukovych’s lifelong business and political partner. Thanks to the oligarch’s referral to his Donetsk protégé, Manafort became a consultant to Yanukovych after his electoral defeat in 2004 and organized four election campaigns, including one presidential and three parliamentary races.

Moreover, Manafort also helped the government deal with challenges. For example, when Yulia Tymoshenko’s conviction began to tarnish Yanukovych’s image in the West, the strategy became to clean up his reputation by denying political motivation in her criminal case. For that reason, the presidential administration called in influential American lawyers from Skadden law firm, including Gregory B. Craig, former counsel to President Bill Clinton. It was a no-bid contract worth one million dollars. Today, this episode has formed the basis of a criminal case against former Minister of Justice Oleksandr Lavrynovych.

After Yanukovych’s escape, records indicating Manafort’s involvement in this case were found in the house of former Prosecutor General Viktor Pshonka. It turns out that the consultant was reviewing the American lawyers’ report, which said, “Skadden is planning to finish the report by the end of next week and send it to Pshonka and Paul for review. Paul does not want to pressure them in expediting it as the quality is of top priority. Also, Paul is asking to clarify if SV had spoken with the Prosecutor General in regard to the ‘damage issue’ caused by Tymoshenko. It is critical for the accuracy of the report.”

The name Paul mentioned in the note is Manafort; and the initials SV refers to the former head of the Yanukovych administration, Serhiy V. Lyovochkin.

In addition to advising Yanukovych and his inner circle, Manafort was in contact with US ambassadors, trying to convey Yanukovych’s vision to them, even though he had not registered as a foreign lobbyist with the US Department of Justice, a glaring violation of the Foreign Agents Registration Act. The FBI has already shown interest in the multi-million dollar transactions of the Party of Regions.

After Yanukovych’s collapse, Manafort lost popularity, although he tried to stay in Ukraine a little longer. He helped the oligarch Dmytro Firtash, who was arrested on a US warrant in Austria and prosecuted for bribery, get off scot-free.

In recent weeks, Kyiv has been surrounded by American journalists who came to trace Manafort’s history. The exposure of his corrupt ties to Yanukovych has become a key topic in the US presidential election. Realizing that Manafort’s presence on Donald Trump’s campaign staff was hurting the candidate’s ratings, the toxic political technologist was let go. Manafort ostensibly resigned, and was thanked by the Republican presidential nominee for his work.

But in Ukraine, the Party of Regions’ corrupt schemes won’t be forgotten so quickly. Manafort’s name appears next to payments to Ukrainian politicians, judges and members of the Central Election Commission, and journalists. Many of those who were in opposition to Yanukovych are among the recipients of those funds. So far, however, none of the implicated Ukrainians has confessed. As a result, publication of the full content of the black ledger of the Party of Regions could yet become Ukraine’s Watergate, which would unleash a cleansing of Ukrainian politics.

Sergii Leshchenko is a member of parliament in Ukraine and former deputy editor of Ukrayinska Pravda. This article was originally published in Russian by Novoe Vremya. Translation was done by Vera Zimmerman.

Image: Paul Manafort in an August 2016 interview with Chuck Todd on "Meet the Press." (NBC)