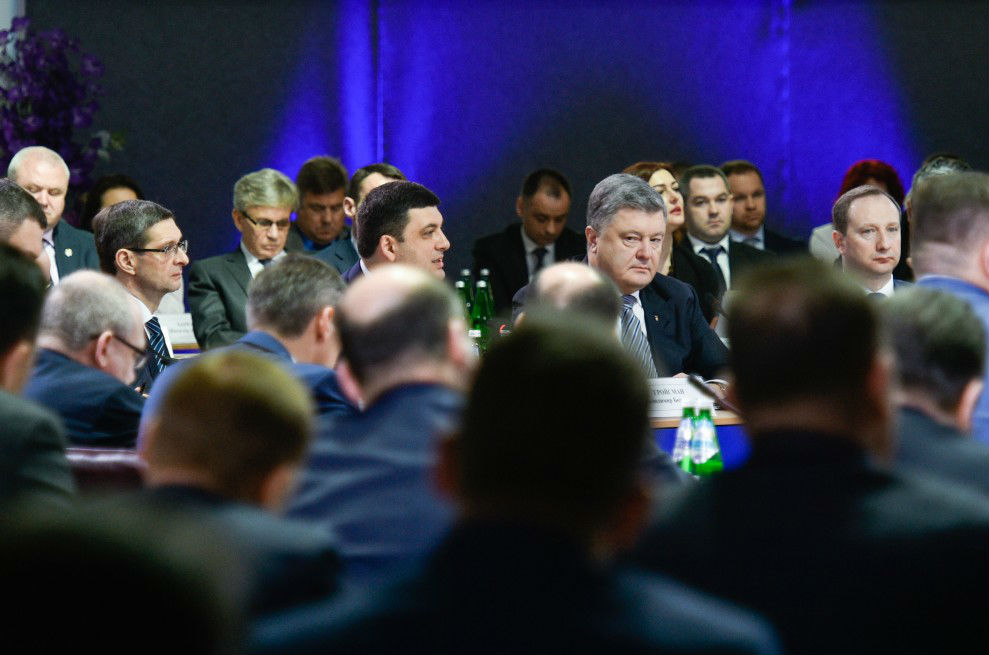 At the fifth session of the Regional Development Council on March 20, President Petro Poroshenko said he expects the new Supreme Court of Ukraine to start working soon. Credit: Presidential Administration of Ukraine.

In his recent Wall Street Journal op-ed, “Positive Change Is Happening in Ukraine,” Prime Minister Volodymyr Groisman’s glosses over the real driver of a business-friendly climate: the courts. He fails to mention the courts, judicial reform, or the process to rebuild the Supreme Court, a process which is being sabotaged.

Ukraine’s judiciary is riven with graft and widely distrusted. Establishing a new 120 seat Supreme Court—with lifetime appointment for judges and candidates chosen from scratch—is a key part of reform.

The PIC was created to ensure that civil society experts could weigh in on the merits of Supreme Court candidates. Composed of twenty members chosen by reformist NGOs such as Transparency International Ukraine, the PIC provides the HQCJ with a recommendation on whether each applicant possesses the required professional ethics and integrity to serve on the Supreme Court.

Once the HQCJ has completed the evaluation process (it’s currently three-quarters of the way through), it sends a list of recommendations to Ukraine’s High Council of Justice (HCJ), a state agency responsible for the nomination of judges. The HCJ then takes this list and makes its final recommendation on each candidate to President Petro Poroshenko.

Reformers consider the PIC the only hope for rebooting the new Supreme Court with honest judges, but it only plays an advisory role. To date, the HQCJ has ignored PIC’s negative evaluation of candidates seventy-five percent of the time, which means a substantial risk exists that a large majority of the new Supreme Court will be the same type of corrupt or incompetent judges Ukraine so desperately needs to replace. The failure to select honest jurists for the Supreme Court will put the nail in the coffin of judicial reform just as the process is getting started.

In a written statement, Sergii Koziakov, chairman of the HQCJ, said: “Not all PIC opinions are sufficiently substantiated to exclude a candidate from competition. Sometimes the candidate provides explanations and evidence rebutting PIC opinion, or the PIC opinion is based on speculations or information from unreliable sources, or lacks proper evidence, or double standards.”

However, the HQCJ evaluation contains a number of obvious flaws which the organization has used to override PIC’s recommendations. First, the HQCJ votes in secret and does not publish a list of individual votes even after the vote.

Second, the selection process is subjective. Candidates are evaluated by the HQCJ on a 1,000 point scale. However, only 300 points of the evaluation is based on test scores, with the remaining 700 allocated on purely subjective criteria behind closed doors. And even then, a statistical analysis demonstrated that many test scores were probably manipulated.

As a result, a number of corrupt judges are likely to end up on the Supreme Court. One example is Judge Pavlo Vovk. In one eyebrow-raising case, Vovk helped a judge who ordered the notorious Berkut to disperse Euromaidan demonstrators obtain an expensive service apartment in December 2013 that was later privatized and sold.

Another example is Ninel Marynchak, a judge of the High Administrative Court. After claiming her judicial salary was her only income, she was able to purchase numerous valuable plots of land and large houses for both herself and her son.

For the HQCJ to ignore the negative assessments from the PIC of such ethically impaired candidates is inexcusable. Luckily, all is not yet lost.

Some good judges are still in the running. Activists will be watching to see if honest judges like Serhiy Bondarenko of the Cherkasy Oblast Court of Appeal makes the final cut. In 2013, Judge Bondarenko released a recording of the head of the court, Judge Volodymyr Babenko, pressuring him to make a decision and reported it.

But time is running short.

“It’s critical for the international community to emphasize to the HQCJ that it should not approve all 120 judges now,” said Mykhailo Zhernakov, a former judge and lead expert on the judiciary for the civic group Reanimation Package of Reforms. This pressure will allow civil society to push for changes to the selection procedure before a second round of evaluations begins.

Additional legislation must be adopted that accounts for the mistakes that were made at this stage and improves competition procedures. Bill 6363, currently before Ukraine’s parliament, must be adopted along with procedural codes that the Rada will consider next week.

Given how critical judicial reform is to Ukraine’s future, it’s time for senior officials from the United States, the EU, and the IMF to make clear to Kyiv that no further financial aid will be disbursed until Ukraine creates a Supreme Court with honest judges that pass PIC’s ethical reviews. Now is not the time for the IMF to go wobbly. The Ukrainian government wants another tranche this fall, and this is an opportunity to show Kyiv that the international community means business.