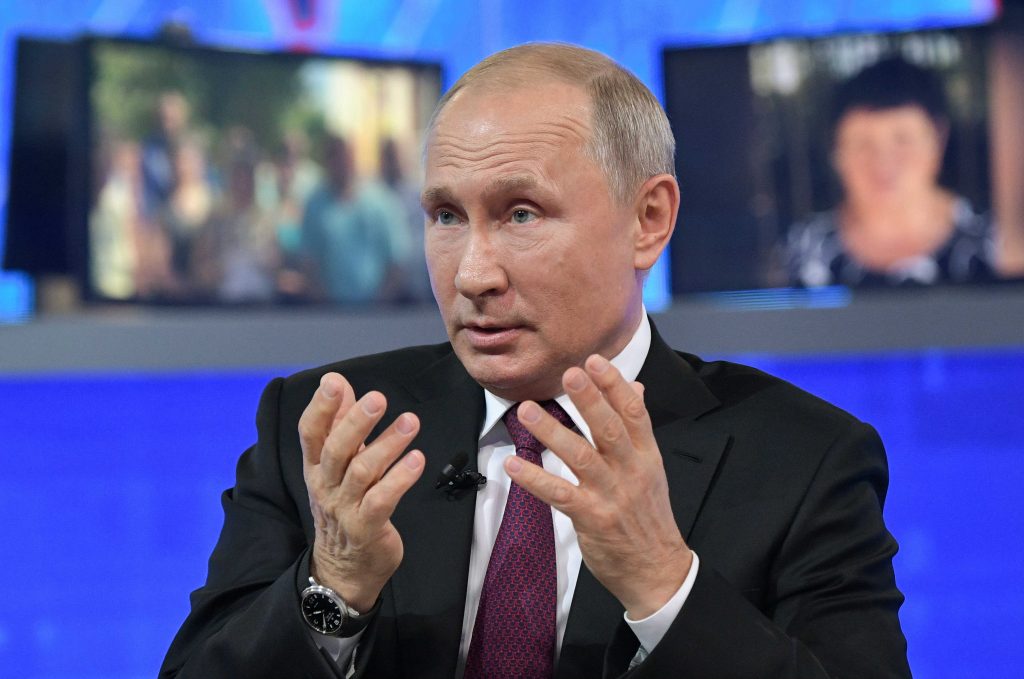 In his annual television marathon “Direct Line with Vladimir Putin” on June 20, the Russian president did something unusual. To my knowledge, this is the first time he specified the impact of Western sanctions on Russia, which he usually presents as having a positive effect on the Russian economy because of import substitution.

“Look, according to expert analyses, Russia fell short by about $50 billion as a result of these restrictions during these years, starting in 2014. The European Union lost $240 billion, the US $17 billion (we have a small volume of trade with them) and Japan $27 billion. All this affects employment in these countries, including the EU: they are losing our market,” Putin claimed, not very coherently.

None of these numbers makes any sense. Putin did not clarify whether he meant GDP, trade or exports. Nor did he say how these figures were calculated. Did they take into account the changing oil price, for example? Only the time period is reasonably clear, five years since July 2014. When Putin cites unnamed experts, he usually refers to his personal assistant Sergey Glaziev and his collaborators who come up with his wild figures. No number is too unrealistic for Glaziev.

The best assessment of the impact of sanctions on the Russian economy remains an IMF paper of 2015. It concluded: “…sanctions and counter-sanctions could initially reduce real GDP by 1 to 1.5 percent. Prolonged sanctions could lead to a cumulative output loss over the medium term of up to 9 percent of GDP, as lower capital accumulation and technological transfers weakens already declining productivity growth” (p. 5).

The main economic impact from Western sanctions comes from financial sanctions. They have reduced the international credit available to both the public and corporate sector in Russia. In five years, Russia’s total foreign debt declined from $729 billion in December 2013 to $468 billion in March 2019, according to the Central Bank of Russia. This reflects a corresponding reduction in investment.

According to the International Monetary Fund, Russia’s GDP has averaged  $1.58 trillion from 2014 to 2018. That means that the annual loss to Russia from sanctions would be $16-24 billion a year and $80-120 billion for five years. That is about twice as much as Putin claimed in case he referred to GDP.

The best study I am aware of that assesses the impact of sanctions on Russia and counter-sanctions on Western economies is a paper from 2017 by Daniel Gros and Mattia Di Salvo from the Center for European Policy Studies in Brussels. They concluded that the impact on the EU economy was negligible. This is easy to comprehend. The Russian market is small and trade with the country can easily be relocated to other markets with minimal costs. Putin’s numbers here make no sense. The United States and Japan could not have suffered. US-Russian trade has actually increased. Employment has risen substantially in all Western countries during the period in question.

The conclusion is that we are best advised to ignore Putin’s numbers. What is interesting is that he acknowledged that Russia’s economy suffers from sanctions and does not benefit as he has claimed before. His next step? He will try more vigorously to convince the West to ease sanctions.

By comparison, the impact of Russian sanctions on Ukraine has been far greater. Russia has cut a much larger share of its trade with Ukraine – about 80 percent from 2012 to 2016, and it imposed new trade sanctions on Ukraine at the end of 2018 and again from June 1. The Russian share of Ukraine’s trade used to be more than one quarter. Much of the Ukrainian exports to Russia, notably armaments which comprised one-third, could not be easily diverted to other countries. Russia’s warfare during the last five years has scared away foreign investors from both countries. On top of that, Russia took Ukraine’s territories that generated 14 percent of its GDP and drove up Ukraine’s military costs.

The insight that finally has reached Putin is that economic sanctions are costly, and they can be very costly.

Anders Åslund is a senior fellow at the Atlantic Council and author of the new book “Russia’s Crony Capitalism: The Path from Market Economy to Kleptocracy.” Follow him on Twitter @anders_aslund.