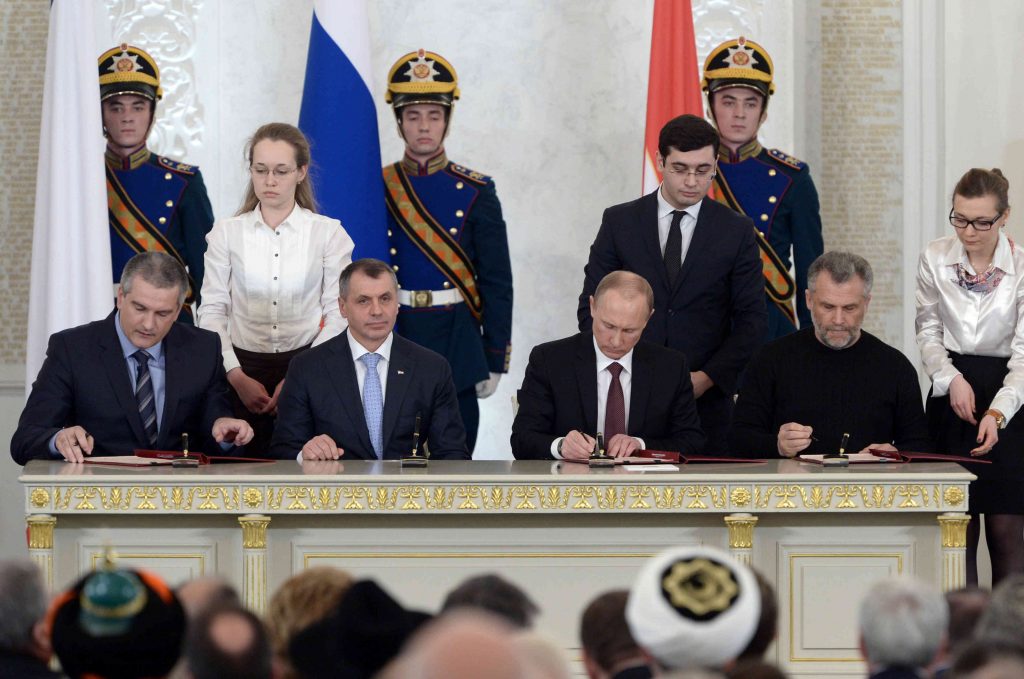 After US Secretary of State John Kerry’s visit to Sochi on May 12, a barrage of articles urged Western leaders to provide Russian President Vladimir Putin with an off-ramp for his various Ukrainian adventures. Even more disheartening than the volume was the growing diversity of reasons for giving Putin a pass. At least three arguments were made.

The first and oldest was familiar enough. As framed, the position asserted that an arrogant West, post 1991, repeatedly antagonized Russia by promoting expansion of the European Union and NATO, initially among Russia’s old Warsaw Pact allies and eventually in the former Soviet space. With Ukraine, to which Russia felt strong historical and cultural links, a red line was drawn. Putin, supported by the Russian public, decided to put an end to the triumphalist nonsense. The measures he took in Crimea and eastern Ukraine, if understood against the stated background, made good sense.

The second and more recent justification was a more focused version of the first. Putin and Russia were no longer interested in the geopolitical project known as the Soviet bloc. But they did seek recognition of their primacy in the world of Eastern Orthodox Christianity—or Russkiy Mir (“Russian world”). The grab for Crimea was instinctual; it returned to Russia the land where its ancient Prince Vladimir accepted Christianity—in contrast to the Ukrainian claim that Kyivan Prince Volodymyr converted on the banks of the Dnipro River. Framed against the posited background, Putin’s efforts bore an undeniable logic.

The third narrative was made of different cloth than its predecessors. The central point was that Putin was not actually planning anything. Noticing the chaotic interregnum between former President Viktor Yanukovych’s fall and the consolidation of the Euromaidan government, the Russian President used the opportunity to seize Crimea. When no one stopped his grab in Crimea, he used the same playbook in the Donbas. In short, the Russian leader was basically winging it. If so, why give him a pass? Precisely because his ad hoc approach was capable of causing an accidental conflict—a twenty-first century echo of Barbara Tuchman’s Guns of August, when great powers blundered into World War I.

The first position was essentially an open apology for Russian aggression and could be easily portrayed in that fashion. The second construct was simply a more sophisticated version of the first and could be treated as such. The third construct presented a real problem; it could, given the right informational sell as an assessment closest to reality, win over the hearts and minds of many in the West.

There’s a kernel of truth to the third position. The downing of Malaysian Airlines flight 17 played into the narrative that Putin was winging it. If Russian proxies or Russian regulars were guilty, which looks increasingly likely, the seat-of-the-pants notion gains credibility. Russia gave weapons and trained rebel forces to wreak havoc in eastern Ukraine. But it’s impossible to control weapons once they’ve been distributed.

The assassination of Russian opposition leader Boris Nemtsov also fits into the storyline that Putin was making it up as he went along. Chechen leader Ramzan Kadyrov most likely ordered the hit. But why wasn’t Kadyrov immediately brought to justice? Because Putin was no longer in full control of the situation. After the Nemtsov assassination, Putin disappeared for 10 days.

It’s not quite that simple, though. Even if MH17 and the Nemtsov assassination got out of Putin’s control, there’s still evidence that the Russian President isn’t winging the big picture.

Putin acknowledged in a documentary that he planned and orchestrated the military takeover of the Crimean peninsula.

Run-ins between Russia and NATO first began to rise in September 2013, six months before the invasion of Crimea and three months before the Euromaidan emerged. In fact, the run-ins coincide with when Putin first started to push the Yanukovych regime to relent on a Deep and Comprehensive Free Trade Agreement with the EU. Moscow did everything it could to block Ukraine from signing the EU Association Agreement, and its campaign to dissuade the country from doing so indicates long-term planning and pre-meditated action.

A memo about the Bessarabian People’s Rada chronicles the on-goings of a mélange of Russian intelligence operatives, supposed Bulgarian ethnic separatists in Ukraine, Russian-speaking refugees from Moldova and supporters of an Odesa Porto-Franco initiative looking to push for autonomy for Bessarabia as an optimal goal and a free port in Odesa at a minimum. The intricacies of the operation, meant to “push Ukraine into non-viable forms of decentralization,” are complicated. The detailed plans indicate years of preparation, not something that was cooked up overnight.

A Ukrainian government official in Washington familiar with Russian intelligence operations confirmed the scope of the Bessarabian operation to me.

Don’t be fooled into thinking that Putin is improvising in Ukraine. The big, geopolitical decisions in Russia don’t happen without his blessing or knowledge. Putin’s isn’t winging it, and neither should we.

Walter Zaryckyj is Executive Director of the Center for US-Ukrainian Relations.

Image: On March 18, 2014, Russian President Vladimir Putin signed treaties to annex Crimea. A year later, Putin acknowledged in a documentary that he planned and orchestrated the military takeover of the Crimean peninsula. Putin isn’t improvising in Ukraine. The big, geopolitical decisions in Russia don’t happen without his blessing or knowledge. Credit: Kremlin.ru