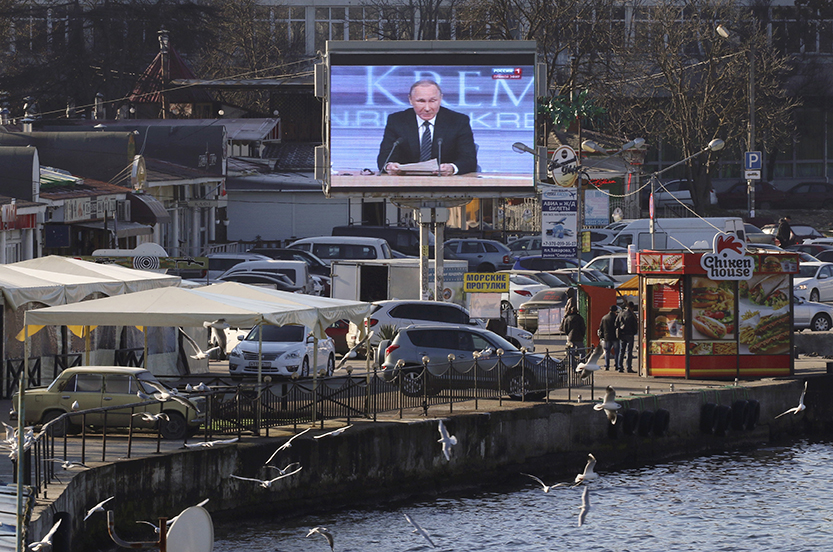 Vladimir Putin’s 10-day disappearance shortly after the murder of opposition politician Boris Nemtsov and his triumphal reappearance after the broadcast of a 150-minute documentary on state television, suggest a more erratic—and aggressive—policy course in Russia. Here’s why.

After Putin’s disappearance on March 5, the Russian media and the blogosphere dealt with little else.

However, the main “Putin event” was not the resurfacing of the Russian President at a meeting on March 16, but the airing of a documentary commemorating the first anniversary of the annexation of Crimea the day before.

In the film, Putin accused the United States of staging the Euromaidan revolution in Ukraine. He took full credit for the major, bloodless victory in Crimea. He skirted the issue of fighting in Eastern Ukraine as much as possible.

While the film is supposed to boost Putin’s popularity, it suggests several chilling conclusions:

Putin has little respect for international norms or law. He ignores the fact that Crimea is the territory of a sovereign neighboring state, and its takeover is an act of aggression by any definition of international law.

Putin was in charge of the Crimean operation. He ordered Russian security chiefs to “take steps” to annex Crimea on February 22, 2014, when it became clear that Ukraine’s President Viktor Yanukovych might be swept from power. This admission undermines any talk about the legitimacy of the staged “referendum” in Crimea, which took place three weeks later.

Putin had his eye on Crimea long before February. Putin admits that he ordered the Russian Special Forces—the Spetznaz of the Main Military Intelligence Directorate (GRU) and the naval infantry—to prepare for the takeover of the peninsula for “reunification.”

The Russian leader understands the power of nationalist rhetoric. Putin justified the takeover as protecting a Russian majority on the peninsula. With clusters of Russians residing in Estonia, Latvia, and Kazakhstan, these countries may be next.

Putin pays keen attention to domestic sentiment. Putin admits that he moved against Crimea based on secretly ordered and clandestinely executed public opinion polls. He ordered polls inside Russia before bringing the vote on annexation before the Russian parliament. Given Putin’s control of national television and an incessant stream of propaganda about “Ukrainian Nazis,” it is unsurprising that public opinion favored annexation.

History matters. In the past, Putin has talked about an “insidious” American plan to establish a NATO base in the port of Sevastopol in Crimea. In the film, he claimed the ties to the then-Byzantium-controlled peninsula based on the 10th century Kievan Rus conversion to Christianity justified the takeover.

Putin visibly enjoys recounting his direct command of the operation. In fact, he does not give credit to any of his fellow leaders, and Minister of Defense, Sergey Shoigu, receives a mild berating.

The Russian President is comfortable with the use of violent “informal structures,” which includes organized crime. The film highlights the use of the Night Wolves, a violent ultra-nationalist biker gang, as essentially a special forces unit serving the Kremlin.  This is a political approach known in czarist Russia since the Black Hundreds, the ultra-nationalists who used to kill and rob the Jews and political opposition.  Vladimir Lenin, the father of the Soviet state, used a Georgian bank robber named Joseph Dzhugashvili (Stalin) to fill the party coffers.

Russia’s use of massive off-the-books violence bodes ill for Europe: On March 22, representatives of ultra-nationalist and far right parties conducted a congress in St. Petersburg, hosted by the radical nationalist Russian party “Rodina” (Motherland), founded by Deputy Prime Minister Dmitry Rogozin. These parties, like Greece’s Golden Dawn and Germany’s National Democrats, have their own violent wings that harken back to the darkest days of 20th century Europe.

When these parties are manipulated by a nuclear superpower headed by a secret police operative, European unity and trans-Atlantic ties are under threat. Meanwhile, reports of Russian support of the European extreme left and extreme right are growing.

Finally, Putin stresses that his military is confident in its operational art and in its supreme commander, and he admits that he considered putting the country’s Strategic Nuclear Forces on high alert for the first time since the end of the Cold War.

The film is a warning to Ukraine, to other countries of the former Soviet Union, and to the West that while Putin prefers to have his victories bloodless, he will use all the tools of the state. He has read Sun Tzu, the military theorist who taught that the highest order of victory is when the enemy surrenders without a fight—which was demonstrated in Crimea.

The Crimean operation was an opening act in a new confrontation between Russia and the West. The new Putin documentary demonstrates the scope of the threat that the Euro-Atlantic world is facing.

Ariel Cohen is Principal at International Market Analysis Ltd, and Director, Center for Energy, Natural Resources and Geopolitics at the Institute for the Analysis of Global Security.